Trending
You are at:Home»Reviews»Opel Corsa-e review
By Michael Sheridan on 07/07/2020 Reviews 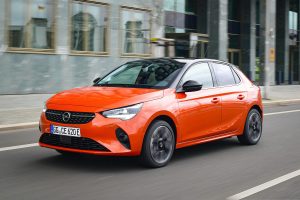 Multi fuel is the hot automotive phrase at the minute. Our test car this week is a supermini that can be powered by either petrol, diesel or electricity. I’m afraid there is no prize for guessing what our Opel Corsa-e runs on. 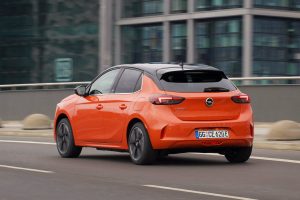 The German brand’s most recent models have gained greatly from the many economies of scale being part of the PSA Group brings. Under the seventh generation Corsa’s sculpted skin you’ll find the same structural and mechanical bits found in its French stablemates. Platform sharing is nothing new yet the Corsa and its sister car the Peugeot 208 look quite different. There was a real fear that Opel would lose its identity when it was taken over/rescued by the PSA Group but thankfully that hasn’t happened. The massive German and French markets have their own loyal buyers and Opel has been encouraged to put its twist and identity on cars. Opel today generally differs from its gallic siblings of Peugeot, Citroen and DS with conservative but smart exterior styling and conventional interior design. Opel’s default ride quality favours a firmer set up that is at home on the autobahn. 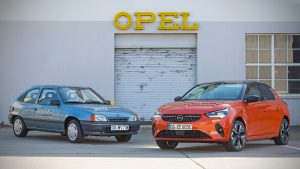 Opel’s new supermini hatchback may be joining a sector in decline as everybody and their dog wants SUVs – but small cars are still big sellers. Corsa-e, net of grants and rebates, starts from €27,338 (SC grade and our test car. This asking price is still very high on the surface and an amount that would buy a car a full size bigger in the next class up. But and its the most important but, when you factor in total ‘cost of ownership’ (running costs/fuel etc.) the electric powered Corsa comes in a lot closer to fossil fuel powered versions. 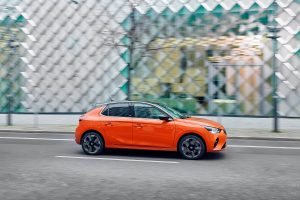 The first Corsa ‘A’ came along in the early 1980s and we are now on to Corsa ‘F’. Opel’s most sophisticated Corsa yet by some margin is quite a handsome machine. The five door looks sharp and quite substantial and has lost some of its softer curves. It is longer and wider than a Toyota Yaris or Ford Fiesta but has a lower roofline than both (1435mm) and this combination delivers a better stance on the road. 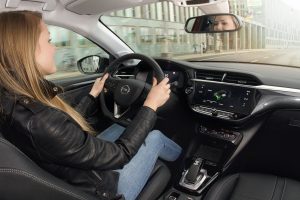 All versions of Corsa get the same sized boot and at 309 litres it is larger than Fiesta and Yaris. The rechargeable 50kWh battery is neatly stowed under the rear seats and floor with no impact on space as the platform was designed from the off to be ‘multi fuel’. The rear seats fold, as you’d expect, to deliver more space. Rear legroom in my automatic is particularly tight behind my seat as I tend to sit a little further back in automatics. 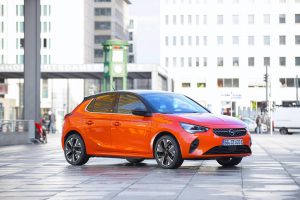 On the road three driving modes can be selected depending on your wishes but for the most part I left the car in the middle comfort mode. Acceleration is brisk and urban and motorway traffic was handled with ease and confidence. The car is hushed at low speed but it does get noisier in the cabin at speed and this is due to road, tyre and wind factors. 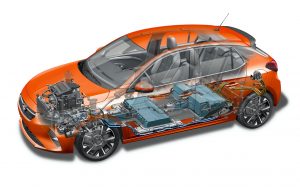 Corsa-e has a quoted range of up to 337 kilometres in the WLTP cycle. This means the driving you might need to do in a day can be done from an overnight charge. I did 250kms one day without having to drive it like I was on an EV economy run. I was also able to manage good electricity consumption with minimal effort and recorded sub 16kW per 100km too. Its 50kWh battery with a combo CCS socket can charge to 80% capacity in 30 minutes at a public fast charger. Zero to 100km/h takes in 8.1 seconds. Behind the wheel it is a little dull compared to a 208 – maybe I’m more French than German! Unlike the pug Corsa’s steering wheel is a regular size and the lights are operated by a dash-mounted rotary dial (a must in Opels). Standard equipment is very good by supermini class standards. Lots of connectivity and ADAS driving safety systems are available. The grade structure delivers nice increments as you part with more cash. 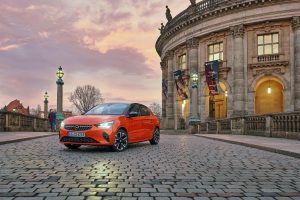 The new Opel Corsa range starts from €17,975 and is a smart and desirable small car. The fact it is multi fuel with no overt penalties puts it (and its sister car) right up there as class leaders.