Trending
You are at:Home»Reviews»Opel Crossland X review
By Michael Sheridan on 28/07/2017 Reviews 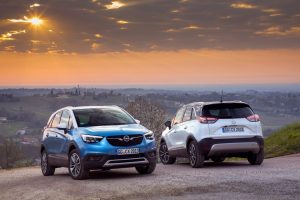 Crossland X sounds like the title of a spy novel but it is in fact it is the latest crossover from Opel.

The rise and rise of the crossover SUV is the result of buyers loving the high driving position, ease of use and chunky styling. This SUV X factor of sorts has been recognised by Opel hence the new X range.

The Mokka X was the first Opel X although it wasn’t an all new model, rather a renaming of Mokka’s mid life facelift! Anyway, it is now joined by the Crossland X that replaces the Meriva compact MPV. In a short while a larger Grandland X will join the Opel range and it will go up against the likes of Hyundai’s Tucson, Nissan’s Qashqai & co. 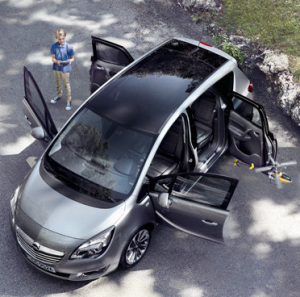 The quirky Meriva with its rear opening rear doors has been axed and the Crossland X takes over but at a dearer price point. Crossland X was conceived in partnership with the French giant PSA group prior to its takeover of the financially troubled GM brand. Crossland X is built using a modified version of PSA’s Peugeot 2008 platform and dips in to the PSA range of engines. The target rivals include the big selling Renault Captur (from €19,790), Peugeot 2008 (from €19,400) and Nissan Juke (from €19,995). Crossland X is pretty similar in size to the all-Opel Mokka X but features less chunky styling. Unlike Mokka X that has an option of all wheel drive, the Crossland X is front wheel drive only and designed for urban use. 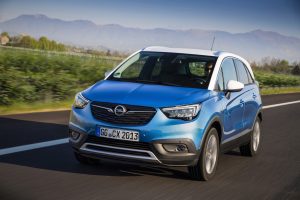 On the road, well…, look nobody buys a crossover to burn up the road. Crossland X is not a hot hatch and should be judged on its ride quality and passenger comfort. The compact car is among the best in its class but remember its class is at the budget end of the crossover/SUV market and savings have to be made during manufacturing. My test car had the range topping diesel with 120hp and a manual six speed gearbox. The 1.6 litre car produces 300nm of torque and could easily spin up the front wheels if provoked as Crossland X is quite light. Keeping up with motorway traffic is not an issue although engine noise under acceleration is. 0-100kph takes just under 10 seconds. Sadly the large cabin and use of cheaper hard plastics means that a lot of road noise leaks in. The Crossland X is a bit of a Tardis as its cabin is huge compared to its exterior. Crossland X is just slightly longer and a wee bit narrower than the Renault Captur. If you look at the rear of the car you can see a compact the little thing is, but once inside the Crossland X delivers really good family-car space. From a driving dynamics perspective I had no desire to take the long or twisty way home. 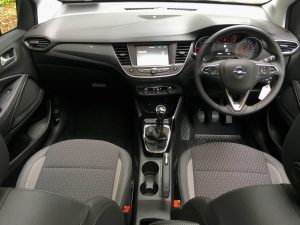 The boot has a 410 litre capacity that can expand to 1,255 litres with the rear seats down. An optional versatility packs allows greater movement of the rear seats. Two well equipped grades are offered in Ireland, namely the SC and SE range topper. Among the equipment highlights, both get Opel’s OnStar* internet connectivity with WiFi hotspot, R 4.0 Intellilink touchscreen audio (CarPlay and Android Auto), Bluetooth phone/audio connectivity. Traffic sign recognition and lane departure warning are available also. The €22,995 SE gets in addition to SC 17 inch alloys, rear parking sensors and tinted rear glass and contrasting roof colour. 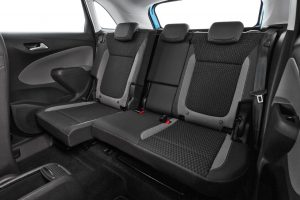 Some other luxuries available include a head up display (pop up type). The HUD displays the car’s speed, nav directions and prevailing speed limits. A 180 degree panoramic rear camera with a zoom function offers a great field of vision. Parking assistant, auto parking, is available also but as with many of these functions they seem a little silly in small cars that should be easy to park anyway. Forward collision alert features in Crossland X and Opel says the driving aid will autonomously stop the car from 30kph safely without a collision. Bright LED headlights with cornering function and auto full beam are available too. 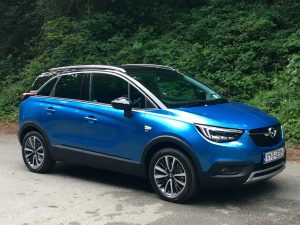 There is a total of four Euro 6 engines in the range: The entry point is a three cylinder petrol 1.2 with 81hp/118nm coupled to a five speed manual gearbox. A turbo charged three cylinder 1.2 petrol with 110hp/205nm comes with a six speed automatic gearbox. A five speed, four cylinder 99hp/254nm 1.6 litre turbo diesel is the entry oil burner completes the SC engine range. The SE grade gets another engine option, a tax band A3 120hp turbo diesel (105g/CO2) four cylinder that was fitted in my test car. It is a frugal unit delivering on average 4 L/100km (70mpg).

*Opel’s OnStar has a number of great features like its automatic crash response function that phones for emergency help in a collision. If your car is stolen the car can be prevented from staring again once you have informed Opel. If you lose your car in a carpark you can flash the lights of beep the horn. The WiFi hotspot allows for great connectivity for all occupants too. A human advisor is a button press away and they can offer all sorts of assistance to you also. 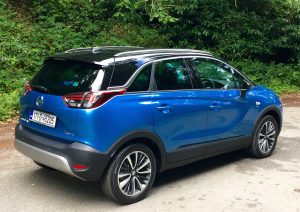