Trending
You are at:Home»Reviews»Opel Grandland X review
By Michael Sheridan on 16/02/2018 Reviews 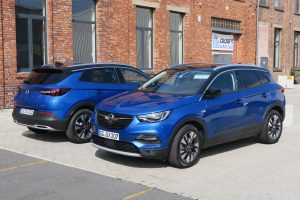 Opel thinks we need another family crossover, but do we really? Isn’t Opel a little late in joining the party? 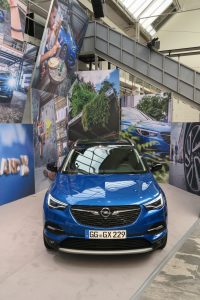 So why is the German five seater so closely related to the Peugeot 3008? Since August 2017 the famous Opel brand is under French ownership. GM, after a few attempts, offloaded the loss making German vehicle maker to the PSA Group. PSA is an industrial giant and famous for making Peugeot, Citroen and DS branded vehicles. PSA is well aware of Russelsheim’s strong market share in Europe and smart enough to let the German brand do its own thing – at least for now. Behind the scenes massive economies of scale will eventually kick in and a return to profitability in the near future looks likely (circa 2020). In the coming years we can expect a lot of sharing of engines, platforms and components going forward. The compact Opel Crossland X (http://motorhub.ie/opel-crossland-x-review) was a joint project with PSA that delivered the Peugeot 2008. This joint venture happened prior to the takeover, a great way of testing the water, that ultimately convinced PSA the deal could work. This week I’m in the second co production, the Peugeot 3008 based Opel Grandland X. At its European launch some months ago I was impressed by the new German as it sets out to make a name for itself in its own right. As a rival to the huge selling Hyundai Tucson, Nissan Qashqai and of course the Irish Car of the year 2018 Peugeot 3008 the Grandland X is realistically another solid offering in the class. Priced slightly higher than its main rivals Opel has decided to go a bit bigger on specification with the Grandland X. There are three trim levels SC, SRi, Elitie and Ultimate and a number of value ‘packs’ and other options available. 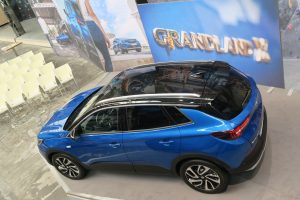 On Ireland’s roads the Grandland X is pleasant enough to use and while the ride is a little firmer than the 3008’s, it still feels composed and comfortable. The convention is that French cars are built for comfort more so than Opel’s firmer autobahn friendly machines. A senior Opel boss told me directly that the firm will keep its ‘Opel-ness’ going forward.  As the Opel is sitting on the excellent 3008 platform the suspension has been tweaked and stiffened slightly with different dampers installed. The steering has been adjusted also, to deliver a more precise feel. While the five seat Grandland X looks quite substantial – it is surprisingly light at less than 1.4 tonnes. This allows smaller than you’d expect engines to be used. My Irish test car features a 1.2 litre PSA three cylinder turbocharged petrol unit with an impressive output of 130hp/230nm. 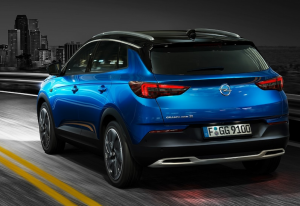 Styling inside and out is conservative next to the highly stylish 3008. This plays more to the traditional German buyer who doesn’t like an overly exciting looking machine. When viewed head on the grille is upright and features the famous blitz badge plus there’s nice detailing lower down like the small winglets. Opel’s signature ‘blade’ indents on the flanks is reworked and a nice detail. The rear is pretty smart too. Squint and the Grandland X and it could be any of a number of C SUV sized rivals. The Grandland X’s boot is 514 litres and is expandable to 1,652 litres with the rear seats down. An inflation kit is standard but you can get a spare wheel from your dealer for circa €150. 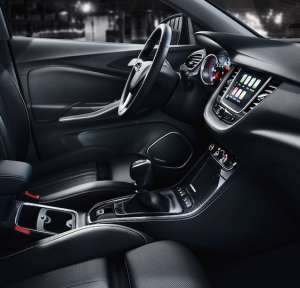 Inside the cabin is ultra conservative next to the Peugeot 3008 but all the familiar switches etc. or Opel-ness is there. Nearly all the high tech we expect from new machines is available including as standard Opel’s OnStar, a WiFi hotspot plus Bluetooth, Apple CarPlay and Android Auto smartphone connectivity. Some options available in the range include a contrast roof paint colour, auto tailgate, heated and cooled front seats, heated rear seats, heated steering wheel, adaptive LED headlights, large sunroof, induction phone charging and a Denon premium sound system with eight speakers and subwoofer. The Grandland X features a number of optional driving aids depending on specification such as: Automatic cruise control with stop function, forward collision warning with automatic emergency braking and pedestrian detection, driver drowsiness alert,

360 panoramic camera with park assist. Those buyers with kids will be pleased to know that child seat anchors are fitted to the passenger and outer two rear seats. The Grandland X has also received a five star rating from Euro NCAP in crash texting.

The smaller Opel Mokka X has a proper AWD option but the Grandland X makes do with the 3008’s faux four wheel drive set up. Opel’s ‘all road pack’ is well worth considering as its ‘IntelliGrip’ system delivers all wheel drive ability from just the driven front wheels. The pack comes with winter tyres and when these are combined with the clever electronic driving aids the Grandland X will deliver near four wheel drive traction and performance. You can select from five modes via a rotary dial: normal, snow, mud, sand and ESP off. The system maximises traction by adapting engine torque and braking to deliver optimum grip with the driving surface. It works brilliantly and is motoring witchcraft at its best. 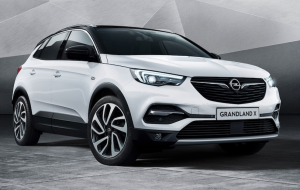 Diesel (1.6/120hp) and petrol power (1.2/130hp) feature with six speed manual or six speed automatic gearboxes available in both. These units will be joined by a more powerful 180hp diesel with an eight speed auto this Spring. A more affordable sub 120hp diesel version is on the way later this year. For higher mileage buyers the 1.6 diesel is a gem. At the European launch it delivered effortless cruising ability on the autobahn. On country roads the car’s pulling power made for uneventful driving. I particularly liked the automatic version as it made life easy. Prices start from €27,995 for the petrol and from €28,995 for the manual diesel. My sporty SRI petrol started at €30,595 but featured €3,120 of options including metallic paint, winter pack 2, premium LED adaptive forward lighting pack and a Denon sound system brought the total to €33,715. 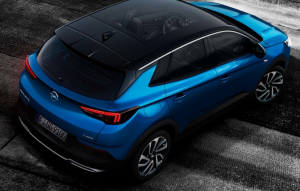 The Grandland X is a little pricey for its class and not as exciting as its sister car but it is a solid effort. The real question is can it turn people’s heads away from the usual suspects that are well established in the sector.