Trending
You are at:Home»Reviews»Peugeot 2008 review
By Michael Sheridan on 22/12/2019 Reviews 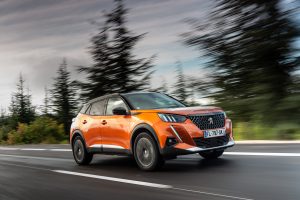 Peugeot’s 208 based 2008 crossover has been a surprise volume seller with over 1m sales to date. Since 2013 the compact five door SUV has grown in popularity in Ireland with over 5,530 sales to date. For a number of years it was Ireland’s best selling Peugeot. The new 2008 takes a big step forward and is now ‘multi energy’, becoming Peugeot’s second model to be available powered by petrol, diesel or electricity. The second generation 2008 features Peugeot’s critically acclaimed design language that has delivered the handsome 3008 and 5008 SUVs. 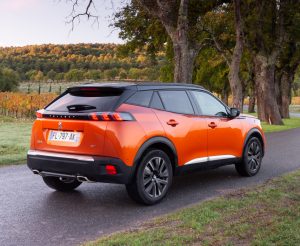 As is nearly always the norm with a new platform the 2008 has grown. The biggest dimensional change sees a 160mm increase in length and a 30mm increase in width. The shared platform is used in the new 208 and other PSA group models and was designed to house rechargeable batteries under its floor. 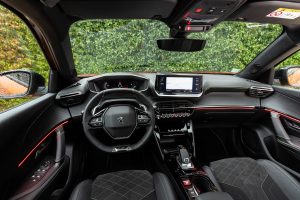 Inside the cabin features the latest generation 3D i-Cockpit. We love its small sporty steering and high set main dials as they help keep driver’s eyes on the road ahead. a load of new toys are available to play with including: 3D Navigation, a 10 inch centre touch screen and awesome 10 speaker Focal sound system. Phone connectivity is improved too. A new phone box cubby for wireless charging also features a phone stand. LED interior lighting adds to the cabin ambiance. The boot loading area is set a little higher but features a split floor. Capacity is an impressive 434 litres expandable to 1,467 litres. 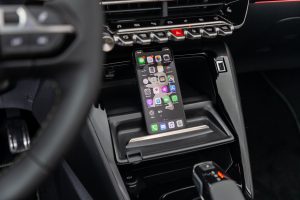 In Marseille at the car’s international launch we drove three fuel types. Petrol and diesel engines will be the mainstay but the e-2008 electric only version will bring a lot of customers to the brand. Our electric e-2008 test cars were pre production – even the airbags weren’t connected. The car pulls very well and goes like a whippet. Having been designed with a battery pack and electric motor in mind there is no comprise on cabin space or design with the EV. 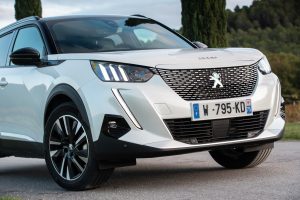 The e-2008’s handling is remarkable and quite conventional. You can spot an e-2008 by its body coloured front grille and ‘e’ lettering on the front side panel and tailgate. The front wheel drive e-2008 features the same 50kWh battery pack from the e-208 to power its 136hp electric motor. A max range of 310km is quoted. A domestic three pin plug takes 16 hours to deliver a full charge. A high output domestic EV wall box (7.4kW) will do the job in 8 hours. A public 11kW slow charger will take 5 hours 15 minutes. 30 minutes at a 100kW fast charger via its CCS ‘combo’ plug delivers an 80 per cent charge. The MyPeugeot app allows remote access to pre-set charging times, heating and air conditioning and check its current charge level. Peugeot Ireland expects 10 per cent of 2008 sales to be EV. The e-2008 goes in to production for April deliveries. 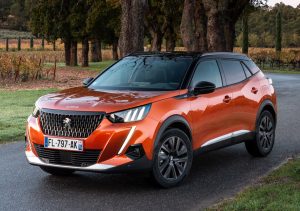 The petrol 1.2 litre 3 cylinder Puretech engine comes in a range of power outputs: a six speed manual 100hp/205nm, a 130hp/230nm (man/auto) and range topping 155hp/240nm EAT8 automatic. The 155hp automatic (EAT8) is quick with 0-100km/h taking 8.2 seconds, top speed is 208km/h. we we less impressed by the big 18 inch alloys on our GT Line model that only delivered a smooth ride on good roads. The three cylinder Puretech motor is a little noisy when revved but is eager and fun. The 130hp version is almost as good. 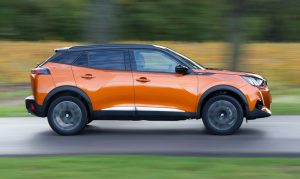 Blue HDi diesel power works very well in 2008. The four cylinder 1.5 litre engine comes in two outputs. A 100hp/250nm is near spot on. It is quiet and powerful enough for 2008’s size. If you want to treat yourself on the commute the more powerful 130hp/300nm automatic EAT8 is just the job. Riding on 17s it felt refined while also looking the part. Three drive modes; eco, normal and sport deliver the usual affect on steering and throttle response. 0-100km/h takes 9.3 seconds and top speed is 195km/h. 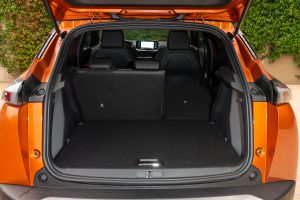 The grade structure is: Active, Allure, GT Line and GT. The latest crop of safety systems are available up to level 2 autonomous driving that worked well for us on the dual carriageways near Marseille. Lane positioning assist, lane departure warning, adaptive cruise control with stop & go (EAT8 only), full park assist, automatic emergency brake assist etc. Can be specified. Peugeot’s electronic faux all wheel drive ‘grip control’ is available as a cost option (France €400). Three new exterior colours join the range: Elixir Red, Vertigo Blue and Fusion Orange.
At present the 2008 represents a healthy 5.7 per cent of all B SUV sales. The 2008 is in 7th place YTD behind the likes of class leading Hyundai Kona and the Dacia Duster, and there are a further 17 competitors behind it! 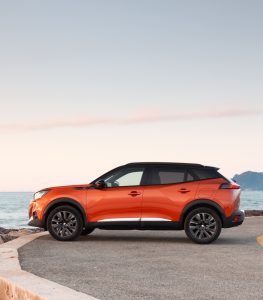 The new Peugeot 2008 arrives in Ireland early next year and should do very well in a sector that is maturing and offering more than just entry point SUV/Crossover driving.