Trending
You are at:Home»Reviews»Peugeot 5008 Review
By Michael Sheridan on 23/02/2017 Reviews 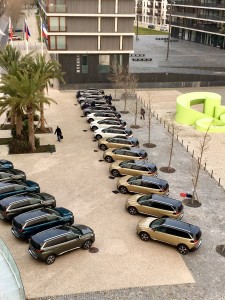 One in four new cars sold in Europe is an SUV so Peugeot has high hopes for its all new 5008.
Essentially 5008 is a 7 seat version of the latest and quite excellent 3008. Gone is the mid sized MPV styling of the original 5008 and in its place is a bang on trend chunky SUV crossover design that new car buyers can’t get enough of.
Peugeot’s ’00’ cars are named as such to signify a niche model in the range. 5008 will sell in relatively small numbers next to 3008 and the big selling 2008 – in fact the 208 based 2008 is Peugeot Ireland’s best selling car. As deserving of merit as 2008 is, the new 3008 is an even bigger step forward for the French brand as it continues its quest for acceptance as a premium car maker… so no pressure on 5008 then! 5008 will only be available in Ireland as a seven seater with either petrol or diesel power. The Rennes built car is 190mm longer than the 3008 and sits in the C segment SUV category – as a rule of thumb must be no longer than 4.7 metres, so in reality the last two seats in 5008 are cosy, and designed for occasional use making it a 5+2.

Due in July, one month into the 172 new car registration period, 5008 is going to have to take on some impressive machines. The Skoda Kodiaq and Nissan’s X-Trail are two similar machines with seven seat options and strong competitive price points. So what has Peugeot got that the others don’t? A rich vein of history is a given with the PSA brand but Skoda can boast that too – especially when you exclude the communist years. What Nissan lacks in heritage in this part of the world the Japanese firm makes up for with its service to Ireland’s motorists. Nissan built a reputation for delivering value for money that began way back with Datsun. Value for money is a priority with Irish buyers and while it would be great to be styling led when you need a seven seater the figures have to add up. 5008 despite all its impressive styling will have to be priced well. We have not been told Ireland pricing yet but expect it to be within circa €2,200 of a similar grade 3008 (in Europe the price walk from 3008-5008 is €1,700 in France).

Colin Sheridan, Sales and Marketing Director at Gowan Distributors Limited, Peugeot Importers in Ireland said, “Three clear objectives have been set: to pursue the brand’s move up-market, to be an international success and to become the benchmark in the seven-seater C SUV Segment, a segment that is showing real demand and a lot of potential.” 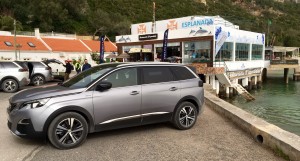 A closer look at the 5008 sees an imposing car that is actually 95kgs lighter than the MPV 5008 it replaces. An upright grille, available in two styles announces the car’s arrival while its large SUV like bonnet could almost be used as a picnic table. A large glass area leads the eye to a well disguised boxy and practical rear. 5008 sits as tall as the outgoing car on the road but is now longer at 4.64 metres (+110mm) and while the same width on the outside the interior features more width – with an additional 110mm for elbows. The third row gets an additional 21mm of headroom courtesy of the high roofline that doesn’t need to taper down – hence the near vertical tailgate. With all seven seats in place the boot space is as you’d expect, tight. Configured as a five seater the boot is huge with 952 litres of space. this rises to 1060 litres with the rear two seats removed. With all rear seats folded flat there is 2042 litres available to the roof (or 2150 litres -2 seats) making 5008 a great cargo carrier. There is a powered tailgate option too depending on specification. 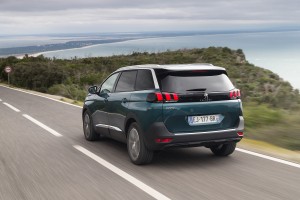 5008’s bodywork and panels nod in a superficial way to conventional off roaders but 5008 also manages to look street smart and urban friendly with some elegant touches like the signature lions claw rear taillights. The five door machine’s exterior is more robust and 4X4-like than 3008’s – even though neither car has a 4X4 all wheel drive system. What they do have however, if you specify it, feature a very impressive front wheel drive set up that uses a host of electronics to give virtual 4X4 like ability. Advanced Grip Control and HADC Hill Assist Decent Control are phenomenal driving aids. I’ve driven in extremes of weather and surfaces in the 3008 with identical systems and survived without having to use any advanced driving skills. Using. A Liam Neeson voice I have a certain set of ‘Off Roading’ skills but even when I deliberately drove like a numpty on low grip surfaces the car sorted itself out. The car will find grip better than an Army Ranger in a Land Rover Defender and deliver the driver safely on the track they intended to travel. unlike various traction control systems that shut down the power rapidly when they detect wheelspin Grip Control allows each wheel more freedom to search out the grip and when it is found the car simply continues on its way. Of course the system is not foolproof but it is a brilliant driving aid and something every buyer should consider specifying. It’s all about the seats inside the EMP2 platform based car. There is more space for passengers too. The middle row gets three separate chairs that slide, recline and fold flat. The rear two seats are removable. With a bit of dexterity the load cover can stay. In the boot too – it took me a few goes to learn the knack but it’s explained in the manual, I’m sure. The front seat can be folded flat to make a table top and an electric seat massage function is optional. Knee room in the middle row is increased by 60mm. 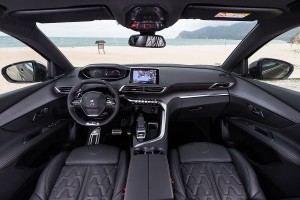 5008’s i-Cockpit and dash layout with its 8 inch touch screen is really impressive. 5008 gets a tiny steering wheel and the main dials are very well placed above the top of the rim to help keep your eyes close to the road. Really well design piano key switchgear gives a premium feeling to the cabin and both front seat occupants are cosseted by a large centre console. Behind the wheel you feel the centre of attention and it is a very comfortable place to be. Our test route brought us over some rutted and Cavan like roads south of Lisbon in Portugal and this helped us realise that while the larger 18 and 19 inch wheels really look the part Irish buyers might find the smaller 17 inch wheels more forgiving in terms of ride comfort if they intend to stray off the national road network. We tested a 1.2 litre PureTech petrol with 130hp/230nm and 120g/CO2 fitted with the EAT6 automatic gearbox. This combination works really, really well. 0-100kph takes 10.4 seconds and it is all done with little fuss. The cabin is quiet and progress is smooth with no harshness felt through the pedals or inside the car. For urban users petrol power, particularly in automatic makes a hell of a lot of sense. While 1.6 litre diesels (100hp & 120hp) will be most popular there were none to test at the launch centre but the 2 litre with 150hp/370nm and 118g/CO2 proved to be a winning combination. 0-100kph in 9.6 seconds is only slightly quicker than the 130hp but its greater pulling power, which is what we all use to drive us in day to day motoring, really suited the big machine. Our test car had a six speed manual that featured a nice short throw shift that was also precise. With its long 2840mm wheelbase (+165mm over 3008) 5008 performed predictably and with only slight understeer on twisty roads. On the motorway the ride was really smooth. A sport button, next to the gear selector, can give the illusion of a performance boost and in the automatic it works well but is a bit of a gimmick in the manual. 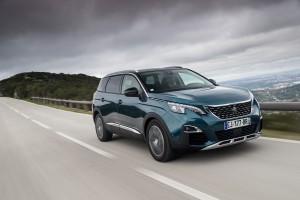 5008 is an impressive mid-sized seven seater plus when you factor in the cool party trick first seen with new 3008 of being able to carry and charge up your electric foldable Peugeot e-bike (that didn’t work when I went to test it – but will, by the time it goes into production in May) or electric assisted Peugeot e-kick scooter (that does work) in the boot – there’s a lot to love.

Prices and specifications for the new 5008 SUV for the Irish market will be announced closer to launch.