Trending
You are at:Home»Reviews»Peugeot 508 review
By Michael Sheridan on 22/07/2018 Reviews 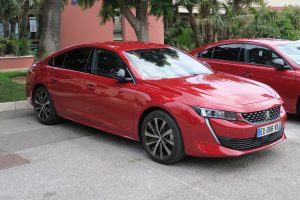 Peugeot’s new 508 executive car arrives later in the year and it is a real head turner. Unfortunately the once big selling saloon car sector is being squeezed to near death by the rise of the SUV and it is unlikely the 508 will ever dominate the sales charts.

Peugeot’s design team has in recent years delivered some very attractive SUVs like the 3008 and 5008. Look closely and there are hints of Peugeot’s stylish design language in the new 508. The 508 takes over from a modest selling mid-sized car range that stretches back from the outgoing 508 to 407 and the 406. The new machine sits on the same EMP2 platform found under the 3008 and is clearly coming out fighting. 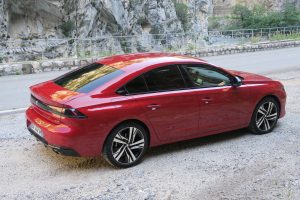 Thanks to a very handsome exterior that features shorter overhangs, a handsome front end and striking rear, the Peugeot can happily park right beside a VW Arteon, Audi A4 or BMW 3 Series with its head held high.

The new 508 has similar dimensions to the old 508, but with slight tweaking the car looks so much smarter. Highlights apart from the beautiful exterior include a totally overhauled interior. The cabin features Peugeot’s clever iCockpit and gets a big centre touch screen. All the latest tech and ADAS driving aids are available (model and trim dependent) while little touches like the wonderful piano key switches and of course the tiny steering wheel work really well in the five seater. 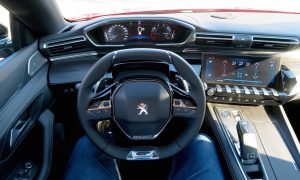 The new front wheel drive car looks like a saloon/sedan but is in fact a beautifully styled liftback (an SW estate version will be revealed at the Paris show later this year). The 508’s stance on the road is impressive and to give credit where it is due Peugeot is really getting close to delivering on it desire to be seen as a premium volume brand. Another nice touch are the window frame-less doors… very coupe-esque. The tech is impressive and with the availability of infra red night vision the 508 deliverss a first for its class. I experienced the system in a basement in Monaco (don’t ask) and it worked well. The systme can see beyond the range of the car’s lights and identify people and animals before the naked eye can. Level 2 autonomous driving is available too (adaptive cruise, lane keeping with stop start traffic follow). 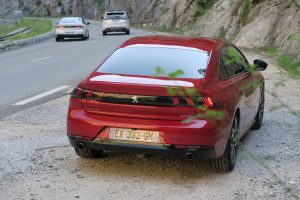 All engines are mated to an automatic EAT8 gearbox with only the entry 130hp diesel coming with a manual gearbox as standard. This entry model cruises and drives well. The auto helps deliver a premium feeling and the gear shifts are seamless in the new 8 speed. The new box takes over from the less loved six speed EAT6. Petrol and diesel engines are available and a 225hp PHEV plug in hybrid will join the range in 2019. We’re told it will have an electric only range of 50km. All engines are Euro 6d-Temp compliant with two petrol 1.6s producing 180hp/250nm and 225hp/300nm (GT) and two diesels; a 1.5 with 130hp/300nm and a 2 litre with 160hp/400nm and 180hp/400nm. On the road the 508 is a revelation. The McPherson front and multi-link rear suspension has been set up really well and the car, especially the higher output versions, is a hoot to power on in. The steering is geared for quick response and the ride is composed. On the top grade GT model active dampers star as part of the adaptive drive mode set up. Using a rocker switch the various settings adjust the ride quality to suit the selection with eco, comfort, normal, sport and manual (gearshift) available. This setup is also optional on the grade three allure model. A drive mode button in all other models lets you select how the engine is mapped and the steering wheel weighted with eco, normal and sport setting. 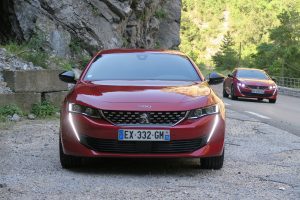 Will the 508 be bought? I hope so. Peugeot France told me that the car previewed very well with the big fleet valuation companies and it has predicted higher residuals than its main rivals. As for load carrying capacity the 508 is average but hey that is a small price to pay for such a good looker. The boot holds 467 litres and our test cars had a space saver spare wheel under the floor. Fold the rear seats down and there is 1,537 litres of space.

The new Peugeot 508 arrives later this year and proves there is still life in the executive cruiser.