Trending
You are at:Home»Reviews»Peugeot 508 SW review
By Michael Sheridan on 31/01/2020 Reviews 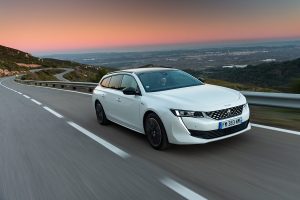 The stunning looking Peugeot 508 saloon or fastback as Peugeot calls it, turns heads and this is remarkable for a class of car that is losing out in the sales charts to the rise of SUVs. The four door’s design in is sharp and handsome – so what happens when you mess with the saloon shape to make an estate version? We’ve been putting the 508 SW through its paces. 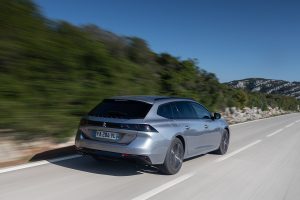 The 508 jumped out as an exciting and cool car when the latest version was launched. The stunning exterior features some stunning design elements. The 508 literally made all cars in the mid sized saloon class look dull and boring. The load carrying SW’s with its 530 litre boot has identical styling to the fastback from its nose to the B pillar. From the middle of the car rearwards the estate form takes over. The tailgate is smart and the design holds up to very close examination. The light profile, flush surfacing and architectural ‘Peugeot’ lettering ensures the car appears classy. The SW is slightly longer than the fastback but its proportions like the saloon seem spot on. The 508’s frameless windows add a touch of coupe class to the car. 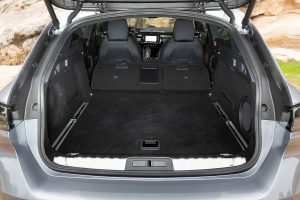 Inside the cabin is the striking layout that is so much more interesting than its conventional rivals (see our 508 review). The dash layout of 508 is simply delightful with only the sometimes flakey interface causing us some grief. I had to reset my driver profile a number of times after the car failed to store my settings overnight. The in-built navigation is pretty poor too and failed to recognise many of my voice or physically typed inputs – so thank goodness for CarPlay. The lovely piano key switchgear is great but the USB socket hidden under the centre console could be more accessible. A nice touch is the way the cable routes neatly in to a cubby next to the gear shifter to keep a phone tidied away and out of sight. 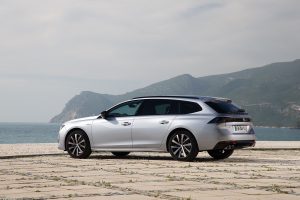 The 508 is a comfortable car with enough space for a family. The boot has a nice low floor to make loading easy. One niggle concerns the roller load cover. It is similar to many that can be popped horizontally or upwards slightly on a guide rail for ease of access. If left up or not secured it partially obscures the rearview mirror’s vision. Our test car’s load cover frequently popped open by itself. That annoyance aside there are levers in the boot to drop the rear seats and load rails on the floor for luggage accessories for added practicality. Rear headroom is better than the saloon but not as good as some rivals. 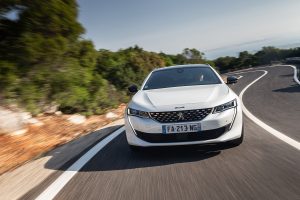 Our test car is powered by a 1.5 litre BlueHDI diesel pushing out 130hp/300nm. 0-100km/h takes just over 10 seconds with a top speed of 208km/h. Fuel consumption is claimed at3.7l/100km (NEDC) or 76mpg with emissions a low 99g/CO2. Normal, eco and sport drive modes feature but have little impact. On the road our EAT8 automatic drove well and the small steering wheel that comes with the i-Cockpit layout added a sense of sportiness to the occasion, although the 130hp car is not that dynamic. If you want driving fun the 225hp GT is yer only man. Be wary opting for large wheels as they can take away from the car’s ride comfort but when fitted look great. Automatic is the order of the day with 508 with only the entry model available with a manual gearbox. (A hybrid version of 508 has just been launched and we’ll review it soon) 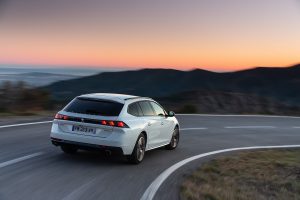