Trending
You are at:Home»Reviews»Peugeot Rifter review
By Michael Sheridan on 13/08/2018 Reviews 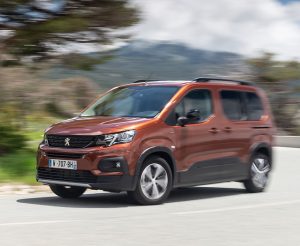 Peugeot has recorded in excess of 1.25m sales of Tepee since 1996. The current version has been around since 2008 and Peugeot wants to grow the market with plans to sell Rifter in 100 markets globally. We took to the narrow roads surrounding Monaco in the five seat version to test the car and as a bonus got to put the fear of god in to the natives in their ultra wide Lamborghinis. 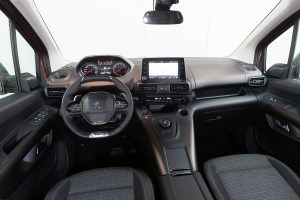 The purest form of multi purpose vehicle is the humble passenger van. On paper they make a compelling case but sadly they are always visually challenging machines. Small vans with seats and windows like the Peugeot Tepee, Citroen Berlingo, Renault Kangoo or Ford Transit Connect offer a huge amount of cargo space compared to the best car based MPVs, especially when all the seats are occupied. The interiors tend to be hard wearing and durable with lots of robust materials used, add in flexible seating and a huge cargo area and there is lots to be happy about. Drivers enjoy a commanding SUV like driving position, not to mention ample headroom, there is even roof cubby bins for your dockets… sorry I mean maps and family stuff. It is a given in the motoring design world that you cannot make this class of car pretty, but you can make people question what they truly need from a car. Peugeot with the Rifter has used its popular EMP2 car platform as its base and improved or I should say reinterpreted it. 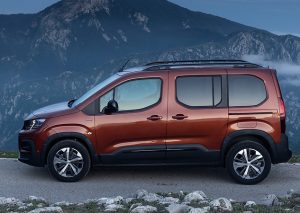 The Rifter comes with a range of small capacity engines no bigger than 1.5 litres and the platform has been modified to accommodate these units and also aid the car’s ride and handling characteristics. The Rifter is more sophisticated than the Partner that for example used just four studs holding each wheel whereas the Rifter uses five. The Rifter has its own springs and shock absorbers tuned to reflect the car’s lighter load (compared to a van) and of course the need for a more pliant comfortable ride. The car’s name is meant to evoke the great outdoors as in a geological rift. Regardless of alloy wheel size the diameter of its wheels and tyres is 690mm and this raises the Rifter a little higher off the road compared to its sister cars the Citroen Berlingo and Opel Combo – handy should nature call. 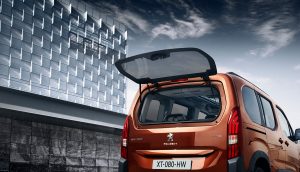 A tiny front overhang and short snout is the biggest visual change. There are new front light clusters mounted either side of a strong Peugeot grille that sets the Rifter out – especially when view head on. From the side big black plastic wheel arches dominate and are a standard feature on all grades. They hint of SUV ruggedness to what is otherwise clearly a passenger van. The rear sliding doors are wider by 60mm over Teppee and access to the middle row is good. The rear windows are conventional, so no sliding or pop out nonsense with this passenger MPV. Roof bars are standard too. At the rear new claw lights feature either side of the huge tailgate. The big lump of metal swings upwards to open and thankfully the glass section can open separately. All too often van drivers find their tailgate blocked in by a closely parked car or car park wall and this is where the open glass section comes in to its own. Peugeot’s design team is proud of the car’s overall proportions and also it’s high belt line that adds to the car’s almost Tonka toy like stance. 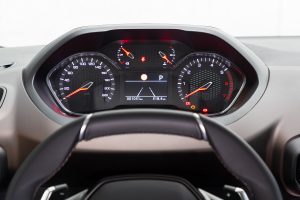 The cabin is striking as it features Peugeot’s I-Cockpit dash and steering wheel layout. The steering wheel is flattened at the top and bottom and is fun to use and the layout of the main instrument dials set above the top of the wheel high on the dashboard helps keep eyes on the road. This setup is a genuine contribution to safety. A floating 8 inch touch screen is another attention grabber and facilitates MirrorLink smart phone connectivity and TomTom sat nav etc. to function effortlessly. The passenger airbag is mounted in the roof lining and this allows a more creative use of the dash area in front. An electronic parking brake is standard as is cruise control and speed limiter. Boot capacity is, as you’d expect, vast. With five seats in place there is 775 litres of cargo space up to the load cover and if you load to the roof a whopping 1,355 litres available. Fold the middle three individual seats flat to the floor and there is 1,414 litres at load cover height or 3,000 litre to the roof. A seven seat long wheelbase Rifter will be available too. 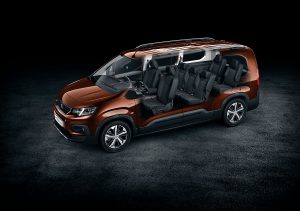 The standard car is 4403mm long but the seven seater adds 350mm. It was not available to test drive but we did have a good rummage around a static display model. The rearmost two seats can fit fully formed adults. There is head and legroom to spare plus the removable seats can slide fore and aft adding to the car’s appeal. Wheelchair users and Taxis will like this version a lot. Boot capacity with seven seats up is modest but you can stow the load cover in a slot on the floor. Without the rear two seats the boot holds 1,050 litre to the cover or 1,900 to the roof. Again in a two seat van configuration there is up to 3,500 litres of space. Note that as the passenger airbag is roof mounted you could load through to the top of the dashboard if needed. 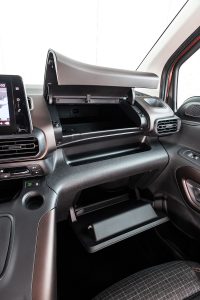 Three grades starting with a level 2 active, allure level 3 and level 4 GT Line will be offered in Ireland with Peugeot’s entry level 1 access grade not offered. The full range of safety driving aids (ADAS) that feature on the 3008 and 5008 are available with the Rifter. Off road ability comes via the optional advanced grip control system with mud and snow tyres that we know well from the 2008, 3008 and 5008. An all wheel drive version will be available in LHD markets. Depending on grade options you can also have a few luxuries like a refrigerated glove box, wireless charging, connected navigation etc. making the Rifter far less van and more modern car. 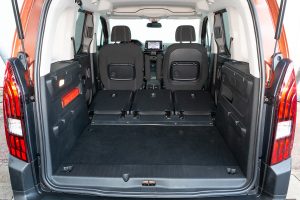 The engine range features a number of BlueHDI diesels with 75hp/230nm, 100hp/250nm or 130hp/300nm outputs, but the star is the 110hp petrol PureTech three cylinder. The engine is lively and can haul the cavernous machine along at motorway speeds with little effort. It feels more nippy than it is, pretty much like all three cylinder engines and it’s not that noisy. The 75hp is expected to follow on from the Partner Tepee as the most popular diesel but in the Rifter it lacked power and needed to be revved to get the most out of it where’s the 100hp diesel was perfectly suited to the Rifter. The Rifter is comfortable and surprisingly quiet on the open road. The suspension is softly sprung although the rear of the car can feel a little vague when cornering with enthusiasm. The blocky shape makes it easy to place on the road and the large side mirrors give a great field of rear vision. The front A pillars either side of the windscreen are very large and can obstruct forward vision but the side glass is vast and you quickly get used to looking through it at times on twisty routes. A six speed manual is standard and a new 8 speed EAT8 automatic will steering column mounted paddle shifts is available. The new auto is great and helps reduce emissions while improving driving dynamics. Peugeot sees Rifter’s customers coming from crossovers, SUVs and MPVs and of course existing Peugeot customers. The Rifter will fall under the new WLTP fuel consumption and emissions testing regime and pricing will be announced closer to launch in Q4 this year. 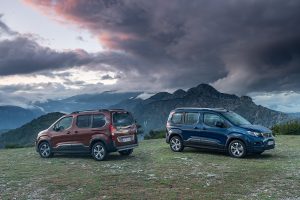 The Rifter is as honest a machine as you’ll find and one where when needs must will be a faithful friend. The Rifter is practical chunky and cheerful family motoring.