Trending
You are at:Home»Reviews»Range Rover Evoque review
By Michael Sheridan on 13/05/2019 Reviews 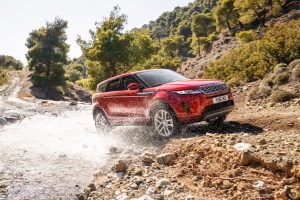 The second generation Range Rover Evoque appears to have grown in all proportions. It’s like meeting a friend who’s teenager you haven’t seen for six months where you invariably say “haven’t you got very big!” The five seat premium SUV is barely a millimeter longer than the 2010 original. Its road presence a mere design illusion but what has grown is its interior. 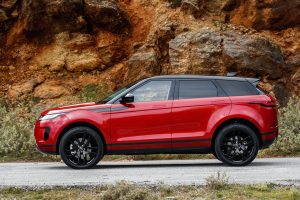 The Evoque is built on brand new underpinnings but don’t say its a baby Velar (its a baby Velar) in front of its design boss Professor Gerry McGovern as it gets to him. The Evoque slots in to the Range Rover range as a distinct model but uses the same design and styling ques that make the Velar and full fat Range Rover so appealing. In contrast to the Velar the Evoque has very short overhangs. Outside it has a wow factor that makes the new five door only SUV instantly attractive. The three door version is dropped due to a combination of poor sales and potential design headaches making it work with the new platform. 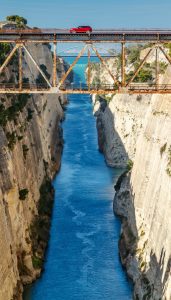 The Evoque makes a great first impression with its pop out door handles. McGovern told me these were a particularly tricky engineering challenge as they have to work in often freezing climates “like Russia” – where his wife comes from. The Evoque gets lots of new toys like a digital rear-view mirror that displays a rear facing camera’s view. This allowed the design team keep the ridiculously small tailgate window that original Evoque drivers can barely see out of. The display can also switch back to being a regular mirror if needed. The rearview is a little too good at times, I’m talking to nose pickers of Athens in particular. New ground view technology is available that delivers a camera view of the road underneath the car to the driver. A camera records the ground directly in front of the bumper and plays it back almost instantly on the cockpit display. 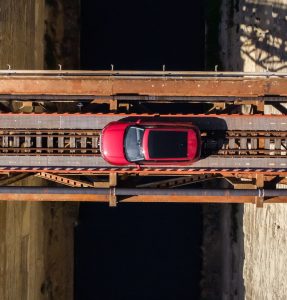 This was enjoyed as we traversed the disused Corinth iron single track railway bridge. Driving 100m above the canal we watched as our wheels straddled the tracks as if directly fed from a camera mounted directly under the engine. Depending on the grade buyers a host of driving safety aids and other gizmos are available. The Evoque can now auto park, and praise be, Apple Carplay and Android auto are available. New 4G wi-fi can deliver software updates to the car over the air while an activity key with smart settings features and a HUD head up display are available too. 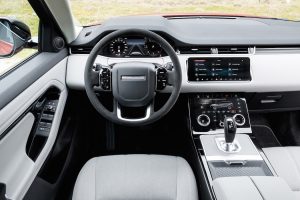 The cabin is very nice with a lack of clutter and flush screens and surfaces similar to Velar’s. Recyclables are high on the list and even eucalyptus leaves and ethical wool have been used. The stretched gap between the front and rear wheels is the key to its spaciousness. Apart from the positive driving dynamic impact the longer wheelbase delivers it means rear passengers no longer feel like they’re stuck in a cramped prison with no view. Four adults will fit comfortably, with seating for up to five in Alan Shepard’s interior design. 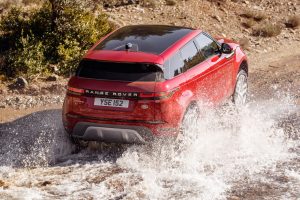 Revised Ingenium diesel and petrol engines make up the range. A D150 front wheel drive diesel with manual gearbox in the entry point, it arrives later in the year. All other engines are MHEV 48 volt mild hybrids with all wheel drive paired to a nine speed automatic gearbox. The all wheel drive system can cleverly send 100 per cent of the engine power to the front wheels under light use. On the open road or loose surfaces the Evoque can feel and act like a rear wheel drive also, which is a lot of fun. The auto’s kick down is a little sluggish but there is an S mode and paddle shifters available. A plug in three cylinder petrol hybrid PHEV is on the way in 2020. We drove the P250 petrol (250hp) R dynamic grade and D240 diesel S grade with 240hp and 500nm. The petrol was quieter, while the diesel despite having an acoustic resonator sounded a little rough under high revs. 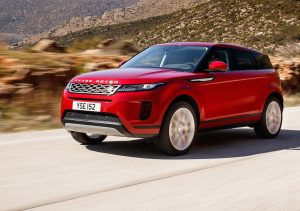 The Evoque drives like a sports saloon. With optional active suspension it corners with little body roll and its steering is direct, and, we were on the standard fit all season tyres. Our D240 S had active dampers that delivered a premium ride quality that was never harsh no matter the setting. The standard suspension on our P250 petrol felt spot on too. The car coped off the road and delivered the same cabin refinement on tarmac. Off road performance is very good but not really that high on fashion conscious buyers shopping lists. There are loads of off road driving aids that make it effortless to go almost anywhere. We drove through streams, up mountains and on loose surfaces without once mentioning a preference for a Land Rover Defender. We did pick up a puncture on a rocky stage of the Acropolis rally but it was sorted in a jiffy. 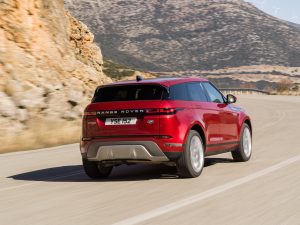 The Evoque is tricky to pigeon hole even for Range Rover as the car seems to sit in its own space in the market. Range Rover can see customers coming its way who might be coming from an Audi Q3 or Q5, BMW X2 or X3 or Volvo XC40 or XC60. After a couple of days of on and off road testing the Evoque impressed us greatly.