Trending
You are at:Home»Features»Range Rover Velar launched
By Michael Sheridan on 23/09/2020 Features, News 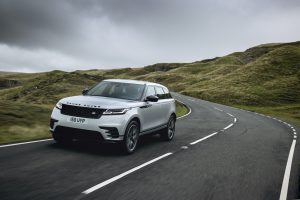 Range Rover has given the Velar a mid-life makeover to enhance its appeal and we’ve been to its online launch. 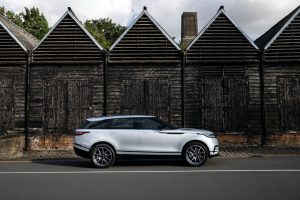 Before you worry that the retractable door handles have been messed with – relax that bit of theatre is retained so what has changed? There are new engines and this generation sees the introduction of mild hybrid power also. There is new plug in hybrid (PHEV) version that will be the one to get if you want to avoid the odd pitch fork being thrown at you for driving a big SUV in the coming years. 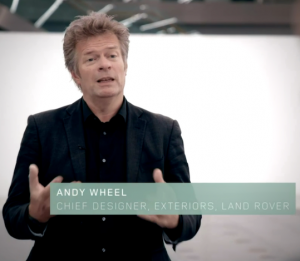 Andy Wheel, Velar’s exterior designer has overseen a de-cluttering of the original’s bodywork but he wanted to ensure the SUV looked like it was carved out of a solid piece and reflected ‘timeless modernity’. Any lines seen as excessive have been trimmed back. His design team working under the banner ‘reductionism to purify design’ made a distinct effort to simplify the exterior – even if it already was the sleekest Range Rover in the range. The front overhang is short, the roof is floating and with large wheels the car is an instant like – I think I may have said this about the original too! The lights are thinner and overall the body does look pretty good. 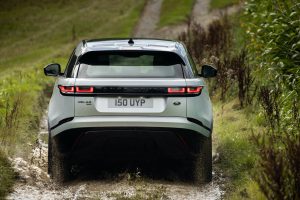 The cabin is refreshed and now features less clutter, new materials and JLR’s latest connectivity. The improved feature sharper high resolution displays feature JLR’s new Pivi and Pivi Pro technology first seen in the new Defender. Thsi has a learning function for the Sat Nav (among other features) that keeps quiet on roads you know. The driver gets a 12.3 inch digital driver display and mobile phones get a signal boost helped by an external antenna. A dual-SIM with 4G data plan is also embedded and this also allows for over the air software updates. Surround view cameras offer a 360 degree view. While leather seating is the norm for Range Rovers new Velar features a new premium textile at same level as leather. It is made from 30% wool, made in England, and produced using water – so take that environmentalists. Cabin air quality is improved via better filtration of fine particulates. There is new to Velar noise cancelling tech to add to the cabin’s premium ambiance. A new smart keyfob adjusts the car’s setting to your preference and you can also get a wrist band key. 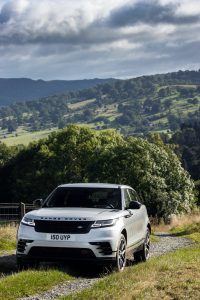 Engines feature new and revised 4 & 6 cylinder petrol and diesels that are now electrified. JLR is particularly proud of its new D300 engine. The 180 and 240 are replaces by the new D200 (204hp/430nm). Mild hybrid (MHEV) technology is across the range but the star for us is the 2 litre four cylinder 404hp PHEV plug in hybrid. It has a 640nm, a 7.1kWH battery (under the boot floor) and an onboard 7 kw charger and 32 kW DC and has an electric only driving range of over 50km – perfect for the school run using zero emissions. The PHEV can charge fully in circa 3 hours or fast charge from 0- 80% in just 30 minutes. 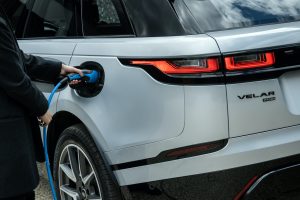 Air suspension is standard on all six-cylinder versions. Range Rover says Velar’s driving dynamics are improved and its off road ability enhanced (213mm ground clearance). Adaptive suspension will be an option. 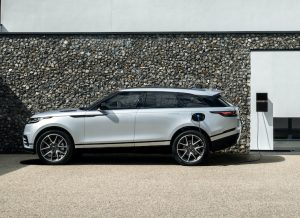 Overall, it looks like a significant upgrade. The Velar continues to look impressive and imposing and can go most places you point it. The addition of a plug in hybrid is key to its longevity. We’re looking forward to testing in the coming months.