Trending
You are at:Home»Reviews»Range Rover Velar review
By Michael Sheridan on 04/09/2017 Reviews 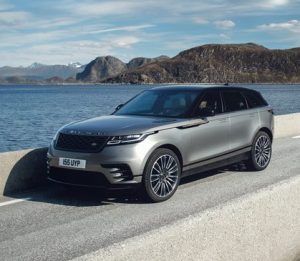 Plush and capable are words that spring to mind when thinking of the Range Rover brand. The posh arm of Land Rover has always built aspirational machines and the brand new Range Rover Velar is no different.

The Jaguar F Pace-based SUV starts from €62K and slots in between the smaller €41K+ Evoque and larger €74K+ Range Rover Sport in the line up. Instantly appealing, the Velar, named after the original Range Rover prototype, is clearly striking on the outside. 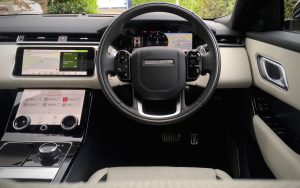 Inside the cabin is bang on trend too. The flush ‘Touch Pro Duo’ flat infotainment screens and well styled interior really impress. Even walking up to the Velar is a treat as the all wheel drive machine has a neat party trick. The pop out and retracting door handles create quite a few giggles but it is the overall styling that is arresting. The slim LED headlight clusters and smart front end catch the eye instantly, but the silhouette is pure Range Rover – so there is a lot to love. The only concern I have with instant attraction is will it last over time. 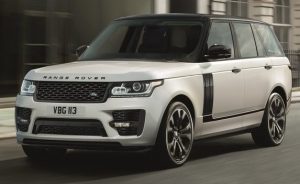 The full-fat €118,885+ Range Rover (pictured left), as I like to call it, is the king of the road or at least you feel that way when you are behind the wheel. It is too easy to call a big Range Rover a fat cat’s chariot – until you actually drive one! To really ‘get it’ you have to experience the commanding, sofa-like driving position coupled with the vehicles ability to go places where you would send a goat. The Velar is not quite as capable off road but that was never the plan. 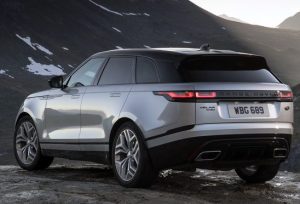 The Range Rover brand still caters for demanding owners and of course the country horsey set who need machines that can wade through streams and tow horseboxes but the TATA owned brand also caters for followers of fashion. The Evoque, the Range Rover entry point, featured a stunning exterior design when it was launched in 2011. Straight away it looks hooked fashionable and younger buyers to the brand. The hype at the time had us almost believing Posh Spice aka Victoria Beckham, who’s name was added to Gerry McGovern’s design team, had welded the thing together herself. The firm’s quiet revolution continued when the unthinkable happened – Range Rover launched a two wheel drive Evoque… Noooooooo! It was, not surprisingly a big hit with urban buyers riding on the wave of Crossovers and urban SUVs who simply wanted the look but didn’t need true off road ability. The new Velar now moves the game on again with its stunning looks combined with the credibility of AWD serious off road ability. 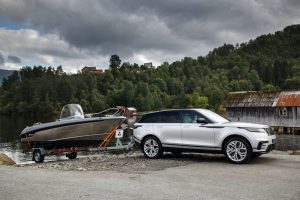 Three models are available: Velar, R Dynamic (the sporty one) and First Edition range topper. Buyers then select a grade of trim from base, S, SE and HSE – all of which add more toys. On the road my €101K highly equipped R Dynamic HSE test car featured a 240hp version of the new 4 cylinder Ingenium diesel engine coupled to an eight speed auto (with paddle shifters). On the road the ride was firm and borderline rough, which came as no surprise as I was riding on fantastic 21 inch alloys and rubber band-like tyres. Buyers expecting a magic carpet ride similar to the full fat Range Rover will be disappointed with this version. The 240hp 2 litre engine provided adequate power yet did not encourage me to drive with enthusiasm despite 0-100kph taking a swift 7.3 seconds. 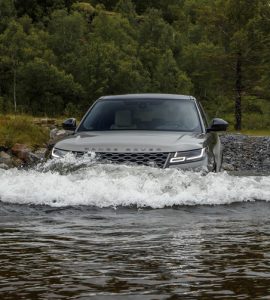 My test car’s air suspension (standard suspension is the entry point) adjusts the car’s ride height automatically and can also be manually set for: access (low), normal and off road (high). There are electronically selectable driving modes also that adjust the drive and traction for all sorts of surfaces that most city buyers will never encounter such as mud ruts and sand. Off Road the Velar has impressive credentials with good clearances compared to its mid-size SUV competition. Depending on specification and options you can get lots of tech to be proud of like a HUD or ‘All-terrain progress control’ that is a form of autonomous off road cruise control first seen in the new Land Rover Discovery.

The Velar features a lot of tech and using the Land Rover ‘Remote’ app on my phone I could, among many things, remotely start the car and set the interior climate to my liking.

The Velar is ‘reassuringly expensive’ with a cabin to match. Prices range from €62,240 to €150,630 for the petrol 380hp V6 First Edition. The premium SUV buyer has to also consider the excellent all new Volvo XC60 from €53,950, that is great outside and in. And if it is simply a handsome exterior you’re after the Jaguar F Pace starts from€43,700. 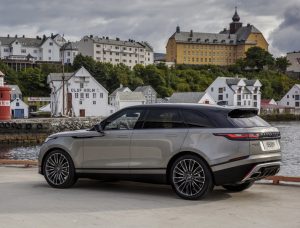 The five seat Velar will not only help to keep owners who’ve outgrown their Evoques within the Range Rover family but also pinch a few from other brands.

The striking Range Rover Velar is an instant sure fire hit.