Trending
You are at:Home»Reviews»Renault Clio review
By Michael Sheridan on 17/01/2020 Reviews 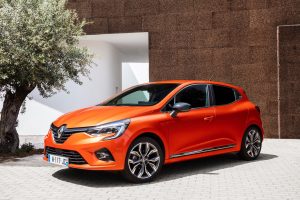 The compact supermini is under threat from a growing band of lifestyle inspired baby SUVs – but with the new Clio there remains a lot to be said for sticking with a traditional body shape.

In recent years Renault’s Clio-based Captur has been a huge hit for the French brand and shifted many a Clio buyer into the attractive crossover. Thankfully for those on a slightly tighter budget there is still space for an efficient five door hatchback. The Clio may be 30 years old but according to the sales charts it has never been more popular – it’s been Europe’s best selling Supermini since 2013 and has global sales of 15m. 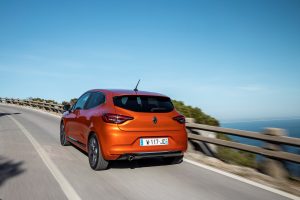 The fifth generation Clio’s sits on Renault’s CMF-B platform and is some 50kgs lighter than the outgoing model. It’s exterior overall is smartened up with a bigger grille and LED headlights coming as standard. Clio’s rear door handles are integrated and this gives a faux three-door sporty look to the exterior. New Clio is 12mm shorter than the 2016 model but wider – with a track of 1798mm (1732mm). It is lower too at 1440mm (-8mm) and to put this in context a Ford Fiesta is 1476mm. The Clio’s exterior styling is only slightly altered and has a good stance on the road. For a more sporty look a new R.S. Line grade is now available. 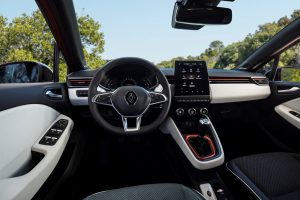 Inside you see the most progress and a clear attempt to push the Clio more upmarket. The dash layout and interior gets an overhaul as a ‘Smart Cockpit’ (option) adds a 9.3 inch multimedia screen and a 10 inch digital instrument cluster. The seats have been replaced with ones featuring a longer base and improved contouring. Knee space in the rear is also improved thanks to the seat redesign. The Cabin has 26 litres of cubby/stowage space and boot capacity is increased to an impressive 391 litres. Even the optional Bose sound system’s subwoofer doesn’t take from the boot capacity. 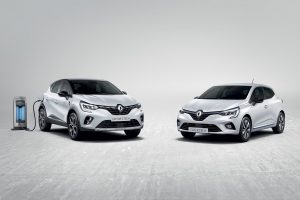 Plug in Captur and hybrid Clio

Petrol and Diesel engines are available with petrol power the expected big seller. A 1 litre three cylinder engine will be at the core of the range. The SCe 75 (75hp) is the entry point. Our test car featured the new 100hp version (replacing the 90hp) and this 5-speed turbocharged little engine is a gem (an X-Tronic CVT automatic version is coming). It also has a good amount of pulling power with 160nm. CO2 at 99g/km and fuel consumption are lowered next to the older engine. The range topper TCe 1.3 litre GPF petrol engine pushes out 130hp/240nm.
A Clio E-Tech hybrid, the first hybrid for the model, with join the range in the coming months using a combination of a 1.6 litre petrol engine and electric motor and rechargeable battery pack. The E-Tech Clio is part of Renault’s offensive to have 12 electrified models on the market by 2022.
Diesel power comes from a very green ‘Blue dCi’ 85 with, you guessed it, 85hp and 220nm of torque (6-speed manual).

On the road the Clio is fun to drive. Our 100hp test car is lively and once you don’t touch the ‘Eco’ mode button you will find nipping about in the front wheel drive car entertaining. The Clio’s steering is geared for an instant response and this makes cornering feel sporty – the steering wheel is smaller too as is the car’s turning circle at 10.5 metres. The Clio has quite a long wheelbase and this reasonably large gap between the front and rear wheels aids cabin comfort by softening out road imperfections, particularly at speed. Our test car had lane keeping assist and a host of driving aids are available. 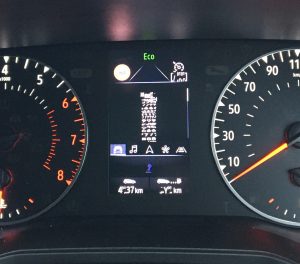 Our test car had a couple of minor electrical issues. The electronic digital display between the rev counter and speedometer was glitchy and on some occasions the large centre display would shut down entirely and randomly reboot. There is some good news in terms of crash ratings as the new Clio has performed very well at EuroNCAPwith a best in class score In terms of safety. 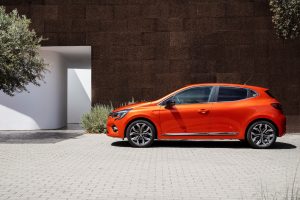