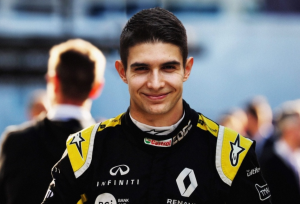 23 year old Frenchman Esteban Ocon missed last season but with a sixth place finish at Silverstone last weekend he is full of energy and looking forward to the rest of the season.
The rising star sees the chance to racer back to back at Silverstone as a great opportunity to get more points although he told us it is odd to do it without any fans present – although he says he sees the love of the sport through social media. Ocon says the Renault team has made positive progress since Budapest and to take part in this weekend’s ’70th Anniversary Grand Prix’ at Silverstone is very important as even he can see how much the sport has evolved over time. The top three teams are out of reach (Mercedes/Ferrari/Red Bull) but he says it is the long term plan to get Renault back up there. Will the expected hot weather effect this weekend’s race? Yes the weather is going to get hot and he’d prefer colder weather. In late October there will be a race in Portugal – would this cause any issues? Esteban said it should be okay even that late in the year. We were curious about his favourite F1 car growing up? His hero car would have to be be ‘the R26 championship winning car that Fernando drove – it was a time when cars had everything including 20,000rpm rev limits and traction control among other aids and telematics’. When we asked if he have a favourite driver from the past that he could choose as a mentor he said he already had him – Alain Prost. The former World Champion and fellow Frenchman will be on hand in person at Silverstone this weekend and in general is always on the end of the phone to him whenever needed. 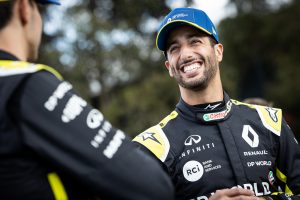 Next to join us was the senior member of the team. The beaming smile of 31 year old Daniel Ricciardo could be seen through his mask even before he took it off (we were socially distanced obviously as were the crew). He was very happy with securing fourth place last week and was happy that that weekend went well with a great qualifier ‘we were always in the mix’. ‘It was huge for the team to get a fourth and sixth place so the atmosphere was awesome’. He had last Monday off after the race and took a short break to London ‘I couldn’t stay in a motorhome for two weeks straight!’. When asked about the triple header races Ricciardo said ‘I love em but they are pretty taxing. After Budapest I needed time off but I love we can get a rhythm, but three in a row is the limit’. 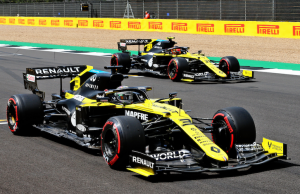 We asked about his positivity and how the drivers in general will deal with this very odd season. Social media showed some great fun being had during lockdown on the Ricciardo farm, ‘The lockdown was pretty good for me. I was on the farm and able to keep busy. I was getting a little bored but was always able to amuse myself (check out his living room parkour is hilarious). I was always like that I’ll always find a way to burn energy’. So how is the season going in general? ‘The season has changed and the tracks are different. The variety is good. Its is going to be quite taxing by the end’.
How has the lack of fans affected things – they are obviously missed? ‘The fans are missed most in the lead up to the race like the drivers parade and other events etc. You miss that energy and the butterflies they give you in your stomach. With your helmet on you don’t hear anything and you’re also in a kind of work tunnel vision – so it is the atmosphere you miss and the fans for that’. 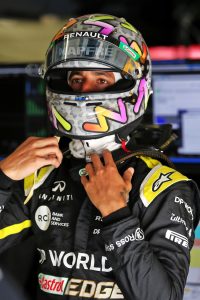 So how is the car looking for the weekend? ‘We had updates (to the car) and we’ve some more for this weekend – the midfield is tight but we are in good shape’. Catching the top three is not really on for Renault at the moment but Ricciardo says ‘Its hats off to Mercedes – they are in a league of their own – I mean we can’t be mad at them for being so good’.
In terms of general racing how has DRS been? ‘DRS for the most part has been a good thing but we can’t blame the drivers for the lack of overtakes (in races) as the current car are so quick and brake much later. DRS does make following harder and as a result you see maybe 20 overtakes as opposed to 60 in a race. Ricciardo is curious as to where the sport will go and looking forward to the 2021 F1 cars as they will be less aero-sensitive. Finally we asked what tracks are Ricciardo tracks? I like all of them but I’m looking forward to Mugelo ‘it speaks my language’. Since first going there in 2007 I have loved it there. It is fast – and flowing and just fun. The man clearly loves his racing.
Sadly in no time our time was up. Best of luck to the two boys at this weekend’s race.
Share. Twitter Facebook Google+ Pinterest LinkedIn Tumblr Email