Trending
You are at:Home»Reviews»Renault Koleos review
By Michael Sheridan on 24/11/2017 Reviews 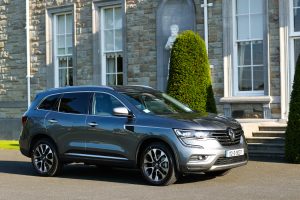 Renault’s flagship passenger car in Ireland isn’t a car but an SUV, the new Koleos. When I even type the name Koleos, I shudder! The original 2008 Koleos was quite simply a pile of poop… so clearly there’s no pressure on the new machine 😉

Sadly at present Renault doesn’t build the smart looking Espace or Talisman in right-hand drive due to predicted lack of demand in RHD markets and the resulting economies of scale. This leaves the Koelos as is the most luxurious Renault buyers can aspire to in Ireland and the UK. 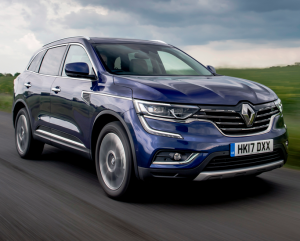 The original ’08 Koleos was essentially a rebadged Samsung SM5 co-production. This time around Renault should have thought up a new name like Kadjar XL to rid people of the bad taste in the mouth of the original. The good news is – the new Koleos looks pretty good on the outside. Exterior styling is a strong point at Renault these days. 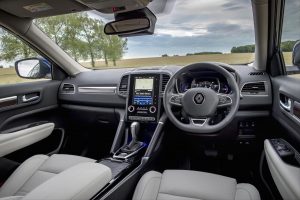 Inside, the cabin is huge and reflects the smart looking design language currently in use with the French brand. Those familiar with the Renault Kadjar will find all its bits and pieces in the interior. The Koleos could have gone to a higher level in terms of materials and trim but this chance has been missed. The Koleos drives quite well and is set up for smooth comfortable cruising. The downside to driving it is noise, its just too noisy in the cabin under acceleration. There needs to be a lot more sound insulation, particularly in the firewall. On this point alone it fails to deliver the promised flagship premium driving experience. 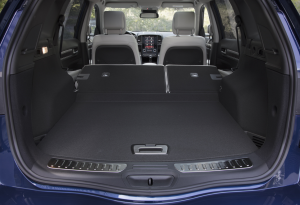 The Koleos in Ireland is a five seater and it shares its underpinnings with alliance partner Nissan in a number of vehicles (using the CMF-CD platform). The closest vehicle in size to the Koleos is the Nissan X-Trail. The Japanese car is available in 5 and 7 seat guise – so why is the Renault only a five seater? Primarily Renault doesn’t want to cannibalise sales from the Grand Scenic 7 seat MPV. The Koleos for Ireland we’re told is pitched at those looking for a large car with plenty of extras thrown in as standard. With only five seats it means the Koleos has an impressive, large cabin with loads of space. With four fat cats in the car they will certainly have no complaints about roominess (by the way the middle seat is tiny). The seating is very comfortable too. The boot is huge too with 579 litres (with another 107 litres under the boot floor). With the rear seats down there’s up to 1,690 litres of cargo space. 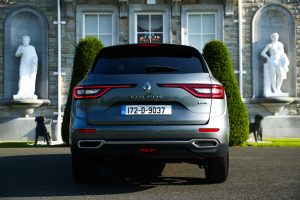 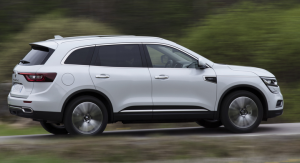 My 175hp AWD test car’s CVT automatic box made the act of driving nice and simple. The diesel engine produces adequate power. When you are on the move and driving in an easy manner the Koleos works really well, but those occasions when a dab of power was needed the engine drew attention to itself – something a premium offering should never do. Okay, I’m being a bit hard on Renault. Any model at the top of a mainstream manufacturer’s range is going to have a hard time proving its more than the sum of its parts – just look at Vignale from Ford. So I should pose the question why doesn’t Renault create its own luxury brand to allow it be more upwardly mobile – it worked for Toyota when it created Lexus and Nissan when it made Infiniti. 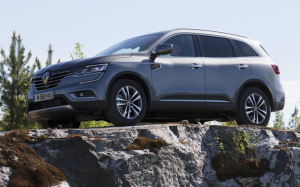 The Koleos faces stiff competition from the X-Trail and new Peugeot 5008 but more so from the Skoda Kodiaq – that is the daddy of the sector at the moment in terms of value for money.