Trending
You are at:Home»Reviews»Renault Zoe Z.E. R90 review
By Michael Sheridan on 16/06/2019 Reviews 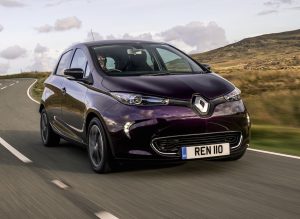 Renault has just revealed a new 52kWh Zoe with a bigger 100KW motor. We’ve seen it in Paris at a special reveal for the press and it is very impressive. The next generation Zoe gets minor exterior tweaks to its bumpers and charge port and is also greatly improved inside. It has a new plug that houses a fast charging DC connector. It also gets lots of ADAS features – even LED headlights and tail lights lights will be standard. The new R135 Zoe launches in Europe in the autumn and in Ireland in time for 121 registration. In the mean time the existing Zoe (pictured) is still worth a closer look. Zoe recently brought this revised Zoe to the market in Ireland with the R90 and R110 featuring a 42kWh rechargeable lithium-ion battery pack. The Zoe R90 produces 90hp and the R110 delivers… you guessed it, 110hp.

The Zoe you can buy now:

The R stands for rapid as these Zoes  use fast chargers via their patented ‘Chameleon’ charger that adapts to the available power source. Zoe pricing starts at €24,990 and this includes the deduction of the government’s VRT relief and SEAI grant. Originally Renault quoted a 400km range (NEDC) from the larger battery but the new WLTP test figures drop that significantly to a little over 300km. The usual EV weather related factors also apply with colder winter use delivering less range at circa 200km. 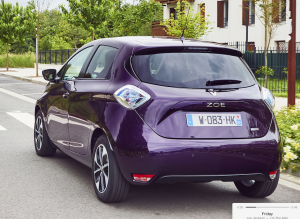 Outside the Zoe is a sort-of tall supermini but to quote Joe Jackson its “kinda cute”. Inside the five door it is bright, my test car had a light coloured trim with an abundance of hard plastic trim. Inside Zoe you sit taller than you would in a petrol powered hatchback due to the required layout for battery storage. Four will fit but there are seat belts for five. The rear seats fold and the boot can hold 338 litres, that is larger than a supermini but smaller than EV rival the Nissan Leaf. There are some cubbies but all are open to view and plastic so they’re slippery too. 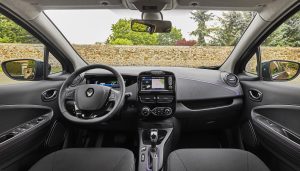 You can get brighter trim.

Like all EVs the Zoe is brisk off the line and its hushed powertrain means the cabin can be a tranquil place. The Zoe is simple to use with its traditional looking automatic gear selector and two pedal set up – there’s a manual handbrake too. The car is compact and has a small footprint on the road. Zoe’s size and narrow track encourage moderate cornering as the car’s height coupled with the tall seating position exaggerate body roll. Rough surfaces are best avoided too as the car’s suspension becomes a little upset. Driving with any enthusiasm will remind you that the car is fundamentally a four-wheeled battery platform that occupants sit on. 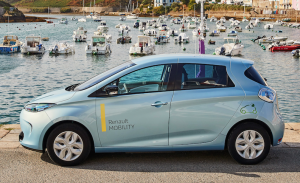 The Zoe is an urban EV and in this area it works very well. City driving is easy and the car shines in this environment. My one gripe specifically with Zoe (ignoring Renault’s annoying keycard) that goes way back to the original is its large dash and how it can reflect on the windscreen. My test car’s black dash top refelected less on the windscreen than the grey dash I recall from years ago. It is a niggle now and not a deal breaker but If I’m looking out the windscreen I want to see just what is ahead. 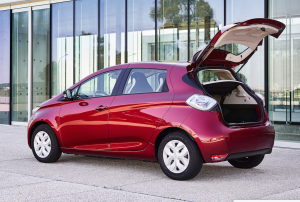 The larger battery takes longer to charge fully and this is something people tend to overlook. Its no fun to come out in the morning expecting a fully charged car to find its still cooking. It takes up to 15 hours 30 minutes for a full charge on a domestic EV charging socket (3.6 kW). The upside with the bigger battery is the 40’s longer range means the Zoe can be a good commuter. The electric version of a petrol car’s splash and dash is a 30 minute charge to get an 85km range at a 22kWh charger. Zero to 80% charge on a domestic charger takes 12 hours but far less time is needed at a rapid 43kW charger – at 1 hour 38 minutes.

The Zoe is priced relatively well. the three grades are: Expression Nav, Dynamic Nav (€27,790) and Signature Nav (€30,290). You’d never guess it but navigation is standard. The retail price is still a lot to shell out for a very average small car. Fuel savings have to be calculated in to the cost of ownership debate and then the car starts making more sense. 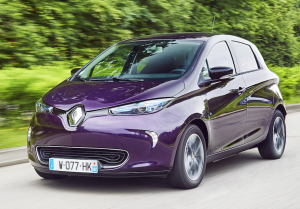 Zoe comes with a heat pump, an EV essential, that helps owners stay out of their overcoats as traditionally heating an EV uses a lot of electricity. Cars with engines heat up their engine coolant and it can be sent through a radiator just like at home to heat the cabin – that’s why it takes few minutes to get the heat going on a cold morning BUT an electric vehicle’s motor doesn’t produce enough heat and has to generate it from somewhere. Renault’s R-Link multimedia system remains a little quirky and sadly having to pair an iPhone by Bluetooth seems so last decade. Non adaptive cruise control and speed limiter are standard but otherwise the Zoe is a little light on ADAS systems. The next generation Zoe will get the latest crop of electronic driving safety aids. My Expression test car with metallic paint had a retail price after grants etc. of €25,630. Thankfully the nonsense of battery renting for private buyers is a thing of the past with Renault Ireland so if you buy a Zoe you will own all of the Zoe. 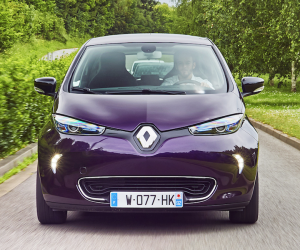 The arguments against EVs are many 1. They are way too expensive – even with state subsidies! And why is our CO2 based motor tax charged on EVs at €120 when they produce no point of use emissions! 2. An EV can’t go far enough compared to a regular ‘engined’ car and if you can’t find a charger you’re stuck! 3. EVs may be green to use but not when being produced in the first place. With every new EV these arguments are weakened.

The Renault Zoe is the cheapest EV car you can buy in Ireland (as I write). The urban EV now has a range that will ease anxiety for most buyers and make it a useful toy – and thankfully now like all good toys the batteries are included!

The next generation R135 Zoe with its 52kWh battery and 100KW motor will be clearly better than the current model reviewed here – but the current model is what is in front of us and must be looked at seriously at that price point. There are no prices announced yet for the next Zoe.