Trending
You are at:Home»News»Renault’s New Electric Vans
By Michael Sheridan on 17/07/2020 News 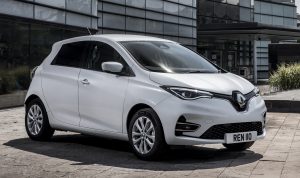 Renault over the last 10 years has a relatively long track record of producing electric vehicles. Today two new electric vans are being announced that deliver zero emissions at the point of use – the large Master Z.E. van and compact car based ZOE van.

New ZOE Business R110 is based on the new version of the best selling EV car. Two well equipped trim levels feature called Business and Business+ go on sale later this year. Air conditioning, cruise control/limiter, auto headlights are among its standard features as is Apple CarPlay and Android Auto. Business+ gets more assistance systems and goodies like climate control, traffic sign recognition, lane departure warning and lane keeping assist, sat nav and auto high-beam to name a few. The new van’s 52kWh battery is larger than the 40kWh version replaces and come with a 110hp electric motor – hence the name R110. Pulling power is good at 225nm. 0-100km/h takes 11.4 seconds but the van is particularly nippy at lower speeds where its acceleration is impressive e.g. 0-15km/h takes 3.9 seconds. Top speed is 135km/h.

ZOE’s range from a full charge depends on the weather and load. In summertime it can be as high as 395km (WLTP) while in winter is considerably lower with 150km quoted. Charging is naturally quick with any ZOE as it adaptive on board charger manages to draw a lot of power from any charger its plugged in to. Fully charging from empty at a domestic 7kW Wall-box takes 9hrs25min (or overnight) and this should be fine for most users. At a public 22kW (slow) charger three hours will deliver a full charge. A CCS ‘combo’ fast charge socket is an optional extra and one that higher mileage users who need to recharge during the day should select for their van. 0-80% charge takes 70mins at a 50kW DC charger (CCS).

The two seater vans features a bulkhead with a mesh retainer to resist cargo entering the front of the cabin. The load area is one square metre and there are four tie down hooks. the payload capacity is 387kgs. ZOE’s GVWR is 19,88kgs. The ZOE Van arrives in Ireland in November. A 5 year, 200,000km warranty is standard. The battery gets an 8 year 160,000km warranty. 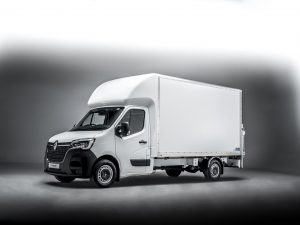 The next generation Master Z.E. has been revealed and now features a greater capacity up from 3.1t to 3.5t (gross vehicle weight) to bring it in line with its diesel sibling. Z.E.’s payload is increased by 375kgs. With 76.4hp and 225nm of torque the big van has modest but very green performance. Its target market is the last mile delivery sector.

The electric version of the big Master continues to be offered in panel van form but can also be adapted thanks to its availability in two cab/platform options. There is a new chassis cab option with Master Z.E. that allows bespoke coach building and conversions. A new ‘Luton’ body version (pictured) can be bought directly from dealers. The Panel van comes in four versions (9 – 13m3). With payloads up to 1490kgs. The Platform Cab comes in two versions with a payload of up to 1740kgs. It also has low-loader options. The Chassis Cab has a max payload of 1620kgs before conversion. Tipper, dropside and Luton box are all options.

Master Z.E.’s range has increased to 120km from its existing 33kWh battery. A full charge takes circa 6 hours at a 7kW Wall-box.
There is one grade ‘Business’ that features a good level of equipment. Master Z.E. pricing at present starts from €62,600 including VAT and net of grants. New Master Z.E. arrives in Ireland in November and pricing will be announced in August. A 5 year, 200,000km warranty is standard.

All Renault dealerships sell vans but the specialist PRO+ dealers at present are found in Dublin, Cork, Limerick, Kildare, Waterford and Westmeath. Renault leads the market in terms of offering the widest choice of EV commercial vehicles.