Trending
You are at:Home»Reviews»SEAT Leon FR review
By Michael Sheridan on 23/08/2020 Reviews 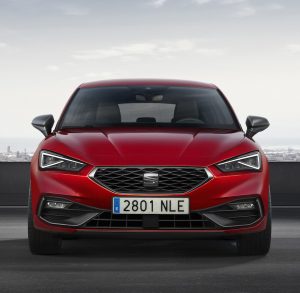 The compact car as a mode of transport is under serious threat from SUVs and crossovers but the new SEAT Leon is proof, if it were needed, that the family car is alive, well and looking great. 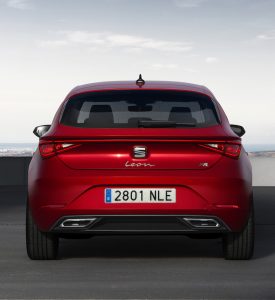 The dogs in the street know by now that SEAT makes its cars using Volkswagen Group components – so a Leon is fundamentally similar to a Volkswagen Golf and Skoda Scala etc. Exterior styling differences and the occasional delay in releasing some new technologies in favour of putting them in the Golf first are accepted norms in the relationship. The nice thing with the new generation Leon is that straight out of the box it gets loads of high tech stuff, features mild hybrid technology and this is the kicker – is better looking than the new Golf that looks quite plumpy! 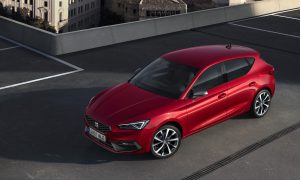 The Leon hatchback is the same height as the 8th generation Golf (1456mm) but its bodywork is slightly longer (4368mm v 4284mm) and 11mm wider at 1800mm. Boot capacity is the same at 380 litres. The Leon’s exterior is sculpted, handsome and not only that it looks premium and is right there with the Mazda3 in terms of styling. Next to Ireland’s best selling car the Toyota Corolla or the Ford Focus Leon stands out. The Leon features lots on interesting detailing and its body work looks chiselled. 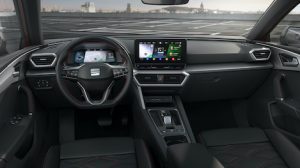 Inside Leon’s cabin the dash has been simplified and the layout is pleasing to the eye, clear and clean. As a functioning compact family car the boxes are all ticked with seating for five and a good boot. Our FR (from €28,290) features a big centre touch screen with touch sensitive sliders – very impressive on paper but less nice to use in real life. We also had a virtual cockpit – again familiar from VW Group’s Audis and more recently other brands. Our DSG auto test car features a stubby little gear knob located in the conventional place. Really SEAT missed a trick here and should have repositioned the selector to free up more centre console space, which could be more ergonomic. 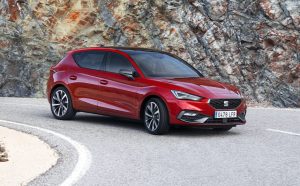 Engine choice is 1.5 litre petrol with 130hp/200nm or 150hp/250nm and a mHEV (mild hybrid) automatic version with 150hp/250nm also. Diesel power uses a 2 litre auto (DSG) with 150hp and 360nm of torque, this model produces the least CO2 and is most economical too. The petrol mHEV 48 volt system adds 45kgs over the manual car and produces slightly more CO2 also. 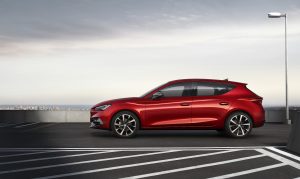 On the road the FR can behave like a number of cars thanks to selectable driving modes from comfort to sport. The 1.5 litre turbo sits some 15mm lower than the standard car and on smooth surfaces delivers quite sharp handling – rougher surfaces will be felt to a surprising degree. We had 150hp/250nm to play with and it delivers moderately sporty performance. In truth FR grade ride quality is not for everyone. Look to another grade if you live off the motorway or away from smooth city streets. 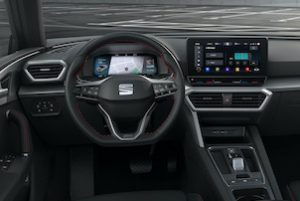 The high tech 10 inch centre touch screen in our Leon FR while impressive was also a little frustrating at times, why? Well it is part of a new generation of VW Group interfaces and to successfully transition to it from the current crop of touch screens you’ll need to be quite techy. Initially to get your head around it takes a bit of time and lots of touches. The loss of analogue buttons and switches has tidied up the dash and made it appear neat and clean but some of the basic things you might want to do with secondary controls can be a little too convoluted at times. More mature drivers and Luddites might find this off putting. Once I had everything set up I was fine for a while until I wanted to change something! 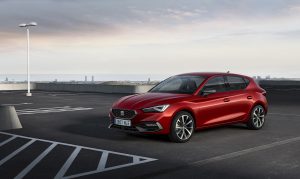 The new SEAT  Leon is a very handsome looking car that reminds us all that the compact hatchback is a car we should all consider.