Trending
You are at:Home»News»Škoda Enyaq iV launch
By Michael Sheridan on 01/09/2020 News 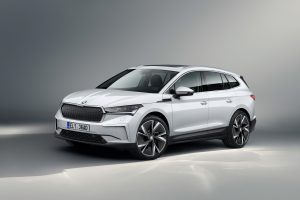 Škoda in its 125th year is celebrating with the launch of its all electric Enyaq iV SUV. The Enyaq is a significant car for the brand and arrives in Ireland next April and only 270 examples will go on sale in 2021. The Enyaq was tested and previewed to in Ireland during its development and under its skin showcases Volkswagen Group’s ‘MEB’ all electric platform that underpins the Volkswagen I.D.3. The car’s silhouette prior to the launch was already known from all the pre publicity and spy shots online. With the covers officially taken off in Prague the Škoda design details can be seen in more detail. Škoda has an excellent design and styling team and the Enyaq iV embodies lots of Škoda elements under the tag line “driven by inventiveness”. 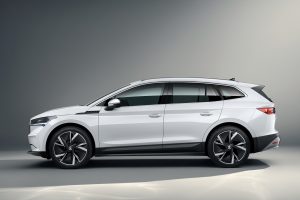 A short and wide bonnet, striking broad illuminated (optional) grille (crystal face) and an SUV-like upright tailgate are key visual aspects. More conventional looking than its sister car the VW I.D.3. the Enyaq is an instantly likeable car. Five doors and a large cabin for five occupants sees Škoda continue its remarkable track record for making big cabins. The Enyaq iV is Octavia size on the outside but Kodiaq size inside. lots of design lines will make the car very customisable. 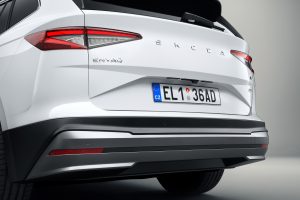 The Enyaq iV. iV by the way is the name for any Škoda with a plug, has a high degree of autonomous ability but not level 5 as yet (hands and feet off). Electrification and digitalisation are key focus areas for the Škoda brand going forward.
Some details: The Enyaq iV is available in rear wheel drive or all wheel drive. Three battery sizes will be available with varying driving ranges up to a maximum of 510km (WLTP). Motor power outputs will range from 142hp to 301hp.

Škoda Ireland Brand Director, John Donegan, said, “Despite the economic and industry challenges, we are confident of achieving our long-stated aim of achieving fourth position in the Irish market for 2020. With the arrival of the new Octavia this September we are determined to maintain this position in 2021. By the end of 2022, Škoda will have more than ten electric or partially electric iV models in our range. This portfolio of new models, together with our strong dealer network and partnership with Volkswagen Financial Services puts the Škoda brand in an ideal position to challenge for the number two position in the Irish car market.” 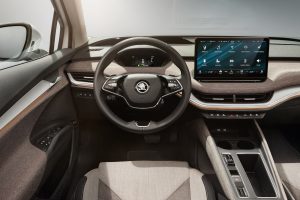 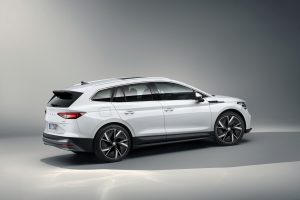 The Enyaq iV demonstrates the long road that Škoda has travelled when it first started by making bicycles. Irish pricing will be announced in the coming weeks.