Trending
You are at:Home»Reviews»Skoda Kamiq review
By Michael Sheridan on 29/09/2019 Reviews 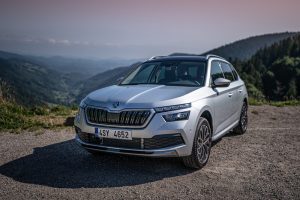 The newest member of the Skoda family is the Kamiq. The compact hatch has SUV notions but in the flesh looks more like a jacked-up hatch estate. We’ve been testing it in France at its European press launch. Featuring the longest wheelbase in its ‘City SUV’ class it could be a big car for Skoda! 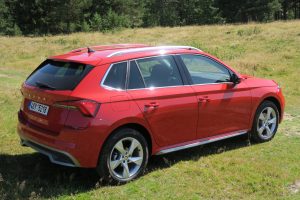 Outside the styling is smart and continues in a similar vein to the Scala hatch. Kamiq has a nice clamshell bonnet, neat lighting and some nice sculpted lines in its body work. New high mounted LED running lights help give Kamiq on street identity. When you view the five door front wheel drive car side-on, if you didn’t notice the highest in-class ride height, you could easily think it was the next generation Fabia – so crossover it is! The tailgate features nicely integrated tail lamps and can for a cost option be electronically opened to reveal a 400 litre boot. This cargo space is huge in its class and can expand to 1,395 litres with the seats down – and the front seat can be folded flat too for extra long loads. 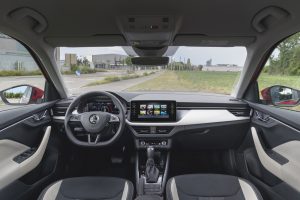 Inside the cabin you find a simple and elegant layout. Yes the materials used reflect the class but our test cars felt well built and sturdy. Like the Skoda Scala a new infotainment system with great connectivity features. The Kamiq’s dash area impresses. Our top end test cars came with large centre touch screen displays. There is seating five but the relatively narrow car is better suited to taking four. If there is one thing that VW-owned Skoda is very good at is maximising cabin space and in a class that generally offers ‘cosy’ accommodation the Kamiq excels. I was able to sit behind my driving seat with knee-room to spare and there is ample headroom too. 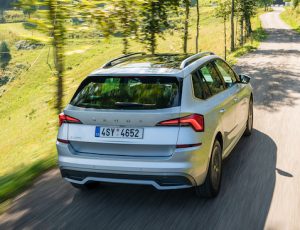 On the roads around Alsace in Eastern France we tested petrol and diesel variants. The Kamiq will sell in petrol form predominantly. The entry five-speed manual 95hp 1 litre is a near perfect fit. Despite being a three cylinder it is quick (enough) and refined too. The compact turbo charged three cylinder is lively and can handle motorway work well. The slightly more powerful 115hp DSG automatic 1 litre should prove to be the ideal town friendly version. A more powerful 150hp 1.5 petrol is also available but unlikely to sell in any great numbers in Ireland. The 1.6 litre diesel producing 115hp is refined and features plenty of torque but diesel power traditionally in the compact class has never been a big seller in Ireland. The diesel’s expected higher retail price coupled with the current demonisation of diesel will see this version only suiting high mileage users that refuse to be beaten with a stick into a thirstier petrol car. Other European markets get the option of CNG power (compressed natural gas) but this version is not being built in right hand drive. 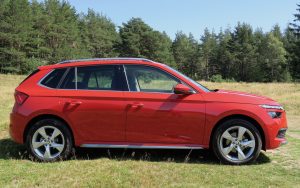 The driving experience is a pleasant one. The Kamiq feels nimble and effortless to use. This is due to it being obviously a light car but it has a light clutch too and good gear shift also. Kamiq’s steering is city-driving light and the car’s relatively narrow profile means slim city streets and evil tight carparks can hold no fear. We did stray off the official route by following the Sat Nav to the letter and the extra ground clearance proved its worth clearing a few rocks that would have pulled the sump off a lower slung Fabia. The Skoda Kamiq benefits from being built on VW’s latest small car platform and as such can accommodate the current crop of ADAS electronic driving assistance systems and aids. 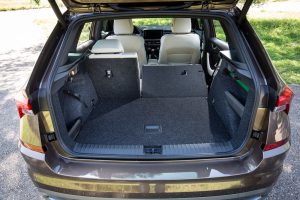 The Skoda Kamiq faces a tough fight but a fight it can do well in. The Czech built front wheel drive goes up against the class leading Hyundai Kona, Renault Captur, Dacia Duster and Peugeot 2008 to name just a few big sellers. In-house the Kamiq’s rivals are no pushovers either with the well priced SEAT Arona and Volkswagen T Cross gaining share. We expect Kamiq’s price point to be positioned in between its VW Group siblings.
Skoda continues its simply clever campaign with its ice scraper/magnifying glass in the fuel flap, optional umbrella in the door and pop-out door protectors, anti spill funnel for the windscreen washer reservoir and reversible floor mat, magnetic torch to name a few of the practical and charming features. A trip to a motor factors could get similar bits and bobs but Skoda has done this for you and this is a nice caring touch. 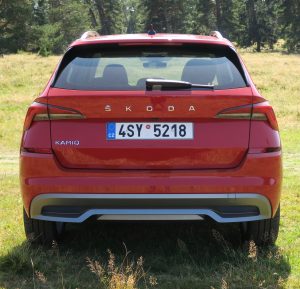 Pride of ownership is becoming a key Skoda USP as the legend of the historic car maker grows. The Skoda Kamiq is a very good effort from a brand on the rise.