Trending
You are at:Home»Reviews»Škoda Kodiaq RS review
By Michael Sheridan on 21/01/2019 Reviews 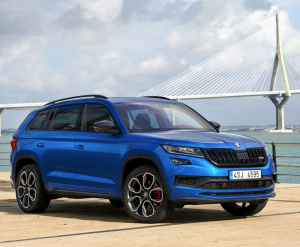 Have you heard the one about the sixty thousand euro Škoda? No, neither had I until I got behind the wheel of the new Škoda Kodiaq RS at its global launch in Spain. After years of being the butt of bad jokes for its communist period cars the Volkswagen group firm is now making cars for the rich! €62,295 to be exact is the asking price for the Czech carmaker’s twist on its large SUV. The Kodiaq is already an impressive family car and in theory there should be no need to look further than the current range topping 2 litre diesel 4X4 DSG that is circa 15 grand cheaper. Rally Sport Škodas account for one in five sales both here and in Europe, so the demand is there for a wolf in sheep clothing. 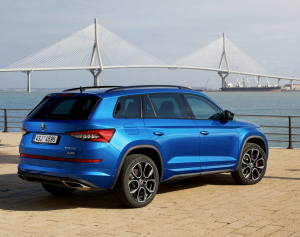 The Kodiaq RS comes with a powerful new bi-turbo diesel, four wheel drive and a smooth DSG gearbox. Škoda says demanded for diesel is still strong in this size of SUV and has no plans for a petrol only RS model. The flagship five or seven seat (+€1,000) RS gets all the latest bling and toys thrown at it but when its parked up the price tag seems ridiculous. Handsome 20 inch RS alloys and 17 inch brake discs all round signal performance, plus there are subtle body styling touches that help the ‘Skodiaq’ cuts a serious dash without being too gauche. Race blue metallic is the most striking RS colour available and the first time it has been used in a Škoda SUV. Gloss black accents sharpen the exterior’s look and bright red RS high performance brake calipers are visible through the new anthracite alloys. 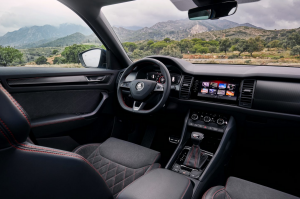 Inside the digital virtual cockpit dash display, carbon fiber trim and use of Alcantara suede with red stitching. There Virtual cockpit gets a new sports setting that brings the display choices available to five. All of the cool functionality of the standard car like the in-built umbrella cubby in the doors and the adjustable 10 colour LED ambient lighting feature. Again, you can spec up a regular Kodiaq for a lot less, keep in mind the entry Kodiaq starts in the low thirties. Beneath the skin lies the answer to the premium price. Under the hood there is a 240hp twin turbo diesel, Škoda’s most powerful diesel yet, that pushes out 500nm of torque. This impressive amount of pulling power coupled to its clever all wheel drive system that can send up to 85 per cent of its power to a single wheel if needed ensures an assured and entertaining driving experience. 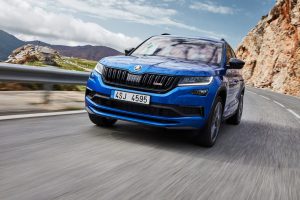 The RS features a first for Škoda; a two-stage turbocharging system. A high pressure turbo assists at the low end and a low pressure turbo aids high end performance. The sprint from 0 to 100 km/h takes 6.9 seconds (five-seater) and top speed is 221 km/h. Last June the Kodiaq RS broke the seven-seat SUV record around the Nürburgring taking just 9 minutes 29.84 seconds to lap the legendary Nordschleife circuit.
Dynamic chassis control features as standard with the RS. Eco, comfort, normal, sport (unique RS setting), snow and custom modes deliver the corresponding driving experience. An off road setting is available too, after all it is an SUV. Average fuel consumption is 6.4 l/100km and on long trips quite doable. The RS gets as standard Škoda’s fifth generation all wheel drive system. More compact and efficient the system features electronic differential locks front and rear. In milliseconds power can be sent where it’s needed with up to 85 per cent to any one wheel. The RS also gets an artificially enhanced soundtrack that is good fun. Dynamic Sound Boost uses a complex algorithm to generate an engine/exhaust note delivered inside and outside the car via an actuator located near the exhaust’s tailpipe. 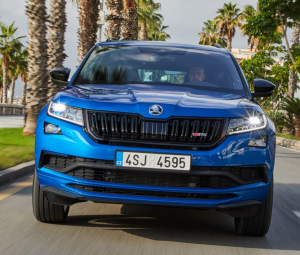 On the road the Kodiaq RS pulls strongly. The car has excellent traction and is clearly designed to eat kilometres. On a mix of roads in southern Spain and the crawling traffic in Gibraltar, the RS proved an effortless partner. Gaps in traffic could be skipped into with ease and the Kodiaq’s street presence commanded respect from other road users. On the motorway the car felt most at home. The various drive modes deliver suspension performance to suit all surfaces. Overtakes are swift and in sport mode the additional meaty soundtrack is a giggle. The note delivers a sort of dual tone sound and is never too loud, even under hard acceleration. Progressive steering is standard with the RS. Power assistance is higher at low speed and the overall hearing is tuned for the RS and well geared. Adaptive cruise control, 360 camera etc. Are all standard. 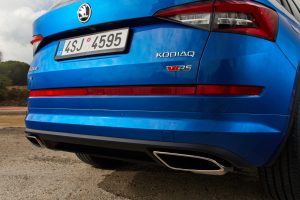 Cathal Kealey, PR manager with Škoda Ireland says “The Kodiaq RS has been an instant success since it launched in Ireland last year with demand often outstripping supply. Our customers will be delighted to hear that we will double our Kodiaq sales volume to 2,200 units next year thanks to increased production from Škoda Auto. In addition to shorter lead times, the Kodiaq has also become more affordable with personal contract plans available from 2.9% APR. We expect to sell fifty Kodiaq RS models in 2019 with five enthusiasts having already ordered in advance of prices and specifications being announced” 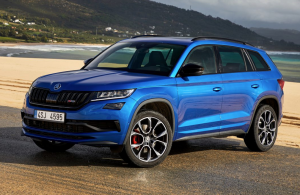 The Kodiaq RS doesn’t really have any obvious rivals and will be a rare enough sighting on Ireland’s roads. The Škoda RS brand is respected and has a deserved reputation for delivering honest performance for your buck. The new Škoda Kodiaq RS is a great cruiser more than a great sprinter. It’s relatively subtle styling and great practicality also make it very easy to live with. Comrades get your orders in.