Trending
You are at:Home»Reviews»Skoda Octavia 1.0 TSI Review
By Michael Sheridan on 08/11/2016 Reviews

Small is the new Big! with the new Skoda Octavia 1.0 TSI.

As one of Europe’s oldest car makers Skoda has a rich heritage. Sadly for car nerds very early cars never made it as far as our shores – we only got the crappy Soviet era ones that were the brunt of so many car jokes. Since Volkwagen took over the brand and launched the modern Octavia back in 1996 Skoda has become as dependable as… Volkswagen!

The latest Octavia features in its range a new 115hp, 200Nm TSI petrol engine that despite being physically tiny pushes out slightly more power than VW’s first generation’s 2 litre – while being a heck of a lot greener! We’ve been testing the new Sport version to see if it goes as well as it looks. The very first Soviet Octavia was built by AZNP from 1959-1971 at Mlada Boleslav – where Skoda remains today. You can see some great examples of Octavia in the museum located there alongside other seldom seen old Skodas. It is well worth the trip to the outskirts of Prague if you find yourself in the Czech Republic. Octavia was an odd yet cool looking machine, something you could say about all Cold War cars. Even back then Octavia had a bigger engine (1.1) than the one fitted in my test car! So why has Skoda put a 1 litre in what is arguably a substanial family car?

Weight is a killer for emissions and also for sapping power. If you can make a car lighter it needs less force to make it move – it’s a good job I’m sitting down as my brain is already taxed from trying to sound clever! Octavia’s lightweight TSI 1 litre replaces the 1.2 (110hp). The three cylinder machine is eager to rev and accelerate and in no way obviously under-powered. The turbocharged unit doesn’t actually sprint to 100kph in a remarkable time (9.9 seconds), but it feels nippy, like there is a good 1.6 litre under the bonnet. Road tax is a mere €190 as CO2 is just above the 100g. It’s a generational thing but this engine and the current wave of tiny blocks out there are forcing us to look at horsepower and torque numbers and forget any notion we had of cubic capacity being all inportant. 200Nm is a key number, as it is torque that hauls us around in our daily drives and 200 is a healthy amount. DSG automatic and manual gearboxes are available with this unit and both work well. A key addition to the revised Octavia is ‘dynamic chassis control’ that allows the driver select from various drive modes. ‘Phone Box’ wireless smart phone charging is now available as an option too. 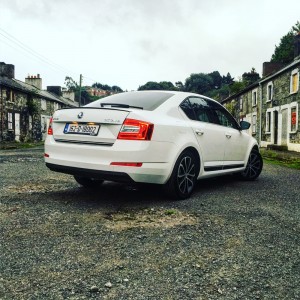 Octavia continues to be a smart looking machine that features a cabin that is  massive for its class. The boot holds up to 590 litres and the rear legroom is simply great. Inside the cabin is now quieter than I recall. The versions I drove from a few years ago were boomy but the 1 litre TSI on test was a much more hushed drive. The various specification levels and creature comforts in the Octavia range are available and bang on the money making Octavia a very easy car to like.

Does the Octavia TSI mean we’re all going to brag about how small our engines are as oppossed to how big they are? Maybe, but buyers will enjoy the clever and efficient way the car goes about its business.

Modern Octavia has been on the go for 20 years and is now better than ever. Over 40% of Skoda’s total production is made up of Octavia and it remains a seriously impressive machine. If you laugh at Skoda… the joke’s on you.