Trending
You are at:Home»Reviews»Škoda Scala review
By Michael Sheridan on 22/09/2019 Reviews 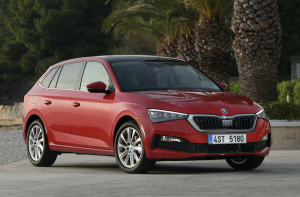 The Scala replaces the no frills Škoda Rapid. The front-wheel drive Scala has taken its modest predecessor’s understated theme and moved it on a bit. While the new market is all about SUVs and crossovers the Scala five-door sportback is a breath of fresh air. Sitting above the Fabia and below Octavia the functional the Scala can seat up to five. 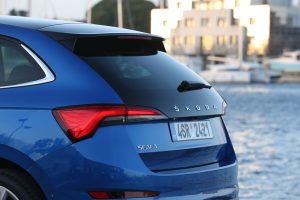 The old Rapid spaceback was a favourite of ours at Motorhub Towers. its replacement has subtle but strong body lines and creases that deliver an understated machine. The Scala fits in between the slightly smaller VW Golf and Ford Focus in terms of length, height and track (the width between the left and right wheels). As compact hatches go it has a good stance on the road. We’d go as far to say the Scala is quite handsome. The tailgate area is particularly well resolved with flush glazing and light cluster integration plus smart looking large Škoda lettering. The front end is Audi-esque and the Škoda badge on the leading edge of the bonnet looks good too. The headlight clusters look technical and depending on grade there are smart alloy choices too. LED running lights and tail lights feature as standard. 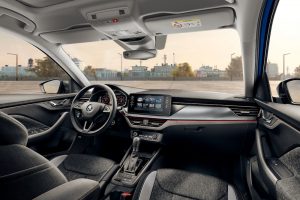 Inside the cabin is refreshingly simple – in particular the dash layout. The cabin brings out the German in me (Škoda is after all part of the Volkswagen group). The centre touch screen is well integrated and below the centre vents the climate control settings are neatly placed – although I wish there was a physical switch for the fan blower (its operated on the touch screen via the menu button). The Scala gets new USB-c connectors and also VW’s latest MIB3 infotainment interface. Elsewhere the usual VW buttons and switches abound and that’s not a bad thing with a sub brand. Cabin storage is good too. The Scala has a great sized boot at 467 litres (Golf 380L/Focus 375L). 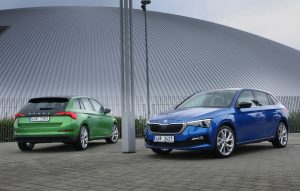 Petrol and Diesel engines are offered. A turbocharged three cylinder 1.0 litre TSI petrol starts off the range. It comes with a choice of 95hp/115nm (5-speed) or 115hp/200nm (6-speed) power outputs. The 115hp starts from €25,650 and is available in manual or with a DSG auto gearbox. A four cylinder 150hp/250nm 1.5 litre TSI is the petrol range topper (price TBC) and comes in manual or DSG. Diesel power comes from a four cylinder 1.6 litre TDI with 115hp/250nm. A 6-speed manual is standard with a 7-speed DSG optional. Diesel pricing starts from €28,475. The grades are: Active (from late 2019), Ambition and Style. 16 inch alloys are the entry point with 17s and 18s also featuring. As you’d expect a number of optional value for money packs feature. The ‘Emotion’ pack looks interesting with LED headlights and panoramic sunroof for €1,566. Leather/‘suedia’ upholstery is available too, as is a virtual cockpit display. 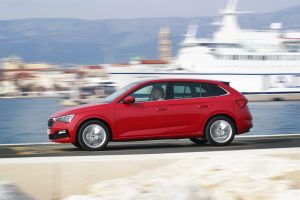 On the road the 1 litre with 115hp is a great combination. It is lively and if I may quote Goldfinger feels “Tight”. It drives well in an urban environment. The Scala on twisty dynamic roads delivers less assured dynamic performance if you’re driving with gusto. The Scala has conventional MacPherson suspension up front but lacks competitor’s relatively trick rear suspension with its compound link crank-axel with separate springs and shock absorber mountings. The suspension is perfectly adequate day to day for the power on tap. 0-100k/h takes just under ten seconds – but feels brisker than that. I would like the Scala’s steering to have quicker gearing for a faster response and this would help make the drive experience a bit more ‘entertaining’.

The Rapid was a budget car that made Golfs and the rest look overpriced. The new Škoda Scala is a step forward but worryingly the price has stepped up too. Pricing in Ireland starts from €23,650. My 1 litre manual ‘Style’ test car weighed in at €26,267. 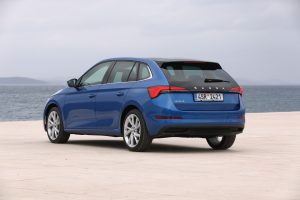 The Škoda Scala’s charm is in its quiet nature. It looks as smart as another other hatch and inside a new splash of colour adds to the functional and understated interior. The Scala is wonderfully honest and a pretty good effort.