Trending
You are at:Home»Reviews»Subaru Forester eBoxer review
By Michael Sheridan on 26/02/2020 Reviews 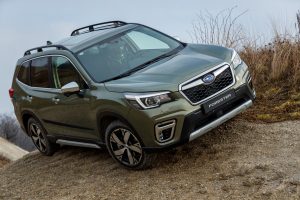 Japanese car maker Subaru has an impressive reputation for building all wheel drive cars and its own boxer engines (flat-four cylinder). Never a volume seller in Ireland the firm has built a small but loyal fan base, built on its rally proven Impreza and later with the Forester SUV. Famed for its symmetrical all wheel drive, the five door SUV really is a very capable car. Now the fifth generation of the off roader grows a little in size, gets some new technology and a hybrid power train as Subaru begins its electrification journey. 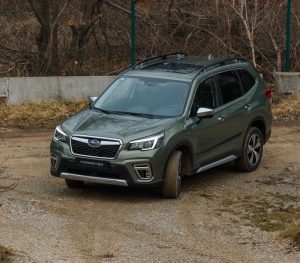 Classic SUV styling with acres of glass make the Forester utterly unremarkable to look at but those who know their Subarus know this is not a bad thing. The car is wider (+20mm) then the 4th gen. and features a longer wheelbase (+33mm) that frees up more interior space – especially in the rear. Wide opening full-length doors ensure no one gets mucky getting in or out of the car. Rough terrain is easily traversed thanks to its 220mm ground clearance. ‘X-Mode 2’ is the name for the Forester’s electronically controlled off road driving modes that take the pressure off the driver when traction has to be found. The Forester has a very good towing capacity too at 1.8 tonnes. 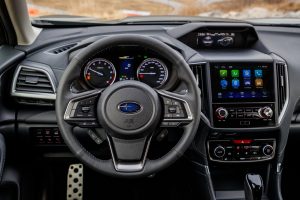 The cabin is freshened up. Up front the dash layout is functional and layered with rugged materials used. Our test car featured two tone leather seating (4 were heated) and featured a host of safety aids alongside Subaru’s excellent ‘eye-sight’ system as standard. facial recognition features for the first time in  Subaru. With the press of a few buttons my car noted where I liked my seat to be set and also where I held my head. As part of the new driver monitoring system the car has a facial recognition camera in the dash that looks at the driver’s head position and can monitor whether a driver takes their eyes off the road for more than a few seconds and raise an alert. Yes!! my test car was looking at me the whole time I drove (not a pretty sight). The warnings get more intrusive the more you are distracted. If another driver sits in, the car will adjust a host of settings to their saved preferences. 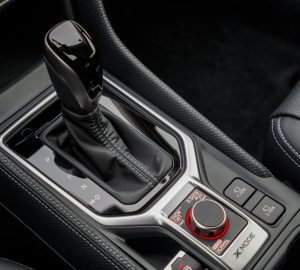 The eBoxer allows petrol engine only driving, electric only driving (up to 1.6km at up to 40km/h) and motor assist driving (or hybrid). Sadly the fuel tank like the battery capacity is tiny and this means a sub 500km range to a full tank of petrol – I’ve gone further in a Tesla with a full battery. The Forester’s default traction setting is normal but you can select from a couple of terrain modes should you find the going ‘interesting’. The eBoxer uses a combination of a direct injection 2 litre petrol engine combined with an electric motor mounted near the car’s centre of gravity. The motor gets its power from a rechargeable battery pack that is mounted over the rear axle. 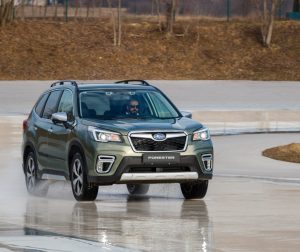 On the road the Forester offers a good view all round and the drive is comfortable and predictable. The eBoxer delivers smooth power in way that is almost dull and during our test the nation’s speed limits were not exceeded. There is an ‘Si’ drive mode that livens things up a little but I seldom used it. The Forester has never been a car you want to thrash. It is a very sensible car for sensible people. 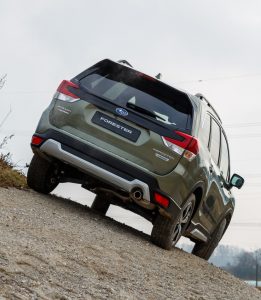 The Subaru Forester eBoxer is a nice under the radar car that really is an SUV the only downside is it could be less thirsty and would benefit enormously from a bigger fuel tank.