Trending
You are at:Home»Reviews»Suzuki Ignis review
By Michael Sheridan on 26/01/2017 Reviews 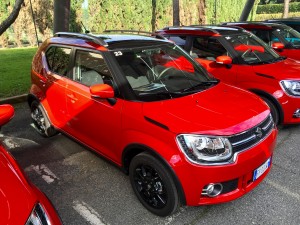 At the Suzuki Ignis launch the Japanese firm told us – in the coming years only the SUV sector of the new car market in Europe is going to grow!

By 2020 all other car types will experience a decline in market share. Projected figures suggest that compact A and B segment SUV/Crossovers will see an increase of 127 per cent to 1,664,329 units, while larger C and D machines will rise by 26 per cent to 3,047,308 out of an expected total European new car market just shy of 14.9m. This great news for the specialist small carmaker Suzuki as it hopes to build on the relative success of its new Vitara SUV with its second generation Ignis sub compact SUV.

Ignis was first launched at the turn of the century when Qashqai was but a twinkle in Nissan’s eye. Ignis was one of the first crossovers. Despite its name deriving from the Latin for fire, Ignis failed to catch on in Ireland. It would be a few years before we’d get hooked on the whole crossover thing and Ignis fell off the price list in 2008. Ignis with its faux SUV styling was ahead of its time but sadly dull to look at – I’m sure like me you can barley visualise it. The second generation Ignis is a much more impressive machine especially as we’ve all bought into the crossover SUV thing. After a gap of almost 10 years new Igins is set to fire the imagination. 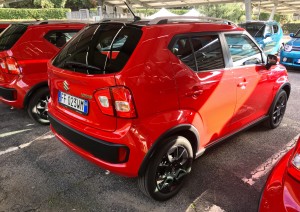 At just 3.7 metres long the Ignis is tiny. The Japanese built five door is very light too weighing just 810kg. Designer Ozasa-san says his design concept is Simple and Iconic, now I think that statement is less cocky and more lost in translation, but Ignis has lost of historic Suzuki influences in it and the attention to detail on the city car is impressive. Ignis is a global car for Suzuki, has a big personality.

Ignis slots in the Japanese firm’s range above the €10,995 Celerio in the city car class and just below the €13,995 Swift supermini. Ignis is only the second car built using Suzuki’s new small car architecture joining the much larger Baleno that starts at €17,995.

Suzuki’s heritage machines influenced styling. While none of these cars have any European significance, it shows a lot of thought went into the design. The A and B pillars are painted black to help make the roof appear to float. Bulging wheel arches, a bonnet that mimics the larger Vitara’s, body creases on the C pillar that hint of the cooling slots from the rear engined 70’s Suzuki SC 100 Whizzkid, and unique lights front and rear make Ignis really stand out from the crowd. Ignis has a sophistication that is rare in a car its size. Very quickly you find yourself rooting for it, much as you would for a Fiat 500 or Mini. 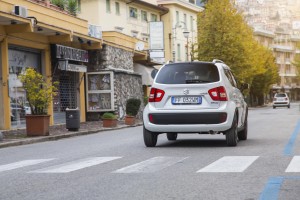 Ignis can back up its SUV looks with good off road ability. Ignis has 180mm of ground clearance so kerbs are not a problem. It also has short overhangs that deliver a 22 degree approach angle and a 38.8 degree departure angle that any serious off roader would be glad of. It comes in front wheel drive but there is a 4X4 version. The range topping SHVS-SV5 model features AllGrip Auto, a four wheel drive on demand system. We tackled a steep mud and grass bank with ease in an AllGrip model and also made a good fist of a steep rutted mud road in a front wheel drive only version too.

The entry model SV3 features 15 inch steel wheels with trims and a three seat rear bench, but all other versions are have just four seats. Our cars were shod with cool 16 inch black alloys and had optional €750 dual tone metallic paint with contrasting black roof.

Ignis doesn’t have any direct rivals with the possible exception of Fiat’s Panda 4X4. Suzuki says it expects mainly conquest buyers who like odd machines like the 500 and perhaps the Opel Adam. 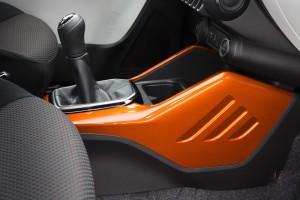 Ignis may have a compact city car footprint but it has ample cabin space. Despite the extensive use of hard plastics the cabin is stylish. Suzuki has managed to make budget materials look great. Nice colour coded door grab handles, cool rotary and rocker switches for the secondary controls and a floating 7 inch touch screen showed that a good deal of thought had been used. Three trim grades are available. SZT – the mid grade is the expected best seller while SZ5 tops the range. Connectivity is good and Apple CarPlay and Android Auto are available. 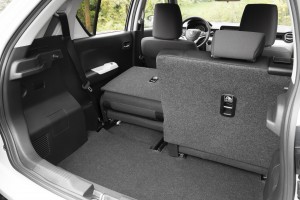 Ignis is a flexible load carrier with folding rear seat backs. The rear seats on SVT and SV5 are split and individually slide to allow a bigger boot or more legroom. The driving position is good and commanding. Even with two adults up front there is ample shoulder room. The seats are reasonably comfortable, although my shoulders were wider than the seat back.

Ignis is relatively tall at 1,595mm. The interior is SUV like with occupants seated upright adding to the sense of roominess. Its rear doors open very wide for easy access.

I was able to sit in the back behind my seat with room to spare. Headroom is excellent in the back despite the seat hip point being higher than the front seats.

There is a choice of powertrains, petrol or petrol hybrid. At its heart is a 1.2 Dualjet four cylinder engine. This unit pushes out 90hp and delivers 120nm of torque. Ignis SHVS SV5 features a lightweight mild hybrid system that adds a modest electric motor power to boost performance and reduce emissions. Suzuki doesn’t bother listing the extra power and quotes the same hp and nm figures for both powertrains. The system takes care of itself with no input from the driver. The excellent 1 litre BoosterJet three cylinder engine from the Baleno was not considered for Ignis. It was seen as too powerful for an A segment car… shame.

We tested both engines. The standard petrol machine won our hearts, as it was eager and free revving. Surprisingly it sounds like a three cylinder unit when accelerating with gusto. The hybrid version simply felt dull to drive. Both test cars had five speed manual gearboxes that worked well and an automated manual is available for a €1,500 premium. 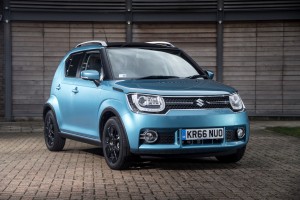 On the road, Ignis rides well on good surfaces. At 120kph on the motorway you don’t have to raise your voice to be heard above the wind noise. The suspension can be a bit crashy on rough surfaces when you are clearly reminded that Ignis is a budget city car. It doesn’t like to take corners in a hurry and understeers. Riding on skinny 175 section tyres explains a lot as there is only a small amount of rubber contacting the road surface. You get used to this and automatically factor it in to your driving style. The result is reasonable for its size. Our pre production test cars had spongy brakes that needed a firm foot to be effective. The steering, which is light and easy to use, is adjustable for tilt and not reach. It is numb and lacks feedback but it does deliver a tight turning circle of just 4.7 metres. Also the thick C pillar hides a bit of a blind spot. Thankfully on higher grades a reversing camera is fitted. 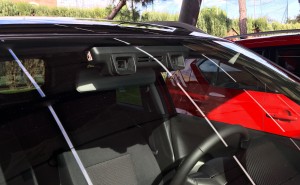 Safety features strongly with Ignis. Euro NCAP has awarded it three stars in standard form. If you have the safety pack option fitted the NCAP award rises to the maximum five stars. This figure is all the more impressive when you consider the significantly larger FIAT Tipo fitted with its own safety pack scored just four stars in the same test. Ignis’s safety pack option includes AEB autonomous emergency braking, lane assist and radar assisted braking on main roads. The clever dual camera brake support system that is used for autonomous braking was not available in time for the NCAP test. 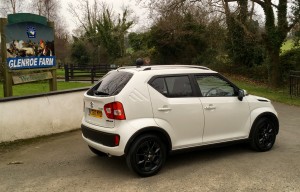 Ignis – at the Ireland launch.

Suzuki Ignis retail prices start from €12,995 for the SV3 but the expected big seller will be the SVT at €14,995. AllGrip is only available in the SHVS SV5 that costs from €17,995.
Suzuki sales in Europe are rising and Ignis will help the figure grow. Ignis is a niche player in a tiny sector of the new car market but it deserves to do well.

Suzuki Ignis has lots of character and will make you smile.