Trending
You are at:Home»Reviews»Suzuki Swift Sport review
By Michael Sheridan on 08/05/2018 Reviews 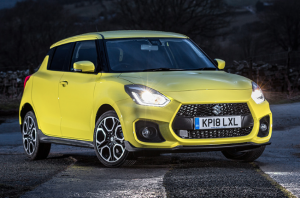 The Swift supermini is a great little car we love at Motorhub. So what happens when you put a 140hp engine into the car that does just fine with a lot less power? The petrol powered Suzuki Swift Sport goes like a nine month old puppy let off the lead… that’s what!

The swift performer (sorry) is practical and entertaining at the same time. You can potter along confident in the knowledge that you have ample power to mix it with the big boys should any try to bully you on the motorway or better still tackle narrow twisty roads whilst exploring new routes just for the fun of it. 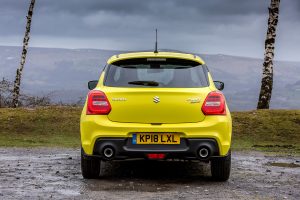 A few subtle styling elements at the front and side point to the warmness of the hatch but at the rear the two exhaust pipes make a definite statement of intent. Under the skin the suspension features Monroe shock absorbers, thicker anti-roll bars with new Teflon mounts, wheel bearings and hubs have been engineered in to single units and camber is stiffer by 15% when cornerning. Reworked and stiffer torsion beam trailing arm rear suspension features. The brakes are uprated too with big vented front discs. The Sport’s variable ratio steering rack is sharper and now features a tighter turning circle . 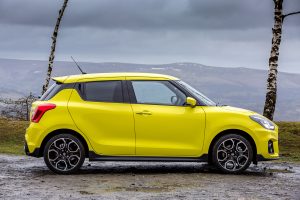 The engine is a ‘Boosterjet’ (turbo) petrol 1.4 litre producing 140hp and 230nm of torque. The sprint from 0 to 100km/h takes just 8.1 seconds and top speed is 209km/h (130mph). Emissions for that power are a commendable 125g/CO2. Average fuel consumption is 5.6L/100km (NEDC) or 6L/100km (WLTP). When you factor in that the 70kgs lighter new model Sport weighs less than a tonne (975kgs) that means the cute small five seater can deliver very healthy and at times giggle inducing on road performance. Masao Kobori, Chief Engineer for the new Swift Sport says “We had a brilliant foundation to work from, because the new Swift ‘HEARTECT’ platform is incredibly light and rigid. Our team had hundreds of new design and engineering ideas, but these ideas only made it off the drawing board if they added performance and emotion. We’ve made the car lower and wider, and packed it with lightweight technology.” 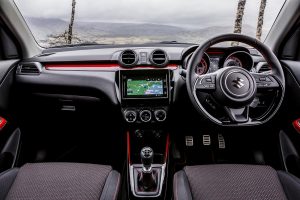 We took the Sport over the Wicklow mountains and also on the track at Mondello park and found the car very communicative. On rough surfaces it was a bit fidgety but on the track the car felt consistent and pliable. I found myself able to use 100% of the available power a lot of the time as the chassis simply hung in and went where I wanted to go. Of course there was understeer and roll on the track when cornering but the limits of adhesion were excellent and I seldom washed out of a corner – even when entering too hot. Low powered cars are great fun on a race track as mere mortals like you and me can be on the power more of the time unlike with supercars that want to bite you for the slightest lapse in concentration. The only thing missing from the Suzuki Swift Sport is an exhaust note… Suzuki has fitted a sports exhaust system but I can’t here it! I’d settle for a fake rasp fed back through the sound system but there isn’t even one of those. A sporty car without a suitable soundtrack is Suzuki’s only failing with the Swift Sport. 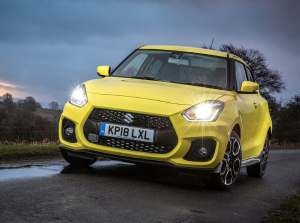 The Swift Sport is the range topping model and as such wants for nothing. Standard equipment is comprehensive and class leading with even LED headlights with auto high beam function a feature. Other notable toys include a reversing camera, Apple and Andorid smartphone connectivity, Sat Nav, adaptive cruise control, front fogs, 17 inch diamond cut alloys, air conditioning, and four electric windows. Safety is high on the agenda with autonomous braking DSBS (dual sensor brake support), a driver weaving alert function, six airbags and a host of driving aids including lane departure warning and prevention (with steering intervention). Metallic paint a no cost option on all Swift Sports.

Suzuki is no slouch when it comes to delivering small cars that are both practical and fun. The Japanese firm’s range features the brilliant Ignis, the excellent bang for buck Baleno. Lets also remember its rich heritage in more traditional all wheel drive vehicles too. The SX-4 and Vitara SUVs offer good value and in a short while we’ll get a new and greener Jimny. 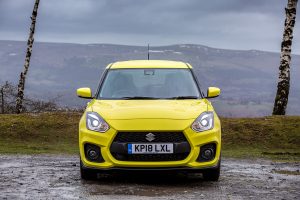 The Suzuki Swift is a great car and with the arrival of the Swift Sport in June the range is complete.

Pricing for Ireland is still being finalised and we will paste prices here when we get them. As a guide, UK pricing is £17,999 and this figure undercuts its rivals by some margin.