Trending
You are at:Home»Reviews»Toyota Aygo review
By Michael Sheridan on 05/08/2018 Reviews 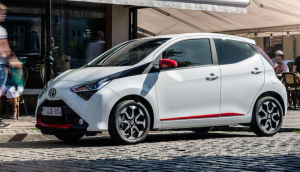 The cheapest Toyota has been given a makeover. The petrol powered 1 litre Aygo starts from €14,355, firmly placing it at the heart of the urban runabout market. The Aygo has always had a cheeky attitude and when you factor in the low entry price it will always be an attractive proposition, especially to low mileage buyers. 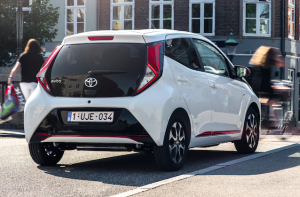 Launched in 2014 the four seat, front wheel drive car has been freshened up for 2018 on the outside with bolder styling and inside with a new touch screen among the highlights and more toys to play with. Under Aygo’s tiny bonnet, it must be the smallest in existence, the three cylinder in-line engine has been given a few tweaks: power is up slightly, there is smoother power delivery courtesy of a new balancer shaft and emissions are improved to become Euro 6.2 compliant.

The Aygo, as you may know is a triplet. The car is a co production with PSA’s Peugeot with its 108 and Citroen with its C1 variants. 2014 singnalled Toyota’s intent on bolder designs and Aygo gave us the dynamic looking front end that with the latest revision is even bolder. For a modest €397 buyers in Ireland can specify a colour pack that adds flashes of contrasting colour to the front end, mirror caps and flanks (red, white, black or silver) that are cheerful and fun. LED running lights and tail lights are now standard. The grades available are Play, Play+ and Trend. Equipment is impressive, my test car had Apple CarPlay and air conditioning too. 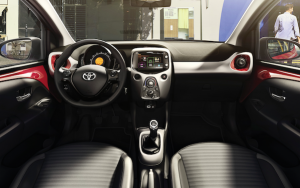 Nearly all city cars use a 1 litre petrol three cylinder as they are light and compact with brands offering more power and even 1.2 litre units. The Aygo’s 1 litre produces with 71hp (53kW) and 93nm of torque. It can handle motorway speeds but mind how you go at speed on windy days. The Aygo is very light weighing in at between 855kgs and 915kgs depending on model. In crosswinds it can be shoved about a little so drivers need to be that bit more attentive on longer runs and open stretches of motorway. The sprint from a standstill to 100km/h takes 13.8 seconds. To make brisk progress you need to keep the power on and foot down. Treat the standard five speed gear box like a four speed with an overdrive and you’ll be able to keep up with fast moving traffic. The gearbox is not that precise and it takes a while to get used to the levers position too. An automatic gearbox option is available called X-Shift. Top speed is the magical 160km/h or 100mph in old money. The Aygo is a frugal runabout delivering 4.1 litres (68.8mpg) on average from its 35 litre fuel tank, I managed to average a respectable 5 litres (56mpg) over about 500 kilometres of testing. Boot space is limited with 168 litres but the two rear seats can fold down. The Aygo is one of the most compact cars you can buy and at 3,465mm shorter than its rivals, making it a really easy to park. 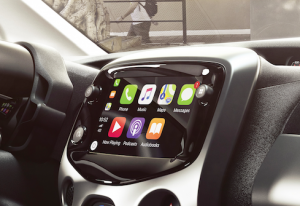 City use is what the Aygo is all about and when you don’t challenge it the car happily goes about its business. Try to take a corner too quickly and you won’t find much side support from your seat and the suspension will let you know you are not in a sporty car – and that’s okay. It, and its pint sized siblings, have a tough ask to better the VW group triplets of Volkswagen up!, SEAT Mii and Skoda Citigo – cars I love. Even then, the KIA Picanto (perhaps my favourite city car along with the Suzuki Ignis) and class leading Hyundai i10 are better still, and more practical too with seating for five. The city car market is tiny and there is little or no margin for car makers in the sector but these little machines like the Toyota Aygo make so much sense if they fit you lifestyle. The cash outlay is small as is the depreciation over time. 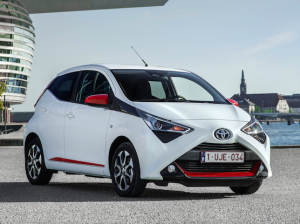 I often experience interesting reactions to what I drive and it tends to be when driving exotic machines. While cruising up a hill towards my home, okay maybe less cruising more… ‘foot hard on the accelerator’ in an effort to keep up momentum – towards my home, I heard “look at that car!’ followed by giggles of amusement and affection. The sound came from a bunch of kids no more than 10 or 12 years old. I looked at my 14 year old son, a fellow petrol head, sitting beside me and we both laughed out loud. 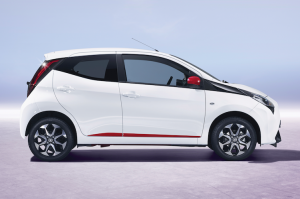 The Toyota Aygo is a fun little thing.