Trending
You are at:Home»Reviews»Toyota C-HR International Launch Review
By Michael Sheridan on 22/11/2016 Reviews

Car buyers in general are a conservative bunch. While we critics love innovation and daring design, the bean counters of the motor world know a radical looking machine can be a hard sell. Car models tend to gently evolve from generation to generation and this allows buyers to ease themselves from one machine to the next – so what the hell has got into Toyota with the new C-HR!

C-HR is a striking looking C segment SUV crossover that looks like it was built directly from a design sketch. It’s as if the giant Japanese firm forgot to dull down the five door machine that was developed with just Europe in mind. The C-HR is very close to a concept car that was at the Paris motor show in 2014 – ‘I thought you were sending the memo?’ 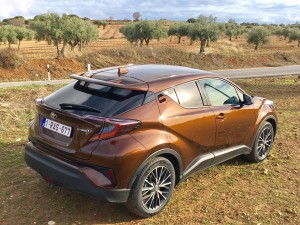 Toyota is a huge company and set to regain the number one top spot in the world this year. It became huge by offering sensible dependable machines. Often its machines lacked visual excitement but every now and then Toyota would buck tradition and deliver a really interesting exterior design. Toyota with the five door C-HR told us that right from the off it was targeting a specific customer who would appreciate a very distinctive car and expects 70% of sales of the Turkish built machine to be conquest sales with customers new to the brand. 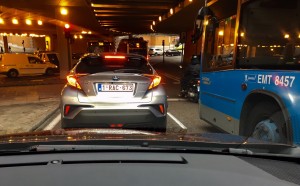 The car looks great but what’s with the name! Coupé High Rider is a ridiculous name for a car but thankfully Toyota has abbreviated it to C-HR. It was the in-house name for the car and over time… it stuck. Still C-HR hardly slips off the tongue and is easily confused with Honda’s CRV or HRV. The upside is letters can be easily pronounced in lots of languages.

C-HR is the second car built on Toyota’s new GA-C platform – after the current fourth generation Prius. The car features a lowest in class centre of gravity to aid dynamic handling.

C-HR is similar in size to its main rivals Tucson and Qashqai. The main difference is the sloping rear and high bodywork around the C pillar where you’d expect to see much larger side windows. C-HR is 4360mm long, 1795mm wide, 1555mm high (Hybrid) and sits on a 2640mm wheelbase. The exterior styling is influenced by cut gemstones and the angles and panel surfaces are styled to reflect this. Design students take note – the style language is called ‘Under Priority and Keen Look’ design identity (first used in the 2012 Auris) and ‘Sensual Tech’ interior design. In other words the design team were let off the lead on this one.

Curves and creases dominate the styling. The rear taillights are nuts and work well among the spoiler-fest that is found at the rear of the car. The rear doors have handles set high up and almost disguised. There is room for two adults in the back where there are three seat belts. There is enough legroom but headroom is a little tight. The rear is dark and kids on boosters won’t enjoy the lack of visibility. The driver also suffers from poor rear side vision thanks to the highly styled rear three quarters – but you do get used to it.

Inside the near Nissan Qashqai sized cabin you’ll see a layered approach to the dash design. This works brilliantly and is a cohesive bit of design. The standard 8 inch touch-screen display pleasantly dominates the centre of the dash.

A high end 576 Watt JBL sound system is optional but despite the high output could be louder. The availability of this impressive sound system reflects the desires of the target audience. The boot can holds a useful 377 litres – but cargo carrying capacity is limited due to the angle of the rear window. There is no spare wheel either, just an inflation kit. 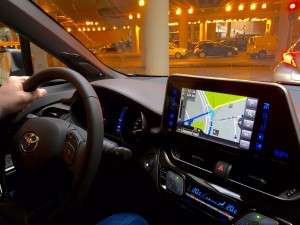 Power comes from one of two power sources, a 1.2 litre turbocharged petrol engine that was our favourite and a 1.8 litre petrol hybrid that makes sense for urban users – there is no diesel. The new four-cylinder high-compression 1.2 litre turbo engine we know from the Toyota Auris, pushes out 116hp and 185nm of torque. CO2 emissions are relatively high by today’s standards at 139 g/km. It has a 6-speed manual gearbox or there is an optional CVT auto (Continuously Variable Transmission). CVT equipped 1.2 versions are available also in all-wheel drive. ‘Multidrive’ versions that use a dynamic torque control AWD set up. Power is distributed via an electro magnetic coupling that can switch from 100% front wheel drive to 50/50 power distribution. 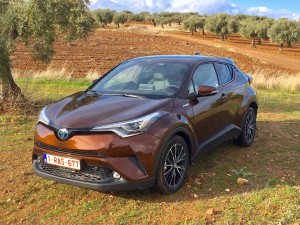 The latest-generation hybrid power plant from the current Toyota Prius features, so there is a 53KW (71hp) electric motor and a 1.8 litre VVT-i petrol engine providing the power. The hybrid system in C-HR powers the front wheels and generates low CO2 emissions of just 88 g/km. Toyota is rightly proud of this lowest in class figure. Toyota quotes a combined fuel consumption of 3.7 l/100 km on 17 inch wheels. With an output of 122hp and a good amount of torque pick up the hybrid offers adequate performance. 0-100kph takes 11 seconds… it’s no rocket but the early kick from the electric motor makes it feel quick about town. Day one of testing and we took to the roads around Madrid in the hybrid. The CVT gearbox still whines but the sound is better muffled. Our test vehicle was a top spec Sol and had 18 inch alloys. On the open road the ride was pleasant and soft when pressing on. About the city and surrounding towns the ride was a little harsh and we blame the big wheel size for this.

The four cylinder 1.2 we tested on day two was the best fun. The car handled much more like a hatchback and the new intelligent manual gearbox that blips the throttle on downshifts and has an anti stall feature when moving off, worked very well. This version had the right attitude behind the wheel and is well able to cruise at motorway speeds also.

There are three familiar grades Luna, Luna Sport and SOL and prices start from €26,895 for the 1.2 petrol and €29,350 for the entry hybrid. The car is on sale now at Toyota’s 47 strong dealership network in Ireland. In 2017 around 3,000 units are expected to find Irish homes.

A 148hp 2 litre is available in Russia and the Caucuses, but not in Ireland. AWD versions will be available mid 2017.

Akio Toyoda, the boss at Toyota, ‘Our determination is to allow greater stylistic freedom and promote engineering creativity in order to achieve eye-catching designs’. Well fair play to you Toyoda San you’re certainly heading on the right track. C-HR has a futuristic exterior that Judge Dredd would be proud of… it could even be Batman’s Gotham runabout.