Trending
You are at:Home»Reviews»Toyota Corolla Hatchback review
By Michael Sheridan on 19/05/2019 Reviews 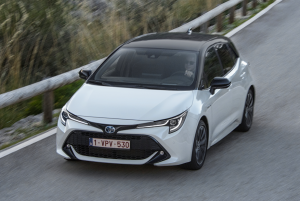 The Toyota Corolla is a global phenomena with vast sales all over the planet – so no pressure then on the new version! The latest Corolla is built on a new platform and comes in three body shapes; saloon, ST station wagon and hatchback. We’re putting the ‘Auris’ hatchback replacement to the test this week. 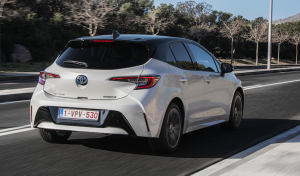 The five-door front wheel drive compact car features evolutionary Auris styling so while it won’t find its way on to any bedroom walls it still ticks a lot of boxes as a family hatch. The car has curves and is not unpleasant on the eye but it lacks a certain sharpness. The grille is now huge as a result of using less paint and more black plastic on the front bumper than with the Auris. This street identity makes the car identifiable as a Toyota in a rear view mirror and is very much the current trend. The rear of the hatch demos more curves and is surprisingly pointy at its badge. The new Corolla sits low and squat on the road and this also benefits handling. This planted look is amplified when you factor in that all our eyes these days are preconditioned to see the endless stream of tall SUVs and crossovers. Next to a Toyota C-HR the hatchback Corolla looks ultra conservative and dull. 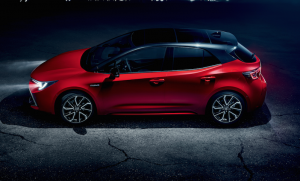 So who will buy it? Apart from existing Auris buyers the obvious line is someone who needs more space than a Yaris. Price is the real key. The Corolla hatch is almost three grand less than the 27 grand C-HR so there is a market for the hatch. Corolla hatchback pricing starts from €24,380 for the 116hp, 1.2 litre, petrol powered entry model with the Corolla hybrid (petrol/electric) costing from €26,995. The Corolla saloon starts from €25,685 and the Touring Sports from €28,420 and both are quite different propositions to the more compact hatch. Luna, Luna Sport (Bi-Tone paint) and Sol are the grades. LED taillights are standard across the range. 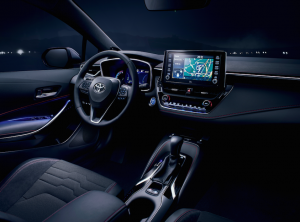 Inside the cabin there is plenty of space up front but the rear is a little tight. A new and large touch screen dominates the dash in my Luna Sport. Soft touch materials are used and overall clutter is reduced. The glaring omission on my Luna Sport model was the lack of Apple CarPlay. The huge screen offered Mirrorlink and other options but nothing for my iPhone (feel free to laugh Android users). It did display huge infotainment and trip information but ultimately annoyed me without the connectivity we’re used to especially for the guts of thirty grand. 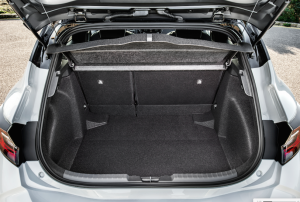 The Corolla hybrid is available with two power outputs. Our test car is the lower powered version and not the 178hp/190nm version that starts from €32,915. It pushes out up to 122hp and up to 142nm of torque through its front wheels via an automatic (CVT) gearbox. The Corolla is near effortless to drive as most autos are these days. The hybrid Corolla uses a 1.8 litre four cylinder petrol engine and an electric motor in a number of ways. The car can run on electric power alone, a combination of electric and petrol power or petrol engine on its own. The engine provides power to recharge the battery pack in the hybrid system and the brakes will regenerate electric charge to the batteries when applied or when you lift off the throttle. There is an EV button, that when the system allows it, lets the driver select electric power only. A couple of mornings when a stealthy start would have been the considerate option the internal combustion engine fired up. The car decides when it needs to run the engine and charge up the battery pack and on each occasion the battery display seemed healthy. 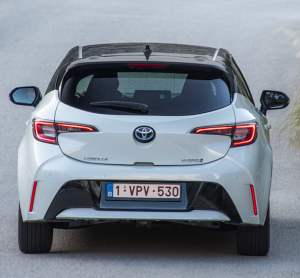 Those old enough to remember the heroic Corolla TwinCam can recall a ‘hot’ Corolla but the modern Corolla is not a bad boy and desperately needs a hero model to set pulses racing a bit. The hybrid is quick enough though and while the hybrid is capable there is no drama in how its gets its power down. 0-100km/h takes 10.9 and top speed is 180km/h. Toyota Safety Sense is an impressive package of electronic driving safety aids that can now be offered with the new TNGA platform and this brings it up to what is expected in the class in terms of ADAS safety features. 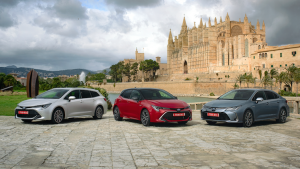 2006 was the last time we had a Corolla hatch badge. While the Auris sold well its name and sales could never be combined with the Corolla in official figures. The global sales success story that is the Corolla family looks set to see the new range top the sales charts in Ireland in the not so distant future. Of the three Corolla models on sale, if I had to rank it next to its siblings it would be number three.