Trending
You are at:Home»Reviews»Toyota GR Supra review
By Michael Sheridan on 22/03/2020 Reviews 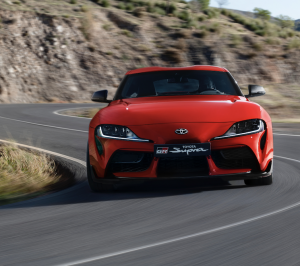 A two seat sports car with a three-litre, in-line six-cylinder, powering the rear wheels – what’s not to love! We’ve been putting Toyota’s Gazoo Racing (GR) Supra through its paces to see if the 340hp/500nm Japanese twist on BMW’s Z4 is worth its €81K+ price. 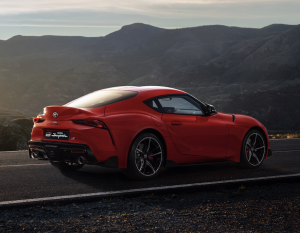 As partnerships go Toyota and BMW is one to savour as both has delivered quite distinct cars with the Supra and Z4. The fifth generation Supra brings a classic nameplate back to life after a long absence since 2002. The Supra is a Toyota that is deserving of a poster to adorn any kid’s bedroom wall. It’s not a ‘self charging’ hybrid though, and instead of a greener solution to turning the wheels coms with a thirsty petrol engine under its long bonnet. So without a hybrid or electric powered version the Supra is hardly a car for the future, so what is it? We believe the Supra is simply a joyous celebration of the sports car – pure and simple. 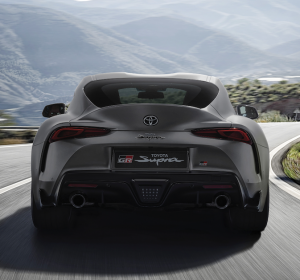 The two seat Supra is a striking looking car yet quite compact at only 9mm longer than a Corolla hatchback! It is marginally longer and wider than its stable mate the Toyota GT86 – another collaboration with Subaru this time and its BRZ. The coupe features a beautifully sculpted bonnet and front end, its roofline is a double bubble while its flared flanks are lovely to look at through the side mirrors. The rear is a mess of curves and slashes but somehow it all works. Two big exhaust pipes sit unashamedly either side of the rear diffuser. There are lots of faux air vents/breathers used on the body and for some they appear to contrived but hey its styling and seems to work. Our test car especially striking as it was unique in Ireland. The special ‘A90 Edition’ featured grey matt paint that could only be hand washed, so we needed to mind the beauty – no pressure on us, and no pressure washing! The Supra sits low, is lightweight and stiff and these are core ingredients in any good sportscar. 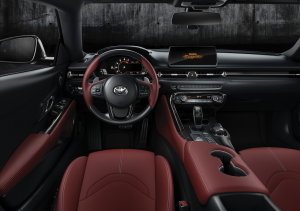 Access to the cabin is tight as the roof and sill are quite close. Once in the cabin you see lots of shared Z4 BMW bits with only token Toyota touches. The driving position is good and the cabin quality, ambience and materials used are fine but unremarkable for the 80+ price tag. The good news is that the car is all about driving enjoyment and we felt very happy with just a steering wheel and pedals! 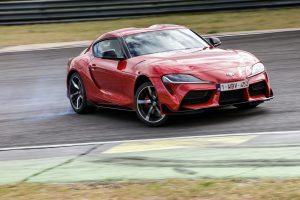 Supra features 50/50 weight distribution and what is called the ‘golden ratio’ of wheel track to wheelbase for what Toyota describes as Go-Kart-like handling. The Supra’s track is 14mm wider than a Camry’s despite being some 506mm shorter than the Camry. In the real world the car is wonderfully nimble with suspension that feels utterly sorted on the road. Supra’s turbo power is delivered through a ZF eight speed automatic with steering wheel mounted paddle shifters. BMW’s engine has been tuned by Toyota to deliver a healthy and usable amount of power (340hp/500nm). 0-100km takes 4.3 seconds via the Supra’s launch control system. The rear of the car features brilliant differential that can lock up either wheel to 100% in an instant to ensure most of the power is delivered to the road in the form of grip. All versions of the Toyota GR Supra sold in Europe are fitted with the active differential that works when accelerating and decelerating. A dedicated ECU monitors a wide range of inputs, including steering wheel, throttle and brake pedal operation, engine speed and yaw rate, for appropriate triggering of the actuator. 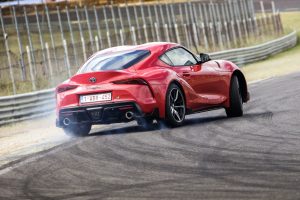 The Supra can hustle along twisty route with the very best of them thanks to its incredibly well sorted suspension set up and power delivery. As a cruiser the Supra is effortless and in no way harsh. The lift back boot can hold modest 290 litres of luggage and you can also reach in to the boot from your seat as there is no bulkhead. 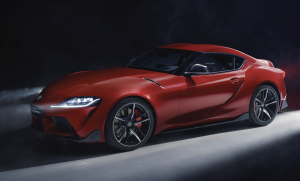 Toyota’s Supra is built in Austria by the car maker Magna Steyr. Toyota would not have made this Supra if it wasn’t for the economies of scale from partnering up. Despite its European origins the Toyota Supra is true to the original’s spirit. 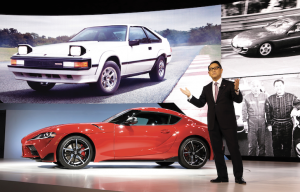 Toyota President Akio Toyoda, who is a handy driver, said: “The new GR Supra was born through testing at Nürburgring, and I can honestly say that it is a car that is fun to drive and better than ever.” Motorhub was shown a 2 litre four cylinder version recently by Toyota Europe but as we write there are no plans for its introduction in Ireland. 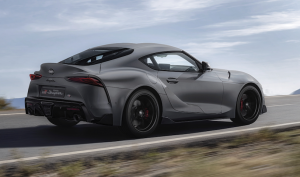