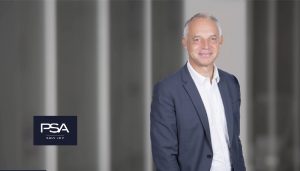 Today we went to PSA Group HQ in Paris to hear its thoughts on electric vans. Van Live-e is the French giant’s launch pad for its mid-size electric van that will join Peugeot’s Partner range, Citroen’s Dispatch (Jumpy in Europe) range and Opel’s Vivaro range. Xavier Peugeot, VP PSA’s Light commercial Vehicles told us that its on track to have a fully electrified LCV range by 2021 – and by 2025 the EV market will be ten times bigger than now.

In a general comment Xavier said performance does not and should not suffer with electric LCVs over regular light commercial vehicles (LCVs). Electric versions will also not lose out in load space with a payload of 1275kgs and the EVs will have a 1000kgs towing capacity. In terms of outright capacity there is circa 115kgs carrying capacity in the electric version next to its diesel version.

Head up display, short wheelbase versions and hands free door opening are all attractive features plus all the safety systems you can get on the regular ICE versions. The electric motor is found in the same place as an engine – under the bonnet. The battery pack come in two capacities and is located under the floor between the front and rear axles. The 50kWh battery weighs 383kgs, 75kWh battery weighs 534kg. There is no heat pump option.

Some figures: Power is 136hp with a torque figure of 260nm. Top speed is 130km/h (France motorway limit). Two range options will be available of 230km or 300km. Stats quoted by Xavier make interesting reading with 83% of buyers covering less than 200km per day. 44% of potential buyers never drive more than 300km per day.

In some countries three phase is available widely an 11kW on-board charger is standard (German homes have three phase) but most will have a 7.4kW on board charger as standard. Charging up to 80% takes as little as 30 minutes at a ‘superfast’ public terminal.

50% charging from a three pin domestic plug will take overnight. The same time spent at a EV wall-box will deliver a full charge at home. The battery gets an 8 year warranty with a minimum of 70% battery capacity guarantee. Also owners can get a ‘Battery Certificate’ concerning its health that can be used to reassure buyers.

PSA’s ‘Free2More’ app points out charging breaks needed and PSA also offers a special pass that would allow them swap in to a vehicle with an engine for a period of time.

Orders will open in July for LCVs van versions and September for the new range of passenger car versions. By the end of the year all variants will be on sale. PSA says electric variants are expected to account for 5% of each model’s sales in the first year then 15% in subsequent years, but will be under review. A larger van version is coming also in early 2021.