Trending
You are at:Home»Reviews»Volkswagen Arteon 2.0 TSI
By Michael Sheridan on 01/11/2018 Reviews 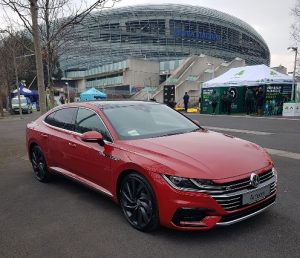 There is no denying how pretty VW’s Arteon business coupe is – especially in R-Line trim, but what is the petrol powered version like to live with? We’ve been cutting a dash in the sleek machine while racking up over 1,000 kilometres of vigourous testing. 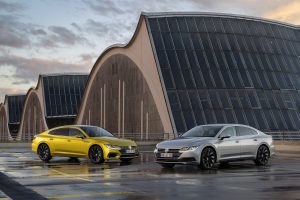 A few years ago the thought of a petrol engine in business machine would have been unheard of, but the swing is happening. Despite company users being unable to claim back VAT on petrol, something they can do with diesels, the four-door five-seater can still make sense for user owners who can claim business mileage. Of course there is a drop in torque, that glorious pulling power that diesels deliver but Volkswagen is doing a good job at squeezing out newton metres (nm) from its petrol engines. With petrol engines generally the mpg and emissions are higher compared to the diesel equivalent, but still Volkswagen has done a reasonable job in making the 190hp four cylinder unit a decent proposal. For a start annual motor tax is a modest €280 – so only a modest rise in the CO2 band.
With Arteon its all about the looks. Our test car came in a striking Chilli red metallic and was shod with beautiful black 20 inch Rosario rims with sticky 245/35 P-Zeros (19s are standard). The paint, adaptive chassis control and a technology pack (better Nav and audio and large sunroof) were extras (totalling €3,897) that really set off the Arteon and made it loom and feel more than just a posh Passat. 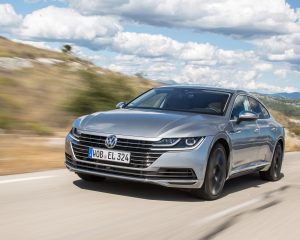 On the road the five door lift-back is an assured performer and refreshingly quiet thanks to petrol power. You can select from the familiar VW drive modes that include Comfort and Eco settings. The DSG automated gearbox in our test car added to the premium feel – I mean who wants to manually change gears in a premium machine) and steering mounted paddle shifters were present too. The overall driving experience delivered is one of competence rather than thrilling excitement. Kilometres are consumed effortlessly and in comfort. At times we cruised with four up and there was ample space in the cabin. The Arteon has a longer wheelbase than the Passat sits on and this adds to the ride comfort. The large tailgate is quite heavy to lift but when opened reveals lots of cargo space. 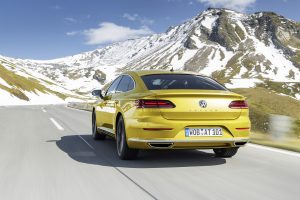 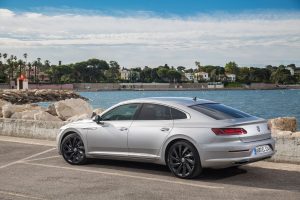 The Arteon range starts from €39,650 and is is devilishly handsome – but it has to be. Our test car for example was specified they way we’d like it but that brought it in over €51K and that’s right up against better established €50K+ machines where badge snobbery comes in to play big time.

Thankfully there is still life left in cars that are not SUVs or crossovers – especially if the motorway is home, but the conventional car seems to be a much harder sell for manufacturers and ultimately they may lose interest in delivering these types of cars to the market.