Trending
You are at:Home»Reviews»Volkswagen Golf preview
By Michael Sheridan on 10/06/2020 Reviews 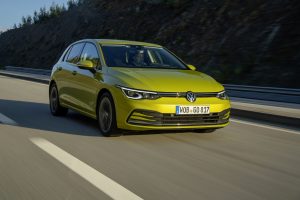 It’s not today or yesterday since the first Volkswagen Golf came along. As a young nipper in the mid 70s I remember how strikingly simple and different the front wheel drive hatchback was. Oddly I can still hear the deafening rattle of the 1.9 diesel version my friend’s Dad had – It was the polar opposite the iconic 1.6 litre GTI (1976). The mark 1 Golf’s exterior stood out next to competitors like the Ford Escort and other of the time. Ireland was a die-hard saloon car buying market but the hatch grew on us over time to become a number one seller. The latest and 8th generation VW Golf has just been launched in Ireland. Prior to testing it on the road we attended a virtual press conference today. 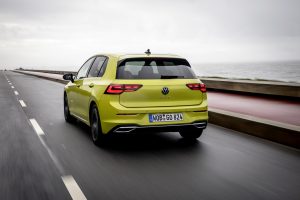 So what should we be excited about with this evolution?

Tech. There is loads of new technology including Amazon ‘Alexa’ that is built-in! The 8th generation is built on the same platform as the outgoing car but the car’s connectivity is given a big overhaul. In the cabin screens and digitalisation feature high on the agenda. Golf’s new ‘Innovision Cockpit’ is impressive. The current trend for big touch screens (Tesla rules here) certainly impress but there are times buttons and switches can be required. Again we look forward to seeing how well they work on a damp winters morning. 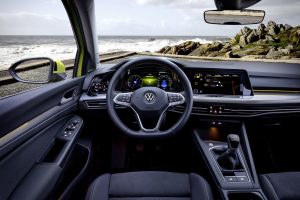 Connectivity. Apart from ‘Alexa’ always listening (you can switch her off – cough!). Volkswagen’s ‘We Connect’ and ‘We Connect Plus’ bring internet/data streaming, internet radio and other online features to the Golf. These features are no doubt highly impressive and a far cry from the bread and butter family car Irish buyers bought in their droves.

Exterior. Styling changes are subtle and the car has the same footprint as the 7th generation. The exterior doesn’t have an edge in common with the angular original Golf and looks very curvy and aerodynamic. Thankfully there isn’t the slightest hint of SUV or crossover in its styling styling – I feel the lines are too blurred these days between models. As the car is German owners of the current model Golf will see a natural but conservative progression in design from their car. We’ll look closer at this aspect in our full review. 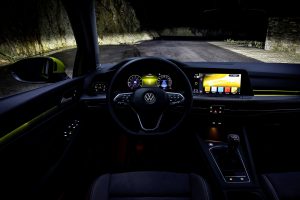 Interior. Always impressive the new Golf has upped its game and high grade versions appear to compete with premium rivals such as the Mercedes Benz A Class.

Under the bonnet. Nothing radical but its engines are more efficient with petrol/Diesel engines from launch. A 1-litre 90hp four cylinder continues as the entry petrol engine of three (1.0 110hp & 1.5 130hp/150hp) with a 2 litre diesel available in two power variants (115hp/150hp). A 48-volt mild hybrid 1.5 litre ‘eTSI’ features in the range. later this year we expect a PHEV plug in petrol hybrid is on the way too with 204hp. Two trim levels will be available ‘GTE’ and ‘Style’ – both will have a 56km electric only range  from its 13kWh rechargeable battery. VW Ireland says its ‘Performance’ Golf models will launch nearer the end of the year. 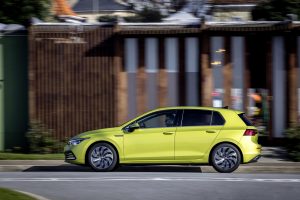 The whole EV thing left to the VW’s I.D. electric range of cars. Again we look closer in our full review.

VW Ireland told us that it has simplified the offerings with new Golf. VW Ireland is proud of its new finance offerings that come under the banner ‘Volkswagen Assurance Plan’. Donal Geoghegan, dealer principal with Frank Keane Volkswagen, told the press conference that business is brisk since easing of lockdown measures and that people attending dealerships are further along the buying process. Used stocks are drying up though. His most positive statement about the health of the industry is “We are seeing strong demand”.

We’re road testing the car soon so remember to click to our review section where it will pop up.