Trending
You are at:Home»Reviews»Volkswagen Passat review
By Michael Sheridan on 18/07/2019 Reviews 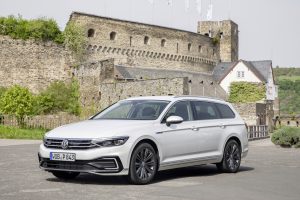 30 million sales since 1973 means the VW Passat is a significant player in the car world but with the rise of SUVs the five seater has seen sales plummet. Volkswagen Ireland’s current best seller isn’t a regular car but an SUV – the Tiguan. We’ve been testing the revised 8th generation Passat in Frankfurt to see if it has enough to stop the relentless rise of SUVs. 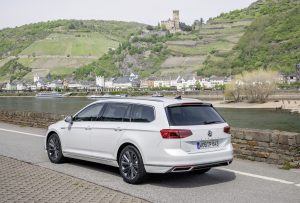 Outside changes included a revised grille, new bumpers and LED lights front and rear. The Passat name is spelled out in single letters on the rear. The saloon body is the big seller in Ireland but in Europe the estate is huge in sales terms. In the German market the load lugger accounts for almost 90% of sales – the opposite of the Irish market! The Passat’s styling is handsome and smart as always and the estate we’ve been testing looks very well proportioned. 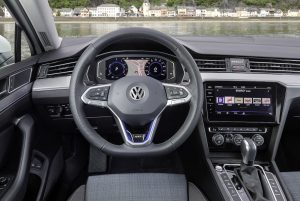 Inside the cabin is freshened up with some new materials and revised displays. There is a new multi function steering wheel that also can sense if it is being touched – more on that later. The centre console is redesigned to allow for wireless charging, you can also wirelessly connect to Apple CarPlay. Sadly the centre mounted analogue clock is replaced with a hazard warning button for Euro NCAP safety rating reasons we’re told. The AGR seats remain comfy and firm enough to allow long distance travel will good support. 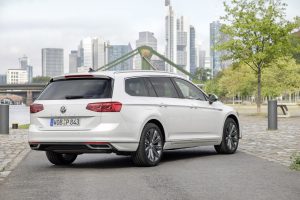 All motoring journalists love an estate – it’s the law! We’ve put the estate GTE through its paces. This model is even greener than before with less than 40g/CO2 and can deliver an astonishing 1.5L/100km (188mpg) thanks to its rechargeable battery and petrol engine combination. A 1.4 TSI engine and electric motor deliver a combined output of 218hp and 400nm of torque. There are three selectable drive modes. The car starts up in electric e-Mode and can drive up to 55km in electric only mode. It can also travel using just electricity at speeds up to 140km/h (+10km/h on the old GTE). Hybrid mode does what it says on the tin and you can also set the amount of battery power you have, or use, simply using the centre touch screen display setting. This allows you keep electricity for use in a zero emission zone or anywhere you wish. Charging the GTE’s larger 13kWh battery takes a maximum of five and a half hours using a three pin domestic plug socket. At a domestic EV charge port it takes just three and a half hours. The GTE comes with a CCS combo plug and can charge using fast chargers. 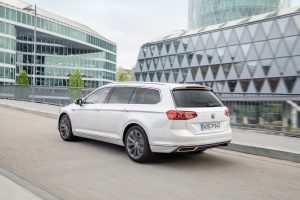 On the road the GTE is lively yet civilised at the same time. The power delivery is smooth via the auto gearbox and as a nice surprise the GTE can even tow up to 1,600kgs – A lot of hybrids can’t tow due to their battery hybrid layout. There is a slight compromise on cargo space with the GTE as the 50 litre petrol fuel tank is moved to where the spare wheel well is on the ICE estate versions. So no spare but the boot is pretty good at 483 litres. Fold the rear seats down and there is a healthy 1,613 litres of load space. 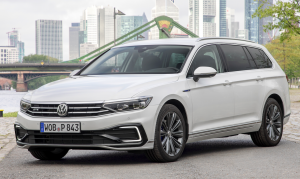 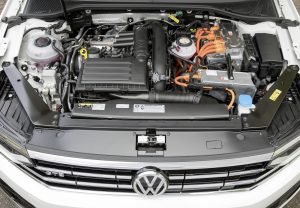 The engine range is revised and Ireland will get the new and efficient 2 litre TDI Evo 150hp diesel that is very green for an oil burner. The engine produces lower CO2 than its predecessor using a combination of a dual catalytic converter SCR system and dual AdBlue dosing – whatever that is ;-). There is a 1.5 petrol coming too but the most interesting Passat is definitely the PHEV plug in hybrid GTE.

Pricing is yet to be finalised and the budget in October will determine how expensive the car is but we expect the highly equipped GTE model to cost circa €42,000