Trending
You are at:Home»Reviews»Volkswagen Polo review
By Michael Sheridan on 09/01/2018 Reviews 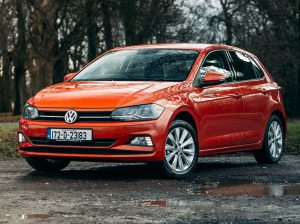 The latest Volkswagen Polo is looking to set the benchmark for small cars. I’ve driven the car in Ireland so let’s see if the little German is up to the task?

The five seat Polo comes in just one, five-door, body style. We already have a sense of how good the Polo should be as it sits on the same new modular platform that is shared with sister brand SEAT’s Ibiza – a seriously good car. As you’d expect the all-new front wheel drive Polo has grown inside and out. The sixth generation’s styling is a really smart and a well executed evolution of the outgoing hatchback’s. New Polo, as you’d expect, gets lots of optional electronic driving aids like front assist emergency braking, blind spot monitoring mirrors and a rear view camera to name a few. Critically the Polo gains a bit more personality as buyers can now customise their cars with nice paint finishes and new interior dash colours. 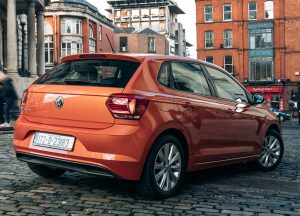 The German supermini is one of the biggest small cars you can buy. It is some 81mm longer than the outgoing Polo at 4,053mm and other dimensions have grown too. The Polo is 69mm wider, while its track (the gap between the left and right wheels) is wider with the front gaining 62mm while the rear gains 49mm. Only the roof line is slightly lower than the fifth generation machine at 1,446 (-7mm). Critically new Polo gets a longer wheelbase (+94mm at 2,564mm) that increases cabin space and also improves ride quality. The boot gains 69 litres and rises from 280 litres to an impressive 349 litres. 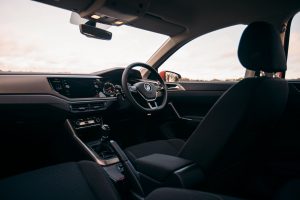 Inside the driver focused cabin there is almost Golf-like interior space. I’m 5’10” and I was able to sit behind my driver’s seat with my knees just brushing the seat back. There is lots of headroom too. The dashboard favours the driver and my comfortline test car featured nice colour coding to brighten up what traditionally has been an unexciting interior. Everything falls nicely to hand and the big surprise is that generally you feel as if you’re in a car from the class size above. 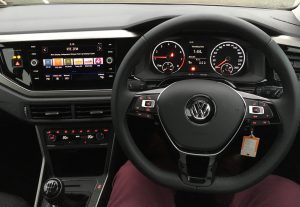 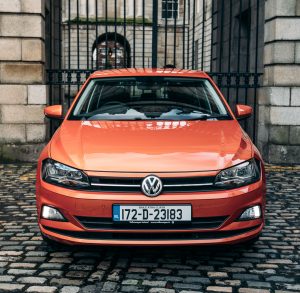 Three grades are available from launch starting with Trendline (from €16,795 ex works), rising to Launch Edition (from €17,595 for a limited run) and Comfortline from €18,695. The Polo is priced in a way to entice buyers into adding value packs that bundle optional extras at a discounted price. My Comfortline 65hp TSI featured €1,025 of options bringing its price to €20,495 on the road (inc. €775 dealer charges). 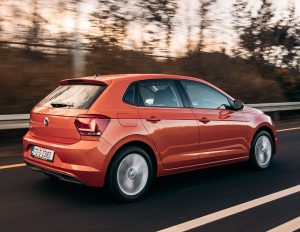 On the road new Polo is remarkably quiet and composed. The three cylinder TSI buzzed like all three pots do under acceleration but not in an intrusive way. The suspension felt sophisticated and I could feel the benefit of the longer wheelbase on poorer roads as bumps were less pronounced. The five-speed manual gearbox felt tight (DSG is optional on 95hp versions and standard with the GTi) and the brakes were good too. Steering ‘feel’ was a little lacking but the wheel itself felt good and dare I say premium. The car went where I pointed it with little fuss and was vice free. On the motorway I did need to work the car a little to get the 65 horses up to speed, but once cruising the Polo was perfectly fine. The Polo is a small car that can easily do big commutes. 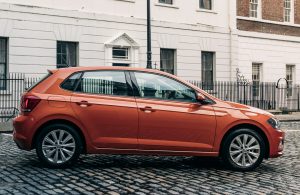 Volkswagen Ireland wants 12% of the ridiculously competitive small car sector and with the highly impressive new Polo I think that should be easily achievable.