Trending
You are at:Home»Reviews»Volkswagen Touareg review
By Michael Sheridan on 25/02/2019 Reviews 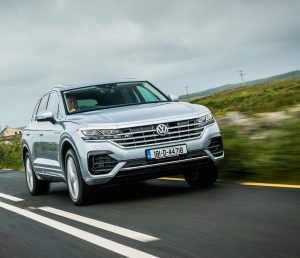 The third generation VW Touareg is a big, bold, beast. Volkswagen’s flagship SUV is now longer, wider and lighter but its imposing exterior remains instantly recognisable as the next generation of its famous all wheel drive machine. 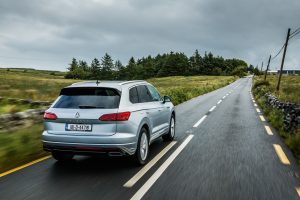 Those in the know are familiar with the fact that the large five seat VW is built on a shared platform with Porsche and Audi who use it for their respective big SUVs. The VW Group also share engines and Touareg’s 3 litre TDI pops up in all sorts of premium places. It a sad fact but true that badge snobbery increases with the asking price and Touareg is going to find it hard to sell in big numbers in the premium class in Ireland where it starts from €65,395. 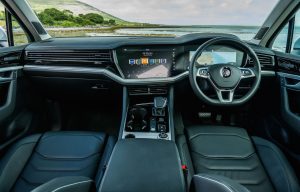 Touareg’s chunky styling looks as if it is carved out from a solid ingot. The big corporate VW chrome grille fills the mirrors of cars in front with ease. On closer inspection there is more detail and nice design elements to feast on both outside and in. The cabin is really comfortable and spacious. The one thing you cannot avoid is the dominating dash layout. A huge dual digital display, that literally draws gasps from passengers, favours the driver. Seriously, the screens are so large I kept one eye on the road and one looking out for TV licence inspectors! In day to day use the displays are great and even at night, when you think they will be too bright, adapt and work well. 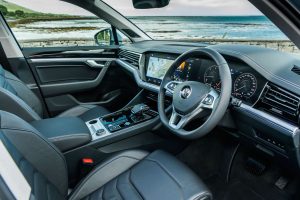 There is a lack of button clutter but you will need a few hours to get used to all of the features you can interact with on the display. After a week I was still learning and will have words with the designers about some improvements they could make next time we meet!

Power comes from a TDI that delivers 286hp and 600nm. This is a healthy amount of power delivered through its 8-speed DSG automatic gearbox that enables relaxed cruising and spirited driving when needed. 0-100km takes just 6.1 seconds and top speed is 235km/h. 600nm of torque is the key to the ‘waft along’ nature of the chunky machine. My test car was the smarter looking R Line Design grade (20s, HUD, electric folding tow hitch etc. etc.) with optional metallic paint weighed in at €86,151 on the road – still a lot less cash than the equivalent BMW X5 that starts from €87,390 for the entry model – but then again that’s a BMW. 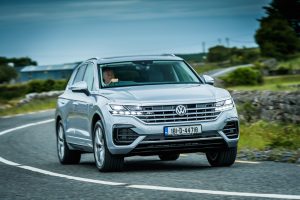 The Toureg rides well and shares the same chassis with Audi’s Q7 and Porsche’s Cayenne. On the road the 3 litre TDI is very brisk and has good road manners. I did some back to back testing with a Cayenne and on back roads and one particularly bad bog road the VW didn’t deliver as polished a ride. Again the VW is far cheaper than the Porsche. You can effortlessly select from a number of drive modes (via a dial) to suit the terrain and prevailing conditions – the car sorts all the rest out itself. 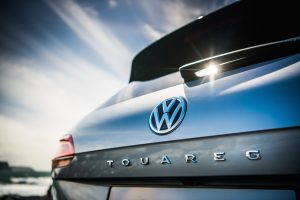 Named after the nomadic African tribe the big SUV as a car type finds itself having to move on and seek out a place for itself in a changing motoring landscape. Big diesel machines, while undeniably great still, are being shunned thanks to the pressure of VW’s own ‘Dieselgate’ scandal and the way it has accelerated the demonisation of diesel. Consumers can only buy what is put in front of them and in Ireland emissions are not as important as the sticker price. Ultimately buyers in Ireland have to ask themselves the ‘elephant in the room’ question: Can they justify paying a premium price for a car a VW badge? 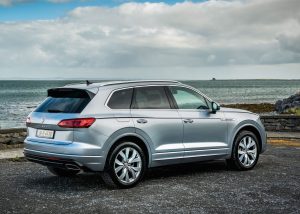 The old five seat Touareg was available to buy in Ireland as a commercial vehicle but the law was changed and it is not now. This will make it a rarer sight on Irish roads. VW has no plans for a Touareg seven seater either (the bigger still seven seat petrol powered VW Atlas isn’t sold here) and this makes it even less desirable in Ireland. The Touareg is an excellent machine, but sadly the price isn’t right for Ireland.