Trending
You are at:Home»Reviews»Volvo S90 Review
By Michael Sheridan on 17/11/2016 Reviews

The high rise XC90 shook up the large SUV market and now its low rise sibling is making an impact in the large car world. At the recent Irish Car of the Year awards in association with Continental tyres, S90 was pipped by the Mercedes Benz E Class to the 2017 Large Car title. There is no shame in that as new E Class is brilliant and S90 is hot on its heels.

Exterior styling is a strong point with the big Volvo. From 500 metres you can spot the Volvo. The grille is striking as are the Thor’s hammer daytime running lights. The car has lots of interesting body creases and lines to enjoy. S90’s proportions and overhangs are excellent. S90 has real street presence especially when riding on the high-spec Inscription’s 20 inch alloys. Lined up next to all its rivals you could be forgiven for thinking that the S90 is from a bigger class. Inside the cabin of S90 is very similar to the XC90. The seats are very supportive and on a long journey you get out of the four door with your back in better shape than when you got in. Like the XC90 you get a little Swedish flag stitched into the seat, which is a nice touch and gentle reminder that you are not in one of the more obvious German built choices. A cool upright tablet dominates the centre of the dash and it makes all its rivals touch screens look tiny. S90 features ‘Pilot Assist’ that is its version of autopilot/autonomous driving. Well in Ireland it is not quite fully autonomous as the auto lane changing function is disabled on these systems. Basically you get auto lane keeping coupled to adaptive cruise control that will take the car to a full stop. This system I found handy on long motorway drives only. At times the system would position the car too close to the lane next to me. At other times it could be caught out when driving in lane one for example and a slip road would appear. Auto pilot systems use a forward looking camera set high on the windscreen and other sensors to ‘read’ the road. I don’t have to tell you how bad road markings can be in Ireland and then add in adverse weather and you almost feel sorry for the highly advanced technology as it struggles to be foolproof. We still are a bit away from being able to trust fully autonomous driving systems but they are on the way and Volvo is at the cutting edge with S90. S90 has a good sub €50K entry price and there are the usual engine options plus some nicely specified optional packs that bundle extras together. A head up display is available also. 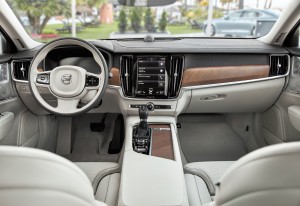 The ride is not quite as ultra refined as you might expect. The combination of big alloys on Irish roads is never ideal and even with the very trick optional rear air suspension in our high-spec test car, the ride comfort level was never brilliant despite being able to select from a choice of drive modes. Entry S90s ride on smaller 16 inch alloys and they should be more forgiving. Front wheel drive and all wheel drive (on demand) powertrains are available in the range. The standard fit 8–speed automatic gearbox is nice and smooth. Compared to the E Class the steering lacks a bit of feel. The Merc will turn in with gusto whereas the S90 is less keen to be hustled. Nine times out of ten this is perfectly fine for a cruiser but in this class of car the owner is still the driver and occasionally wants to enjoy a spirited drive. A tough choice to make. 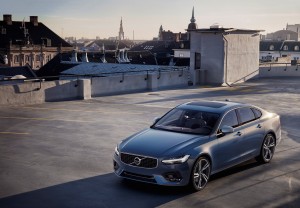 S90 is at the cutting edge of technology along with the Mercedes Benz E Class that is flying out of the showrooms and lets not forget the next generation BMW 5 Series due in early 2017. Also worth considering, but with less cutting edge technology, you could opt for a XF Jaaaggg. The lovely beast has a couple of years left before the next generation arrives, while the Audi A6 is always worth taking into account and of course the Lexus GS hybrid is effortless to use. 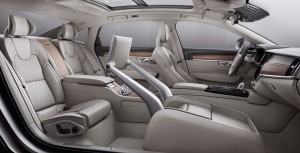 A V90 estate is on the way and the preference over the S90 for most motoring journalists who’ve driven it. A nippy T8 Twin Engine hybrid is on the way to add to the ‘D’ diesel range. One S90 I’d love to see here is available in China – the three seat S90 Excellence ‘Lounge Console’ version. This limo has no front passenger seat to free up room and even has a shoe locker in the cabin!

S90 is a luxurious large saloon that looks the business.