Trending
You are at:Home»Reviews»Volvo XC60 review
By Michael Sheridan on 26/05/2017 Reviews 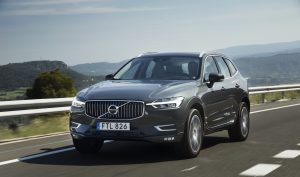 Volvo has thrown down the gauntlet to its rivals with the latest XC60. Europe’s best selling premium mid-sized SUV has been thoroughly modernized and it is a very good machine.

The Swedish brand can do no wrong it seems on the back of the 90 series machines in the form of the saloon S90, V90 estate and V90 Cross Country – that’s my favourite of the three. The new five-seat XC60 will get the limelight and plaudits for a few months until the smaller XC40 is revealed to the press at the end of the summer. The house design style at Volvo is very easy to buy in to and coupled with the car firm’s fanatical attention to safety, buyers get more than the sum of the parts when they buy a Volvo. The firm’s vision that ‘by 2020 no one should be killed or seriously injured in a Volvo’ looks very likely to happen and the new XC60 has a host of driving safety aids as standard and many more as options. One standard feature with the dramatic sounding name of ‘on-coming traffic assist’ is just one headline grabber.

The new XC60 is built on Volvo’s scalable SPA platform. It looks like a mini version of the XC90 and that’s not a bad place to start. XC60 is chunkier in the flesh and while it appears to have an imposingly long bonnet, its proportions are more Audi Q5 than… big beast. I went to Barcelona to test the new Volvo at its European launch centre. All XC60s coming to Ireland at launch time will be all wheel drive. Diesel engine options will include the D5 and a more affordable D4. A front wheel drive D4 and D3 will come to our shores in May 2018 when demand should have fallen off for the initial variants. Petrol power comes from the ‘T8’ twin engine plug in hybrid. it has a combined power output of 407hp/640nm. A T6 petrol is available, but Volvo Ireland has no plans to bring it in. 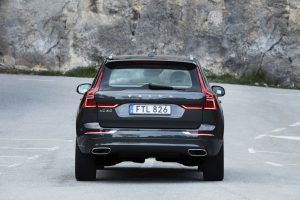 The exterior has all of the beautiful new Volvo design language that has recently won the Chinese owned Swedish brand so much critical acclaim. The grille and lights are pure XC90 while the long bonnet is more homage to the S90 saloon. The cabin is set rearwards and this is a design trick that is meant to shout premium car to the onlooker. The roofline is quite low and the car looks squat on the road and 18-inch alloys are standard with larger wheels optional. 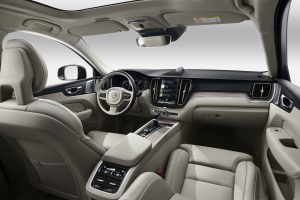 Inside, the cabin is elegant – pure and simple. As all our test cars were Inscription top grade models it was hard to feel anything other than content behind the wheel. Standard equipment is class leading with leather seats, sat nav, the same 9-inch touch screen tablet from the XC90 in the centre dash and heated front seats. Cabin space is class leading too for occupants while the boot suffers a little but is still a good size. I could easily sit behind myself with plenty of headroom too.

One piece of interior detailing that takes the 90’s stitched in Swedish flag in the seats to another level is the metal Swedish flag under the air vent. This little feature makes you smile and has form and function. The flag itself covers a join in the metal beading that is there to allow for heat expansion and contraction of the wood trim above it… clever.

On the road the ride depends on the suspension set up and drive mode selected. Standard suspension will feature on most versions with non-adaptive damping. When I say standard, eh, the XC60 does have Volvo’s quirky transverse leaf spring rear integral link axle. Up front there is a double wishbone setup. 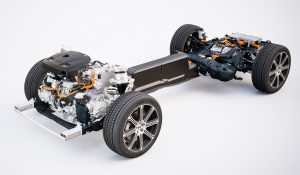 My two test cars were top of the range models and featured the optional air suspension that is available throughout the XC60 range and varies in price from €2,690-€32,973. The air suspension comes with ‘Four-C’ active dampers. This means you can adjust the ride comfort to suit your tastes as well as the engine mapping and ride height. The available settings are: Comfort (default), Individual, Dynamic, Off Road and Eco. Comfort was very comfortable with a soft ride that was perfect around the small towns outside Barcelona. Dynamic was the best choice when cornering had to be done with enthusiasm. The ride was firm but still comfortable with noticeably less body roll in the corners. The air suspension option might not be taken up by many, but it makes sense for those who might want to tow a horsebox. 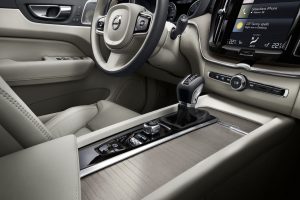 The 8 speed auto was smooth and you can specify paddle shifters if you wish although they are standard on the R Design grade. The D5 diesel pushes out 254hp/350nm and it is a lively performer. Riding on 20-inch wheels the car performed all I asked of it. The default driving style I ended up falling in to was cruising. The XC60 is a really effortless car to use and in the top grade you get all the toys and creature comforts to make you feel happy behind the wheel. The T6 was the only petrol model to test and its 320hp/400nm was more fun. The car accelerates with gusto and while under acceleration the gearbox was a little ‘droney’ the T6 was enjoyable. Volvo Ireland says 20% of its XC60 sales will be petrol hybrid T8s. XC60 is available in three grades: Momentum, R Design (the sporty looking one) and Inscription. A number of options and packs are available too.
Volvo XC60 is an easy car to like. Volvo Ireland expects to sell about 300 in the later part of this year. In 2016 the outgoing model sold 494 units. In Ireland 40 grand gets you a run out original XC60 (D3 ES manual front wheel drive) and while that’s still a lot of cash remember the new car in AWD starts from over 53 – so the run out is a bit of a bargain – especially for urban users. 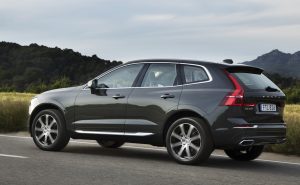 With the right specification XC60 challenges my favourite SUV in the class the Mercedes-Benz GLC – and it is brilliant!