Trending
You are at:Home»Reviews»VW Beetle review
By Michael Sheridan on 16/07/2017 Reviews 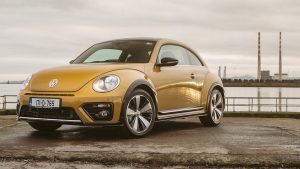 VW Beetle, are looks everything?

Fun fact; the first Beetle assembly line outside of Germany was in Ireland.
The VW Type 1 was rebuilt from a knocked down kit, in the affluent Dublin 4 suburb of Ballsbridge. Nowadays the plant has been replaced by a Mercedes-Benz and VW dealership. To this day the original peoples car has been firmly placed in the hearts of the Irish, but less loved is the reborn 1997 version that owes little to the original of the species.

The original 1938 Beetle was designed by Ferdinand Porsche after four years of development at the direction of the infamous German Chancellor. The Beetle featured an air cooled engine in the rear turning the back wheels. The modern Beetle has a liquid cooled engine in the front turning the front wheels. Even the dogs in the street know that the modern Beetle is basically a styling exercise or to put it bluntly a VW Golf in drag. The underpinnings of Golf are tried and tested but much like BMW’s new MINI the Beetle was design to tug on our heartstrings and desire for nostalgia. Is there anything wrong in wanting a car that looks cute? No, but while the Volkswagen Beetle is fun-looking, it is sadly dull to drive! 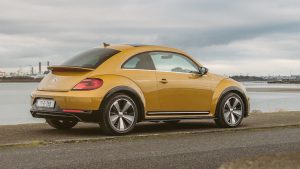 My test car featured the expensive DSG (automated manual) gearbox over the standard manual, and it really suits the Beetle. The exterior is striking and in this colour quite exciting to look at. The 2 litre DSG R Line trim (from €35,350) makes the disarmingly cute car a little edgy – in as much as a Beetle can be edgy! With optional 18 inch alloys added the Beetle turned heads and made me smile everytime I walked up to it. 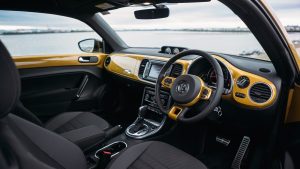 Inside the four seater coupe is a comfortable place to be but a little strange at the same time. The dash pays homage to the original but what was once painted metal is painted plastic letting on to be metal, plus you are never far from switchgear from a Golf. The interior all the same is a bit of a giggle, so good so far, then once you turn the key and drive away your heart sinks a bit. Sadly the Beetle has no driving character whatsoever… the original had loads!

By loads, I mean the old Beetle was noisy, under-powered, wouldn’t stop and didn’t like going around corners. Many drivers used to put a bag of cement or a slab or two in the boot (under the bonnet) to help keep the front of the car down – in fact by today’s standards the original Beetle was lethal.
Most Beetle buyers today don’t give two hoots about driving dynamics but as an enthusiast I’m left disappointed behind the wheel. The exterior is so full of character yet the actual driving experience is utterly normal and sensible. 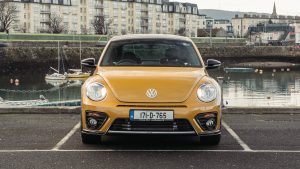 Volkswagen’s Beetle is a great styling exercise built on a proven platform.