Trending
You are at:Home»Reviews»VW California review
By Michael Sheridan on 29/08/2017 Reviews, Vans 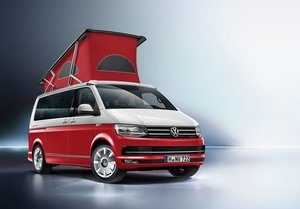 I’m a huge fan of the VW Transporter-based California camper. It is a brilliantly thought out machine. The California has car like ease of use and low running cost yet delivers student apartment like accommodation.

Campers can be monsters and utterly crap to drive and maneuver. If you take a big brick-like camper over 80kph you can actually see the fuel gauge move right before your eyes. 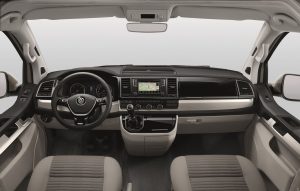 The California, at less than 2 metres tall, has been a big hit for VW with just shy of 90,000 of the Hannover built machines sold to date. The joy of being able to drive an economical camper stress free on tight roads coupled with the delight of being able to access and park in a regular car space cannot be understated. The California is a better facilitator than the United Nations. It lets owners effortlessly tour anywhere, you could follow a band touring around Europe, track Formula 1 races or MotoGP and of course you could just tour for the sake of touring. The latest Californias get a range of new driver assistance systems and the latest infotainment systems with “App Connect” and even adaptive chassis control depending on the model grade. 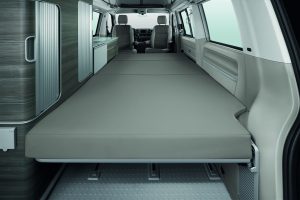 The four seat California has integral window blinds (and a couple of magnetized ones for the driver and passenger windows) and sleeps up to four adults in comfort with two up and two down. The front seats turn 180 degrees and there is a sliding folding table too to help make it a very social cabin. The boot holds folding chairs and the side door hides a removable picnic table. There is an auxiliary heater and lots of cubbys and presses – plus a small fridge, a gas hob cooker and sink with running water from the on board tank.

Three grades are available and feature the usual increase in kit; Beach (manual pop up roof), Coast and Ocean. Engine diesel power goes from ‘sufficient’ to ‘plenty’ and there is a DSG auto option plus four wheel drive can be ordered too. Campsites offer showers, toilets and laundry facilities so whats not to love. My test California Coast weighed in at just under €59,072 including €5,772 in optional extras that included an awing (€601) and a programmable air parking heater with remote key control at €2,294.

The VW California is a machine I’d buy with my own money – and there aren’t many of those! 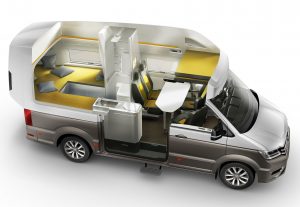 If you hunger for a larger experience VW Commercials has just announced the new Crafter based California XXL.

The Crafter is a brilliant large van so it was only a matter of time before the designers furthered its potential with the California treatment. The new California XXL ‘concept’ will take a bow at this year’s Caravan Salon in Düsseldorf (26 August to 3 September 2017). The California XXL Concept is equipped with a fixed high panoramic roof, an extended rear section with a large bed, an alcove for a children’s cot, all-wheel drive, pneumatic suspension and a new interior that VW says is planned down to the last detail. Having driven the Crafter, in all its sizes, on Irish roads the California XXL would actually work. Unlike flabby American inspired RVs the Crafter is a well proportioned machine that is designed to manage the city.