Trending
You are at:Home»Reviews»VW T-Roc review
By Michael Sheridan on 06/11/2017 Reviews 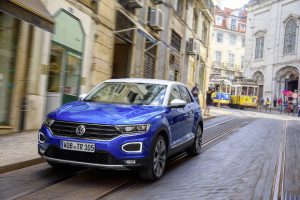 There was a time when car buyers could easily pigeonhole cars into categories. A compact car was just that, a small car was a size smaller and so on. With the ascension of the SUV crossover bodystyle the lines have become very blurred.

Volkswagen has just 15 years experience building SUVs, but it has got up to speed quickly. With the latest Tiguan the Wolfsburg fudged the demarcation lines further. The once Golf-size crossover took a teenage growth spurt and outgrew its class. The price increased, not by much, but enough to make the spacious five seat machine appear expensive compared to rivals like the Hyundai Tucson and Nissan Qashqai. The new Volkswagen T-Roc is slightly smaller than a Tiguan with a cheaper price point, aimed squarely at a younger audience. Volkswagen says its new Portuguese built machine will play a key role in the expanding SUV market, that has it has seen exponentially growth since it launched its first Touareg in 2002. 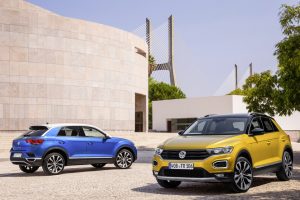 The T-Roc is an instantly likeable crossover that when viewed side on is far less high rise SUV and more sleek Audi A3 Sportback. The crossover look T-roc enjoys is thanks to a low set roofline and a sloping tailgate. The T-Roc is built on the same modular MQB platform as the VW Golf so there are lots of shared components. The new five seater at 4234mm is shorter than a Golf (4258mm) but taller at 1573mm (Golf 1452mm). The T-rocs impressive stance is due to a track width of 1.819mm (Golf 1790mm). The front or all wheel drive T-Roc is closer in size to a Fiat 500X and a little smaller than its sister car the SEAT Ateca. The T-roc has a 2.6 metre long wheelbase between front and rear wheels and its short overhangs add muscularity to its appearance. Clever bodywork creases and bulges give off an air of strength and the only controversial styling line to my eyes is over the rear wheel arch. Depending on the grade the T-Roc has impressive daytime running lights that are quite distinct. 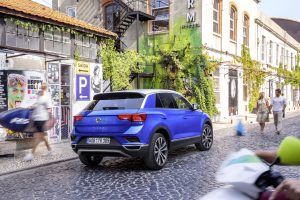 All our test cars featured high trim levels that had funky colour coded panels on the dash and door pockets. The interior vibe was quite Beetle like. It had been a while since any marketing type outlined to us an intended target audience but the brave VW soul was eager to point towards young hipsters and beach ball throwing youths, who no doubt should want a T-Roc. In reality with pricing starting in the mid twenties and the version you want costing closer to the low thirties it is perhaps young parents or anyone who is moving from a VW Polo to a Golf who will likely skip the perennial hatch and go straight to the new crossover. 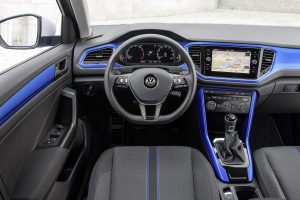 Inside the T-Roc features all of the familiar VW switches and displays were are used to in other VW models but it is that little splash of playfulness that makes the T-Roc’s interior more exciting. The cabin is far from large but five people will fit and I could sit behind my own drivers seat with just some leg rubbing. There is enough headroom despite the low roofline and vision is good although the B pillar could be thinner. The dash layout is simple and clear. Just like with the latest generation Golf there is a centre touch screen that is simple to use. Connectivity is class leading with VW’s Car-Net with its apps and online services and option. 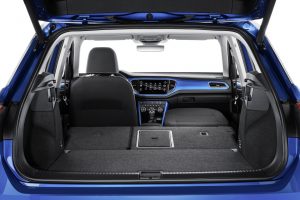 The boot holds an impressive 445 litres and under the high boot floor is space for a spare although our test cars had inflation kits.

Two 4Motion (all wheel drive) test cars were available, both with 2 litre engines, one petrol the other diesel and both automatics. The 2 litre petrol TSI delivered 190hp and was shod with 19 inch Suzuka alloys and low profile tyres. The entry grade T-Roc gets 16 inch alloys – so unless the suspension was particularly forgiving one could expect a choppy fidgety ride. Surprisingly the T-Roc delivered a comfortable and pliant ride. On a variety of roads the T-Roc proved near effortless to use. Drive select allowed me choose from a selection of driving styles but with ample power on tap I kept the five door in normal mode most of the time.

The 2 litre 150hp TDI diesel proved a less enjoyable experienced than the smooth petrol engine. Unlike the sprightly and hushed petrol the diesel felt utterly dull in comparison. Sadly there were no front wheel drive T-Rocs or 1 litre TSIs to test but the T-Roc showed an ease of use that impressed us. The high driving position (572mm above the road for the front seat occupants and 618mm for the rear) coupled with its chunky good looks will be the X factor that will steal customers from not only VW’s own Golf and Tiguan but from rival brands also. Ironically our test cars weighed in close to well specified Tiguans on price.

11 exterior paint colours are available and there are four optional contrasting roof colours that can make up to 24 exterior colour combinations. A wide range of interior trim colours and material choices add more customisation. In all there are up to 80 combinations in total. 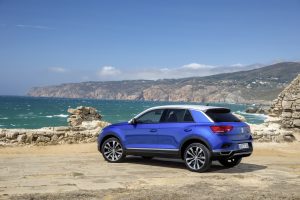 Three grades are available T-Roc, Design and Sport. The entry grade has the headline grabbing price point of €25,525. Volkswagen Ireland says the entry grade will represent only 9 per cent of sales in 2018. The level two Design grade will dominate at 52 per cent, while the remaining 39 per cent will be the Sport grade.

Six engines are available in Europe (four from launch), three diesel/three petrol. Engine capacity ranges from 1 litre, 1.5 litre up to 2 litre in size. Volkswagen Ireland says 50 per cent of sales will be powered a 1.0 TSI (115hp/200nm) three cylinder petrol engine that we are familiar with from the latest Golf. Diesel power will account for 37 per cent of sales with the familiar four cylinder 2 litre (150hp/340nm) TDI available from launch. A less powerful but more affordable 1.6 litre TDI (115hp/250nm) is coming this Spring.

4 Motion permanent all wheel drive is available. It distributes engine power between axles via an electronic multi-plate clutch. 4Motion comes with an active control drive rotary dial that lets you select the type of terrain you are attempting to traverse and modifies power delivery accordingly. In Ireland front wheel drive versions will be the dominant sellers. 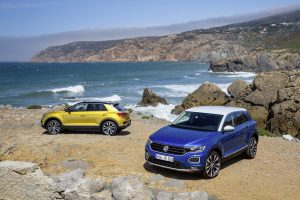 Today Volkswagen says about 6.4m compact SUVs are sold globally with nearly 80 per cent of sales in Europe and China. Volkswagen clearly wants in on the action. The VW SUV range now includes T-Roc, Tiguan, Tiguan Allspace (7 seats) in Ireland and Atlas (large SUV developed for the US) and Teramont (China’s version of Atlas). A new Touareg and baby T-Cross are on the way along with the electric zero emission I.D. Cross. A GTI T-Roc has been ruled out but an R performance version is on the cards. As for the T-Roc name, T represents its VW siblings Tiguan and Touareg and the Roc is for, eh, rock! Who says Germans don’t have a sense of humour. The T-Roc arrives in Ireland in mid December in time for the 181 registration period.