Trending
You are at:Home»Reviews»VW up! GTI review
By Michael Sheridan on 23/04/2018 Reviews 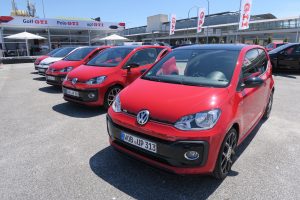 The joy derived from driving a car that is a bundle of fun cannot be underestimated. The Volkswagen up! is one of the best city cars but the new 115hp/200nm GTI, yes GTI, is one of my favourite cars… full stop!

Honest and adorable, the little three (or five) door at 1,070kgs may weigh a little more than the original 1976 1.6 litre VW Golf GTI but delivers similar performance. The clean TSI engine delivers 0-100km/h in just 8.8 seconds through its manual gearbox and top speed is 196km/h. The sensation of speed in the tiny car makes it feel quite quick. I drove the up! GTI on the Ascari racetrack outside Ronda in Spain and was utterly charmed by the three cylinder petrol’s spirit. 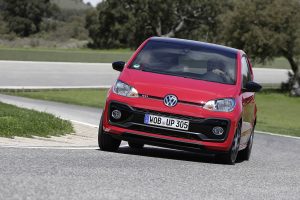 I was at a press GTI celebration event and the up! GTI was the least powerful machine there – but the one I and many others wanted to drive the most. I seized the chance for my first drive in the pint sized rocket and wasn’t disappointed. The Ascari race track features copies of some of the World’s best corners and it also has a very high grip surface. I chucked the tiny car about the place and it went where I wanted to go , albeit at times with a bit of opposite lock. The car is a blast and punches way above its weight. 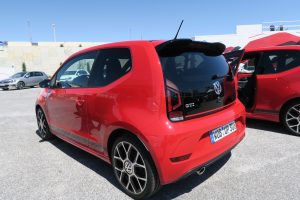 The GTI badge on the tailgate is not the result of a sad owners desire to impress but a factory fitted genuine GTI badge that has been earned. It brings a smile to your face as do the red stripes running along the radiator grille and red brake calipers. Exterior colours include pure white, red, dark silver metallic and black pearl. A contrasting black roof is available with white, red and silver cars. 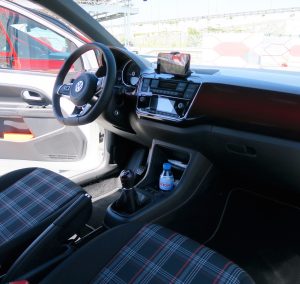 Inside the familiar ‘Clark’ tratan GTI cloth fabric covers the seats. The front seats offer little in the way of lateral support but are comfortable. The driving position could be slightly better but there is a certain degree of flexibility. The noise the little three pot engine makes is artificially enhanced and at times almost sounded like a meaty five cylinder. The main difference driving compared to a standard up! is the available power. 115hp means that overtakes are on and spirited driving is rewarded. The GTI can hold its own at motorway speeds too and will effortlessly fill the rear view mirrors of cars twice the price. In terms of controlling stability control and the engine mapping etc. well buyers should look elsewhere. The engine is Euro 6 compliant and features a petrol particulate filter that gives it some degree of green credentials. Connectivity comes via VW’s smartphone mount on the dashboard.

Under the stricter WLTP fuel consumption testing the up! GTI returns an average of 5.7 L/100km. Sports suspension delivers a lower ride height and this helps reduce roll when cornering hard. 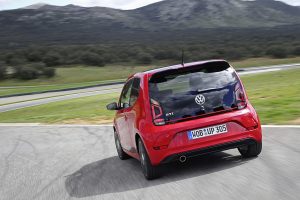 Now the bad news is that the UK has taken up more than all the right hand drive allocation and as I write there are no cars scheduled for our market. In Germany the car costs in the mid teens but in Ireland it would be closer to €22,000. VW Ireland clearly knows how good the car is thanks to an army of UK journalists and a couple of Irish at the event – including me. The baby GTI is brilliant. Can I suggest that any potential customers plague their VW dealerships to get the car in as pester power might work.

The Volkswagen up! GTI is simply super.